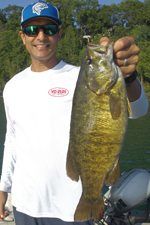 In 2007 he sold the Bassin’Fan and was locked out of the sport (noncompete agreement) til 2010. When he came back, all he knew for sure was that he didn’t want to do another BassFan, and that whatever he did had to be unique again. So he came up with BassGold and the daily (almost!) BassBlaster – he figured the bassin’ world needed the sense of humor and insider knowledge only he could muster up.

Guess he was right because the BassBlaster became the #2 daily read in bassin’ pretty quick, and it’s still trending up. Hope you enjoy it, bass-heads!