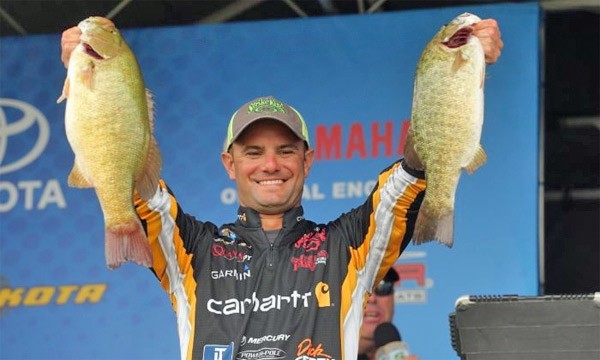 > “I wish it was something easy where I could say, That’s what made it happen. I just trusted my abilities. I was [almost] getting kicked out of the Elites [after ’16] but made a check in right about half the tournaments I fished so I knew I could catch ’em. I just needed to believe in myself, practice smart and fish smart.

> “All the guys know how to catch ’em. All of them are sound in what they do [skills-wise]. It all comes down to making good decisions in the little bit of time we’ve got.

> “I put myself around a lot of fish. I go where I think I can catch the most fish, where I have a chance to catch quality.

> “I really believe God put me on the earth to be a fisherman. The way I won the college deal, this maybe is what I’m supposed to be doing, and it’s what I wanted to be doing. I really gotta trust Him that I can make good-enough decisions to hang.

> “Everyone’s got the same amount of practice and a lot of the same equipment. You just have to fish your way and make good decisions.”

What does making good decisions mean for the Elites?

> “It’s a lot of different things…tough to describe. A lot of times, even in practice, it’s so easy to start out swimming a jig and 2 hours later you’re still doing it and you haven’t had a bite yet. You’re not thinking, just casting, just trying to run into them.

> “The guy who does well, he puts his boat in the water and immediately by something he sees or feels — his instincts — he’s changing it up. He really understands what’s going on.

> “The clock’s your enemy. You gotta decide now — this isn’t working out, am I doing the right thing? It’s a lot easier said than done. A lot of things go into it.

> “Justin Lucas — he’s a thinker like I am — said when he was doing well he didn’t leave a spot til he felt like he caught all that was there. I realized this year there’s usually a lot more fish [in a good spot/area]. Swindle told me when he won AOY, he fished slower than he ever had.

> “So I try to start in an area where I’ll get some bites, and realize if I swim my jig in a 400-yd stretch of grass and get 3 bites, I should turn around and go back — not leave — and I’ll probably get 2 more. There’s usually a lot more fish in an area than I realized.

> “A lot of little things go into the [decision-making] equation. It changes all the time, and I’ve just got to adjust to it better. It’s just instinct, and the more tourneys I fish, the better I get at it.”

Are he and Jordan helping each other?

> “I knew before anyone else did that Jordan wasn’t going to go out there and suck. If he gets on a pattern, it’s easier said than done to ignore it and do your own thing. It was tough for me to ignore….

> “I’m doing my own thing — not relying too much on what my brother’s doing. In the past that’s not worked out well for me.

> [Example:] “At Champlain, I knew fishing deep rocks in the Inland Sea was a big deal that time of year. Jordan didn’t get a lot of quality bites in practice doing it but I did. So I thought if I could get enough bites and run enough stuff, I could have a good tournament. [He finished 12th, Jordan finished 8th.]

> “A lot of times when both of us do well, people think we’re doing the same thing but we don’t know where each other’s at. Champlain [they were fishing] different.”

> “There’s no sense in fishing scared if you’re going to fish. You fish to win. Don’t think, Am I going to catch them, Am going to requalify. Know that you can, an dgo put them in the meat locker.”

> “The odds of me winning the college championship aren’t very good, and the odds of Jordan winning it the next year — for it to happen to both of us, you can’t tell me that’s by accident. I really think there’s a bigger purpose.”

How Dean Rojas skips and CURVES a frog!!
WHY WE BUY BAITS