One reason the bassin’ biz is cool is you get to go places. On the media side you don’t get to fish ’em all (wah), but one I do get to fish is the Niagara River/Lake Ontario/Lake Erie out of Niagara and Lewiston, NY. BIG smallies. Love it.

It’s drivable for me, so I dragged the family up there for a few days last week. Wife doesn’t like to fish, kids do, but my wife was into the whole Niagara Falls thing — which I honestly wasn’t…at first.

We caught some (or rather, my kids did lol)…

…and I unknowingly hooked a 100-lb sturgeon on Lake Ontario…seriously. Got a bite, set the hook, and…nothing. Thought it was a snag, then something was coming up — felt like a piece of wood, and our guide Frank Campbell thought it was a clump of zebra mussels.

So we were all basically not paying attention til a HUGE splash. We all looked to see this giant, freaky-deaky-looking fish jump out of the water. My tube flew out and…whoa.

With the tough bite we quit early. No sense beating up the kids and making them not want to go the next time.

That night we went to Niagara Falls — actually it’s two falls and I think neither is actually named Niagara Falls. Pretty dang cool! All lit up by the crazy Canadians: The Canadian side is all commercial and the U.S. side is all natural.

Stayed for the fireworks, bailed, kids and wife were stoked, all good.

Next day was all falls. First up, Cave of the Winds — which isn’t a cave. You’re just walking pretty much under the American falls. So much fun — was like a Disney Ride except no wait, lasted a long time, and you were part of the ride instead of strapped in. Max stokeage dude: 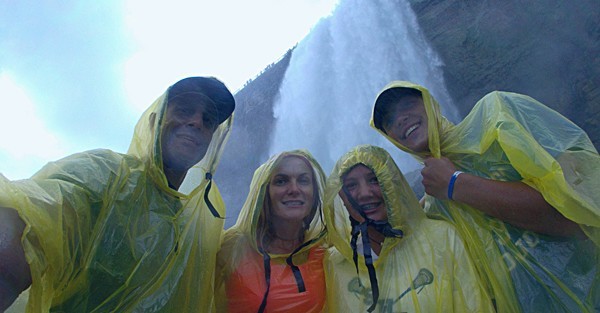 After that we had one temper tantrum (lol), then hit the Maid of the Mist boat which goes on the Niagara River close to the falls. Crazy: 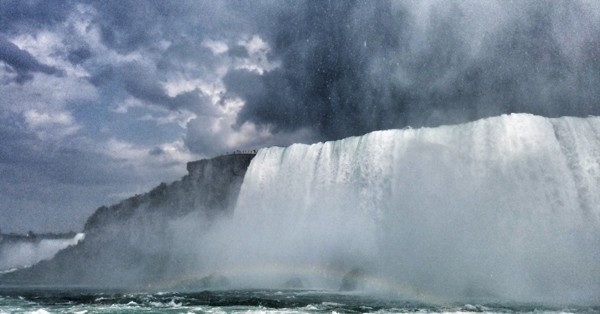 Bottom line for us: The vistas of the falls are cool, but being as close to the falls as we could get was the coolest. So big. So loud. Getcha all jacked up.

Next day we went fishing with Capt Frank again. Bite was better, still not off the chain but can’t recall too many times in my life when it has been thataway so…. The kids were catching again — but my daughter was jackin’ ’em without even trying so my son, the fisherman, was getting pretty ticked. Which was pretty funny. (My daughter caught the most fish both days.)

I was even catching some hahaha! Honestly tho — they were resorting to live crawfish which of course I refused to do.

Near the end of the day the fish started to wake up. Still not crushing them, but better size — like 3+ lb fish. We decided to make one last drift, and here’s what happened literally on our last cast: 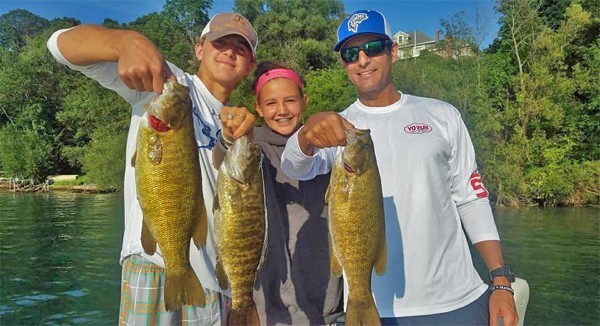 That’s a 4+ , 3+ and 3 — not bad yo! I wanted to make that drift 10 more times but my kids voted to head back on a high note. They were right…probably. (Frank told me later that he probably would’ve made that drift again too..lol. Bass-heads — we’re all the same hahaha!)

The 2 days we fished, dragging tubes — which typically is $$$ there — was not the deal. So we dropshotted. Was key on the second day to get the bait above the grass that was all over the bottom. 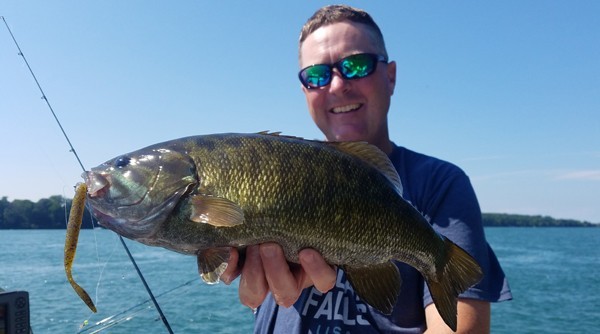 …and I was using the back 2/3 of a YUM Dinger (ghillie suit), nose-hooked. For whatever reason, that color was the only one I could get them to bite. No purple in it, which is key in gobie-land, but it did have gold and red flake:

Just nose-hooked it, and we used 1/2-oz Strike King Tour Grade Tungsten Drop Shot Weights. Also caught a few wacky-rigging a full-sized Dinger in the same color on a tube jighead. Sketchy-looking rig but it works! The fish hit the full-sized Dinger harder, but too many weeds down low to keep using it.

If you go, make sure you have:

> If you pull your own boat, make sure everything is in order because I’ve never seen a higher enforcement to recreational ratio anywhere. USGC, Canadian coast guard, police, customs — expect to get checked. May not happen, but be ready for it.

> You can now cross into Canadian waters without jumping through hoops, but you must have a Canadian fishing license to fish there.

> If you stay at the Niagara Crossing Hotel in Lewisville, the river and ramp are literally right there. Tough to beat.

> If the lakes are rough, don’t go out unless you 100% know what you’re doing. Seems like the Niagara River is always fishable, but those lakes are big water.

> Don’t count on the weather forecast, good or bad.