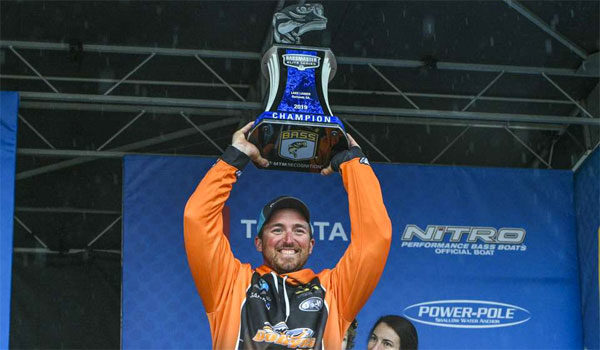 This was Paul’s first Elite win, and even though he’s been in the hunt before I don’t think any tournament has lined up for him fishery- and conditions-wise as well as this one did. Not that it was easy…. Here’s how he did it.

> “I didn’t scout this lake. This year I decided primarily not to scout. The first 4 years on the Elites I scouted on and off. I think some events you have to scout, some you don’t…can hurt and help. I felt it’d probably hurt me if I scouted this one…I’d have a preconceived deal. I felt this one would fit my style, I felt I’d have all the tools to do it and just needed to see it when I was there.

> “I was able to break it down pretty quickly — I wanted to be mid-lake to the dam. …map study and looking at results from FLW…. You have to study as much as you can…use it all as tools. I learned from [the FLW tourney] it would be won mid-lake and down. That fit more my style anyway.

> “Without the Garmin stuff I would’ve been lost. The lake is big. …LakeVu HD mapping is incredible. When they go to a lake and survey it, it’s best map I’ve ever seen out of anybody.

> Those fish are so spooky, you would not image how spooky they are. In 45′ there’d be a school of them, and if you get within 30′ of them you’ll spook those fish — and you’d never see that without LiveScope Panoptix. I had it [pointing] 80′ out so I knew how many fish were out there.

> “So between Panoptix and mapping I quickly learned what those spots related to…established what depth the fish were at.

> “I had 3 different things going on in practice and only 2 materialized in the tournament. One was a ditch deal…got on day 3 of practice, shallow cranking deal. I never exploited it, but turns out a lot of guys in the top 10 did. I didn’t feel like you could win doing it.

> Days 1 and 2 of practice I spent looking mid-lake and down, covered a lot of water…found schools. Certain things…schools vs 2-3 fish on spot: long points, long ridges or saddles between….”

> “Picture a long point coming out…turned into a saddle…29′ high spot, dipped into a 45′ saddle, then came up again to like another point at 32′, then dropped back into deep water. The narrow ridge between those 2 high spots created a saddle, where a school of fish was. I think the only reason they stayed there…extremely tight contours came up both sides of that saddler/ridge and so much bait was close by that the food was there…food coming to them on both sides.

> “The key was [the bass] never left. A lot of these places…too big of an area, they just roamed more. This spot was a condensed version of other places…. I looked for other places like it but I never could duplicate it…if the wind shifted [on the other spots], they would move.

> “How is it possible on blueback lakes [to have a spot where the bass don’t move]? There’s no logical explanation. The only way I can describe it is God wanted it to happen. I thought they’d move — they did everywhere else.”

> “The gameplan was to fish ditches in the morning…have to capitalize on the morning bite. I didn’t feel strong about the deep fish in the morning as spooky as they were. Thought I’d get a good solid limit in the ditches, then upgrade out deep.

> “When it’s sunny like that, you have a small window — when the sun gets up, the [ditch] fish shut off. Before the sun was up, they’d get in the back of the ditch…as the sun got up they’d pull back to the mouth, suspend over timber and scatter.

> “I left that ditch with 13-14 lbs [caught on his Freestyle rig, detailed below]…upgraded in another couple ditches. At that point it let me start looking around. I tried different stuff, didn’t work…schools moved.

> Then in the mid-lake area…found that winning spot. East side of the main lake…I hadn’t looked at any offshore stuff there. I was running down south…. With that [Garmin] depth-shading…stuff sticks out even when you’re zoomed out. I saw [what ended up being his key area] and thought, That looks really good.

> “The were sitting around brush, but not big brush. I culled out 2 on that spot with that Freestyle deal, which gave me 17 lbs. That day I caught everything on the Freestyle.”

> “It was cloudy and windy. I go to that ditch…still fish in there. All were 2.75-lbers — I wasn’t going to win with that, but I thought maybe I’d need those fish. I fished that ditch then some other ditches I hadn’t fished yet and caught maybe 3-4 fish…weren’t of any size. Not the deal.

> “I was in the area so I went back to that spot where I culled [day 1, what ended up being his main spot]. I was still in Freestyle mode — I hadn’t caught a single fish on a swimbait in practice, but I wasn’t looking to stick fish.

> “I pulled up…started looking at them, they’re moving, they’re boat-shy, I can’t get the bait in front of them. I’m starting to get frustrated. So I was like, Let me pull the boat way off, put on Spot-Lock and I’ll try a swimbait.

> “I bring it right down the ridge on that saddle. The first cast was 3.75-lber. [He eventually] upgraded to 18-04, all on the swimbait. I culled out everything I caught previously.”

> “I started off there, but I was just catching 2- to 3-lb fish…where did the bigger ones go. [He left]…never went back to it, struggled rest of the day…poor execution. I felt like I really dug a hole…had an opportunity to catch another 17- to 18-lb bag.

> “It was nasty, rainy, wind blowing in the total opposite wind direction of the day before. I went to the money spot, caught a 3.75 and 2.75 then let it rest. I started rotating through different stuff…schools were gone.

He caught 1 on the Freestyle rig in a deep ditch (40′) and another on a brushpile at the end of a point on a Neko/wacky-rigged 5” Senko (watermelon) with a 3/32-oz Dobyns D-Nail Weight:

> “…some schools suspended in trees so they were spooky…not catchable. They’d follow the bait to the boat and then spook. Once they spooked, I never set back up on them.

> “I had 13 lbs by 12:00…way behind the 8 ball. I had a Bible verse I wrote on my hand with a marker. Psalm 37:5: ‘Commit your way to the Lord; trust in him and he will do this.’ It was a down moment during the day — I looked at that and it gave me confidence. I felt like the Lord was telling me to go back to that primary spot.

> “I weighed my heaviest bag, but it was the hardest fishing day I had. Just bigger bites. When you have tight tournaments like this, sometimes it comes down to one big bite.”

Most of his fish were on a swimbait:

> 1/2-oz Do It Molds Herring Head underspin mold. “You can make a jighead without the blade. I like the jighead — it has flat sides, which makes the swimbait roll side to side. The hook I use in that is a Gamakatsu Jig 90 style 111 in 3/0.”

> 3/16-oz Do It Molds Freestyle Jighead with a #1 Mustad 32746 hook (90-degree jig). That 3″ Bubbling Shaker is such a skinny, slender-profile bait you can’t rig it on a lead-barbed jighead — it will push out the bait… This jighead has a wire keeper, and more weight forward on the jig gives it a tilting/rocking action.

> “The whole key is matching the hook size to the bait — that #1 is a crappie hook. It’s the same stuff I use for crappie…also a cold-water smallmouth killer.

> The jigheads were plain, unpainted. “I poured a whole bunch of them last minute. Something told me to do that right before we left for FL.”

> “Seemed like if you lost a fish after sticking one, they’d smarten up real fast. Could tell…fish get a lot of pressure. They’re similar to smallmouth in the places they set up but they’re way harder to catch.

> “You have to stay humble so it’s all about Him. It’s really cool how many people were watching it at an outdoor expo back home…some people who never go to church think the only way we hear from God sometimes is through other believers. So the opportunity to give a testimony was pretty cool.

> “Just give credit to where credit’s due — I’ve been like that since day 1. All my success has come from God….”