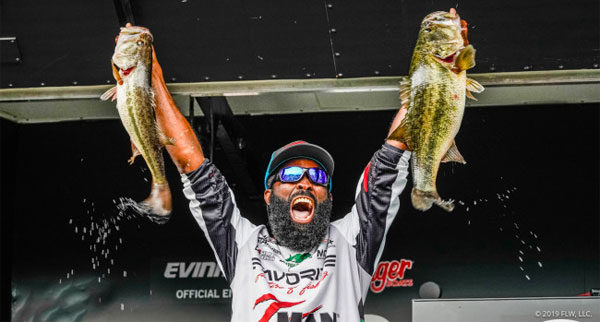 Sounds like Brian got his first big win doing stuff other folks weren’t doing. Here’s how it went down.

> “What really set the tone of this tournament was the first day of practice. We had some real bad storms…a squall line came through that night…we had short day of practice day 1.

> “I was fishing in the river — I never made it to the lake — and found something special. I found a little deal cranking…a current seam on a sandy point in the middle of a spawning bay. I just had a feeling about it even though I only caught 2 off it. Even though no one fishes the river, I felt like it was something I could fish on the way down to the lower part of the lake.

> “The first day of the tournament I stopped [at the river spot] and had 17 lbs in like 20 minutes. I caught 10 keepers off it and backed off, figuring I needed to try to save it. Blastoff was at 7:00 and I was culling at 7:37. It wasn’t every cast, but just about every cast.

> “The next 2 days, I never caught another one there.”

I asked him if that let him save some spots:

> “Yeah God just does crazy stuff sometimes. I have 17 lbs after thinking 12-13 would be a good day for me. I planned to pair that cranking deal with sight-fishing little canals on the Flint River. Since I had 17, I didn’t see anything in those canals that would upgrade me. The only thing I felt like I could do that with was flipping grass — I’d had 1 bite on a main-lake flat that was 5 lbs.

He checked his cranking deal the next 2 days but didn’t get a fish, and since he was in the hunt decided to focus on flipping the flat:

> “That flat goes for 4 miles, but there’s little sections where the river channel swings in close…. Also where I was fishing was mainly hydrilla, but it had patches of milfoil. [Area depth was 7-9′.]

> “I was basically punching submerged mats of milfoil — not to the surface, but I could see them when the water cleared up. They came up through the hydrilla and created a cavern, and the fish were sitting in those holes.”

He flipped a few areas repeatedly to get bit. Day 2 he had 7 bites, day 3 he had 6 bites and day 4 he had a few bites more but only landed 5.

Baits and how he fished ’em 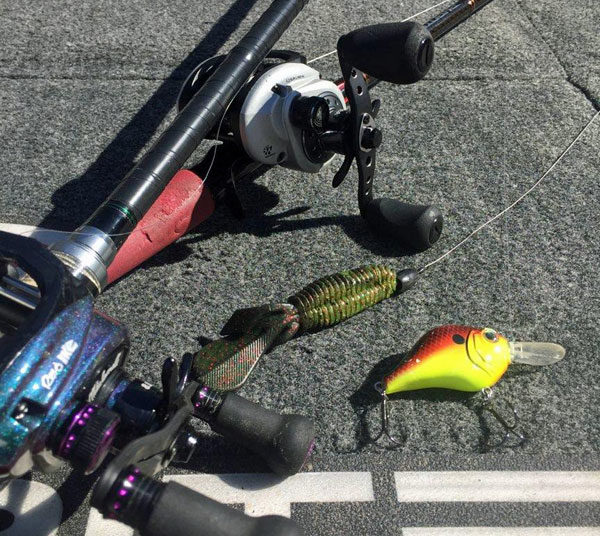 > “The fish were in knee-deep water, like 18″. It went from knee deep to 8′ in a rod length. You’d be digging in that sand, and as soon as it broke free it’d be on lockdown.”

> “My glasses were really important — I was really kind of sight-fishing. Everyone thinks about that in the context of spawning bass on beds. But something special happened on day 2 — when the water cleared up, I could see those milfoil heads. Wiley X glasses [he used the Gravity Series with a blue blue mirror lens] have a gasket behind the lens which is designed to keep dust out but it also blocks out more light. So I could see the milfoil heads below the water. Every day the wind would change directions and blow mud onto the flat, and those heads would get harder to see. So having the right glasses really helped me see and pick apart the structure.”

> “You can’t be still and control the boat without Power-Poles.”

How Paul Mueller won the Lanier Elite
How Ott DeFoe won the TN River Classic
To Top
We use cookies to ensure that we give you the best experience on our website. If you continue to use this site we will assume that you are happy with it. Cookie settingsACCEPT
Privacy & Cookies Policy