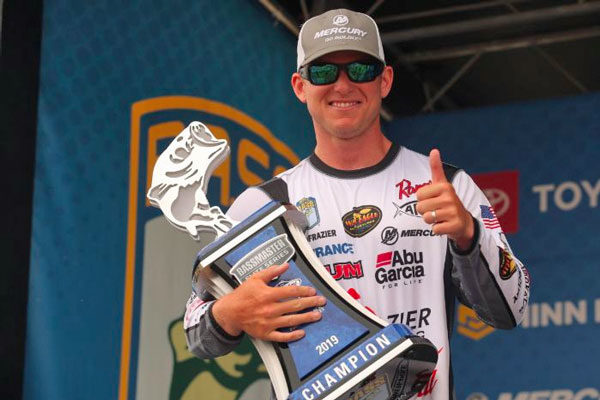 First let’s get this straight:

> He went from 10th to 1st in 1 day
> 5 lbs outta 1st to start day 4
> Made up that margin over a BUNCH of sticks on a SMALLMOUTH river, meaning no chances for 8-lb bites to leapfrog folks

How ’bout that?! Told Micah he honestly wasn’t even on my radar to possibly win that deal, didn’t think it was possible. He said:

> “I didn’t either. I just went out fun-fishing, no pressure. It was just a special day — kind of a blessing. If I would’ve thought I had a shot, I might not have caught what I needed.

> “…coming from that far back…no pressure til I caught that 6-lber. Then I kind of had a feeling it was gonna happen — which is really weird coming from me. I’m really not the kind of guy who thinks I’ll win every tournament. With that 6-lber I had over 20 lbs and it was just one of those magical deals. It felt like it might be my time to win one.”

Aaaaaaaaand — that’s how it went down. He sacked the biggest bag of the tourney and won it. Np mang! And he used a dang do-nothing Neddy Flanders Rig all 4 days! Why that vs the ol’-reliable dropshot:

> “So…couldn’t wait to get back and drag a Ned Rig. It’s one of my favorite ways to catch ’em…lot of confidence in it up here.”

> Gp: “…just a good all-around color. Smallmouth aren’t the most intelligent fish in the world…they see that little thing scooting across the bottom and they just want it.”

> Prototype color: “The bottom is purple and the top is gp. The thought process behind it was gp in the morning and deeper — lower-light situations — and as the sun got up [and fishing shallower] I started using the other one…don’t think it mattered….

> “I used all kind of generic mushroom Ned heads — 1/8-oz up shallow and 1/4-oz deep…black and gp. They all had good hooks…not sure what hooks they were….

> “Those rods and reels were key — I think that’s the lightest spinning reel on the market. Drifting my bait in 40′ and 50′ of water, if a fish picked up my bait I could feel the difference. It’s one thing to have a light setup when you’e casting a shakey head, but when you’re doing the drifting deal you really gotta know what’s going on.”

> “I was fishing shoals…like 90 degrees [to the current]…with the current flow across them. I can’t explain [why those ones] — the ones that [were perpendicular to the current] — got the bigger bites.

> “I just would kind of control the drift a little…try to keep the bait under the trolling motor. You could let it drag and feed it line, but it would get hung up all the time. The more vertical I kept it, the more productive I was. It protected the line better too…not snagging in all the mussels.”

> Electronics (Lowrance HDS-12 Lives): “…pretty straightforward. I did stare at ’em all day long, moreso to make sure I hit my waypoints. There were a few key little stretches on these deals…move around a little to drift across the right spots. The bait would be a little bit behind the boat.

> “If I saw an arch down there I’d maybe slow down a little bit and let out a little line to try and catch that fish. I caught several after I drifted over them.

> “It’s not much different than the way you’d drag a dropshot. If you learn how to drift a dropshot or a tube, it’s the same deal…. There’s an art to it, but not any different than any other bait [you drag].”

> Late takeoffs: “I think it made it better because the afternoon bite was so good.”

> In the day 4 weigh vid he thanked Stetson Blaylock for hippin’ him to some feesh.

> “That Z521L Ranger with the new Merc V8 is bad to the bone. I’ve been impressed with it all year…it’s one of best big-water boats I’ve ever owned. The motor has so much low-end torque you can really manage those big waves….”

How Jacob Wheeler won BPT #7 on Table Rock
How Edwin Evers won the BPT Redcrest Championship
To Top
We use cookies to ensure that we give you the best experience on our website. If you continue to use this site we will assume that you are happy with it. Cookie settingsACCEPT
Privacy & Cookies Policy