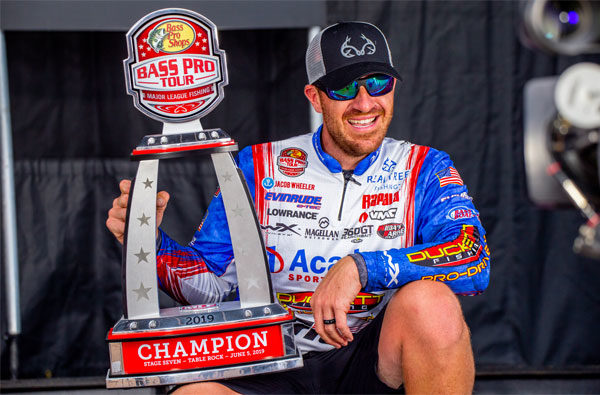 J-Wheels finished 5th in BPT #6 on the same lake 10 days prior, so you could say he had a good starting point…BUT the other guys who finished high in #6 didn’t do as well in #7, maybe because a lot had changed. Here’s how it went down for him.

But first, in the last tournament he fished the shad spawn in the morning with a swim-jig, then fished shallow for spawners with a buzzbait, wacky worm and a little flipping.

> “…it completely changed. It got warmer in the 10 days we were gone and all these schools of fish started to show up offshore…smallmouths, largemouths and spotted bass mixed in on some places. Depending on what section of the lake…some places you caught all 3.

> “…post-spawn offshore schools of fish. The main 3 things this week were brushpiles, isolated cedar trees then…bluff end points and big long main-lake points where schools of fish were relating to the current and hard bottom…. 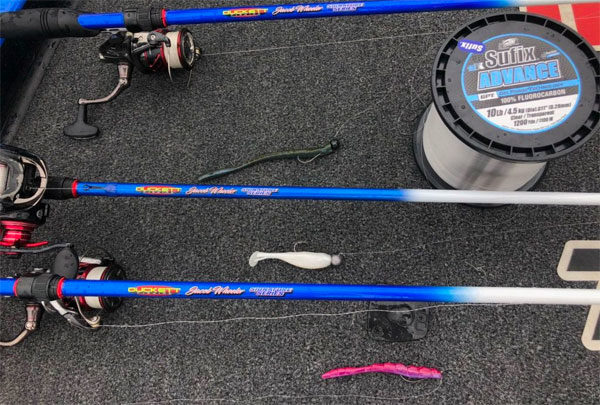 > “When you had a school of fish grouped up offshore, you could catch them almost every cast on that swimbait. You could [catch them] on a dropshot but not as many because you could stay off them with the swimbait.

> “That was the deal throughout the week, but as the pressure got to those offshore places, you had to go more finessey…so I used a dropshot the last day. I had 3 dropshots tied on.

> “Those fish were suspending on timber. The last day the biggest thing is it was so calm and still, the schools of fish on those points ended up suspending around the timber on the outer edge of the points. I figured that out at 10-11 am, and that’s how I caught a lot of my fish.”

> 4″ hand-poured (morning dawn) and Googan Baits Slim Shake (morning dawn) TX-rigged on a 1/0 VMC Neko hook. 1/4-oz VMC tungsten weight, 8-b Sufix NanoBraid to 10-lb Sufix Advance Fluoro: “I pumped [the fluoro] up to 10 because when I fired up a school I didn’t want to retie all the time. Plus I broke off a few earlier in the week on 8-lb….” Rod: 7′ 2″ MH signature Duckett Spinning Rod.

> “When the schools were acting funny and wouldn’t bite a swimbait, I tried to stay off them as much as I could. I cast a 1/4-oz VMC shakey head with a Googan Baits Slim Shake worm (blue baby) on the same dropshot setup.

> “I caught a few fish the last day on a swim-jig on docks like in the first tournament, and also a few fish on on deeper docks with a wacky Neko rig…1/16-oz VMC Neko weight, #2 VMC Neko hook and a Googan Lunker Log (baby bass).”

> “If you didn’t have good electronics, you couldn’t line up on that stuff.” He uses Lowrance HDS-12 Live units.

> He said graphing/fishing Table Rock was similar to Chickamauga, but “I downsized a little bit because the forage is a little smaller.”

> Duckett Jacob Wheeler signature rods are just at Academy right now, but will be at a lot more places in the fall.