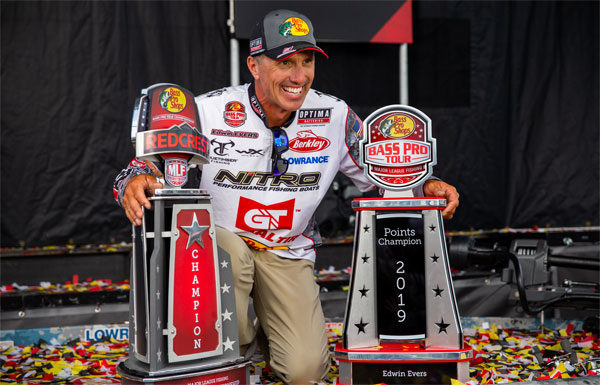 Edwin Evers has had a pretty good year, a solid 7 outta 10.

Bahahahaha what?? Edwin had a year I guess no one else has had in the history of pro bassin’. Because of the new BPT, but also because he won a tournament, AOY/points, and the championship all in the same year — crazy! Had to ask him first — what up with that??

> “I just ended up in a great location [championship round] morning. They came up schooling right in front of me as I’m waiting for lines in, and I’m thinking, That’s a pretty good sign…made a good decision.

> “…you know we didn’t get a practice. I had a few spots I felt like I could catch some fish, I just prayed I’d be in the right one….”

Then I asked: Before this season did you have a sense that you would do so well fishing the MLF format?

> “No. With these 80 guys…I told my wife, ‘If I can just make the championship and maybe make 1-2 Cups, I’ll have a great year. …no idea I’d have such a good year. It’s an amazing field of people to compete against, and it’s a very fine line between a high finish and low finish.”

Not sayin’ he’s lyin’ but he did beat Greg Hackney by 45 lbs…not really a fine line…. Next I said: Did you discover anything about the format that you kept applying this year?

> “And you’re never ever out of it. In the old format, you can definitely be out of it with an hour to go. But here you’re never, ever out of it. And I don’t think all of us have truly grasped that. You can be in last place with 30 mins to go, and find the mother lode and win the thing.”

His Redcrest practice and plan

> “…in the past on the MS River…2 approaches: schools of fish — high percentage areas that hold groups of fish whether it’s 5 or 20 — then you have miles of the same stuff where you pick one ofd here and there, what I call ‘resident fish.’

> “I centered my entire practice both days looking for areas that had numbers of fish. I really thought I found ’em. The first couple rounds I thought I’d catch a lot more fish than I did.

> “I caught 60-70% smallmouths in practice…reel one in and whole bunch with them. Was just silly. Then the tournament…weighed 1 smallmouth, the very last fish I caught. It’s weird — I don’t really know what changed. The fishing was a little tougher than what I thought it would be.

> “The pools did not fish similarly. There’s only one Black River [runs into pool 7]…just its own animal. It’s full of shad, doesn’t have all the current, just a unique body of water.”

> “I didn’t have a bite til 10:30 the first day of practice. When I started throwing that Berkley Frittside [#5 size, honey shad] it was crazy — I was catching them 2 at a time. That was the main bait for the first 1.5 days of that tournament…all on the first day, half the second day.

> “Then I turned to a shakey head and a topwater…. A Berkley Bottom Hopper worm (gp and other colors) on a 1/8-oz jighead Berkley makes with recessed line tie), and a Berkley J-Walker 100 (bone, stock hooks).

> “…first day always the Frittside, then I’d go to the shakey head as a cleanup bait. The 2nd half of the second day and the knockout round, the topwater got ’em going first and then used the shakey head….

> Crank gear: 7′ MH Bass Pro Cranking Stick, 8.3:1 Johnny Morris Platinum Reel, 12-lb BPS XPS fluoro. Why that fast a reel: “I was getting them to react — and I was moving pretty fast, plus the current — I thought I needed to take up some slack. I just wanted efficiency.” 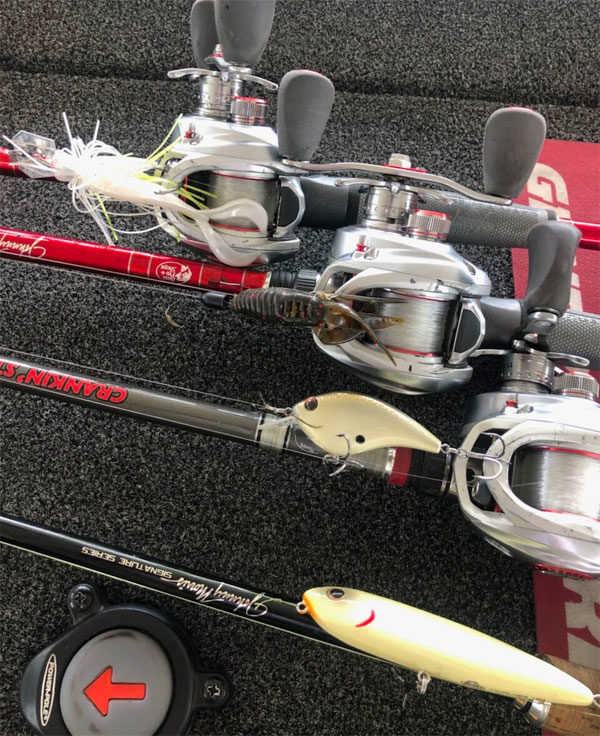 > “I’m the only guy in the field who had the new [Lowrance] Ghost trolling motor. I was really impressed with how quiet and efficient it was. In practice, all day long I was keeping it wide open and it had as much power at the end of the day as at the beginning, even in current….

> “I had the update on my Navionics map and it was really good for the river. I was amazed how well it showed everything.”