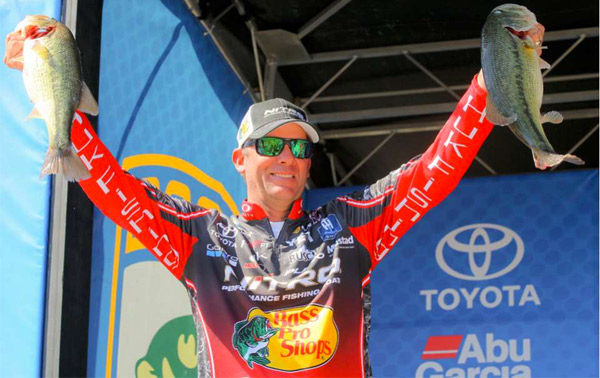 “The man” won another one! This time Kevin VanDam won the Bassmaster Elite Series tournament on Grand Lake, OK doing nothing too spectacular…except catching 5 lbs more than everyone else in a surprisingly otherwise-tight tourney, and setting the all-time B.A.S.S. record for wins.

> “I had a decent practice, but I knew it would take a lot of weight based on the time of year and how the conditions were setting up. I was getting a couple big bites a day but it was hard to predict where they’d come from. I knew I’d get plenty of bites from 3-lbers, but I didn’t know if get 5- or 6-lbers.

> “Once they really started the tournament and focusing on the spots I had them patterned on, after the first day I knew I’d be pretty good.”

> “The bass were basically staging to spawn. That water was in the low-mid 50s. It’s been cool across this section of the country — it should be a full-on spawn by mid-April, but the bass hadn’t spawned yet. But the moon was coming, and with that warm trend I knew they’d be coming.

> “I was looking for little staging spots where the fish would hold before moving back in the pockets to go to the beds. Rock transitions, bottom-composition transitions, some depth irregularity along the bank…. The majority of my bites came in 5-7′.

> “The Lakemaster map of [Grand] is so exact…I pretty much could call my shots.

> “I think a lot of the guys were focusing on the docks, where I was focusing on the bottom of the lake…where 2 different types of rock come together, and a lot of that happens where you have a contour change — where the channel swings against the bank, where it meets a flat.

> “I had [small] stretches that I’d really focus on, like 10 or maybe 50 yards. That lake has a lot of no-wake zones, so sometimes I’d idle back in a creek a quarter-mile just to fish [a small spot]. Then I’d leave, where a lot of guys just fished through everything. I’d key on the best areas.

> “With side imaging and that, it’s very easy to see too. You can see the change in the rocks.

> “Plus I’d spent a lot of time there — the 2 Classics I’ve fished there I was looking for the same things. That helped narrow the process.” 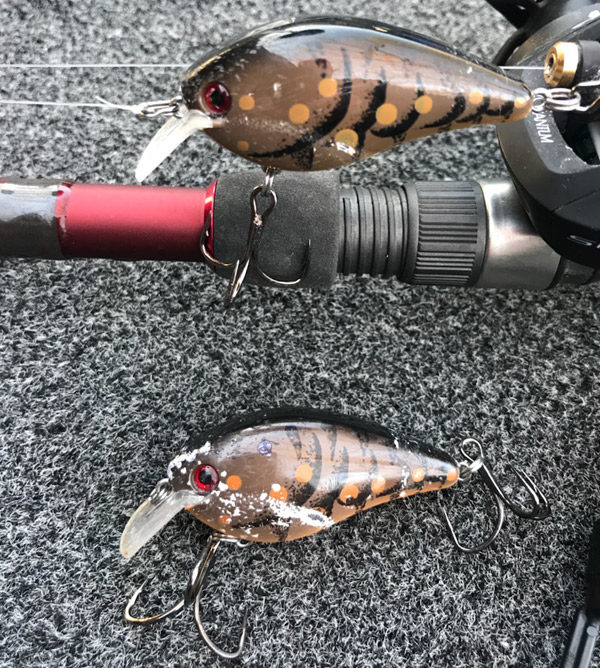 > He cranked straight-up, “just making sure to hit the rocks.”

> Why the brown craw color: “The water had some color, at most 2′ visibility, and the rocks had dark brown moss on them. The crawdads are going to blend in with the color of the bottom, so [brown craw] matches the rocks which matches the crawdads. 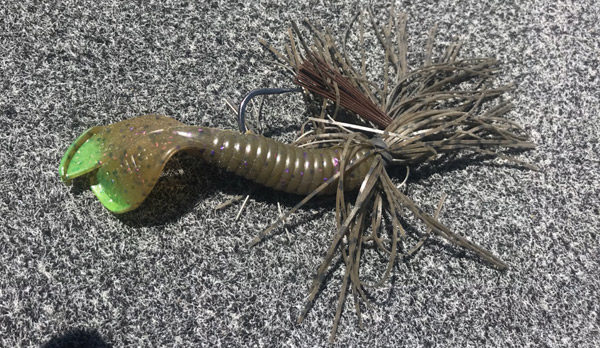 > “The other bait was a 1/2-oz Denny Brauer Structure Jig with a Rage Menace [both gp]. Basically I fished the jig where there were docks or cables over the rocks. That jig skips exceptionally well.”

> “The two most important things for me were the Humminbird Mega Imaging and Lakemaster mapping, and the Mustad trebles. There’s been millions of dollars won on that hook. It’s a hook I designed, and I don’t think there’s a better crankbait hook out there.

> “I never once caught 2 back to back or anything like that, just individual fish. But on some of those same rocks transitions I’d catch one every day.

> “When the conditions were dead calm and slick, I used Finesse and Crawfish on Gravel [sounds], and the Power Pattern when it livened up. The biggest thing is when the water got warmer the last 2 days in afternoons, when I’d come into an area I’d all of a sudden see the shad start popping. The shad definitely get active when they hear the Hydrowave. It’s very noticeable.