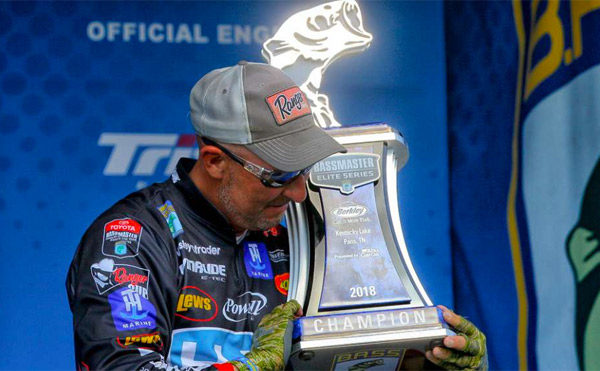 Three whole derbies into his Elite Series career, Wesley Strader won one. Not too dang bad! Here’s how he did it — which seems a little complicated because it changed for him every day.

> “The first day I started out in a cove on a shad-spawn deal and it wasn’t very productive. So then I switched and fished main-lake docks.

> “On the docks were main-lake spawners — fish that don’t go to the coves. I could tell they were spawning…I caught a 6 and a 3 off one dock in the same spot.”

> Also flipped a Texas-rigged 6″ Big Bite Baits Trick Stick (gp) with a 5/0 Trokar TK130 hook and 1/8-oz Reins Sinker, and culled out 3 later in the day on a SPRO Popping Frog (midnight walker) on 50-lb Gamma Torque braid. “It was a late-afternoon bite on that frog — trees and bushes in pockets.” (Also caught one on it day 3.)

> First he flipped main lake docks, then went to the pockets with the crankbait.

> “I fished the shad spawn in pockets. They were spawning around rocks — it was weird. They didn’t really spawn around trees, it had to be rock-oriented.”

> “I fished pocket docks — I never went to the main channel docks again after day 1.

> “The fish [bass] were underneath the walkways on day 3, not out on the floats. I was casting the crankbait under the walkways.

> “I caught one fish on the spinnerbait. I flipped and never had a bite.”

> “I caught a limit on the spinnerbait and buzzbait in the morning, then when the sun got up the flipping bite was back on again. I was flipping brush in areas I’d never made a cast before in my life.

How KVD won the Grand Lake Elite
How Drew Benton won the Travis Bassmaster Elite
To Top
We use cookies to ensure that we give you the best experience on our website. If you continue to use this site we will assume that you are happy with it. Cookie settingsACCEPT
Privacy & Cookies Policy