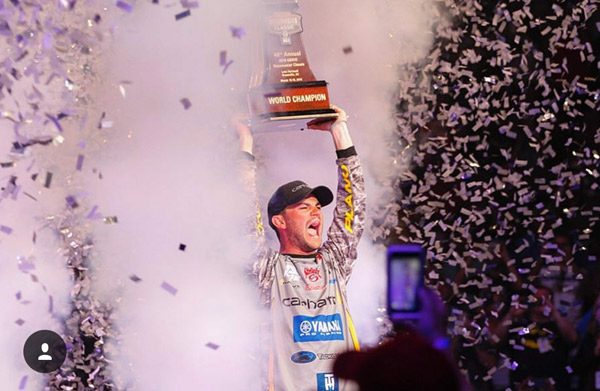 With conditions and water levels changing every day, Jordan Lee fished different ways all 3 days of the Bassmaster Classic on Lake Hartwell, SC. Here’s what he did to win:

> “I had a couple different spotted bass places I weighed fish off. The best spot was a saddle between 2 islands, like a big hole. I found it on Google Earth before the tournament started. It caught my eye as a place spots would be spawning or as a bait spot. I caught stripers there so bait was there.

> “I was sitting in 35′ casting between and island and the bank. It was about 10′ on top…. Just a perfect little feeding spot. I weighed in a largemouth there the first day, but the rest were spotted bass. Caught a 3, some 2.5s, some solid fish there…was a key place for me, where I could pull up in the mornings and get some solid fish off it.”

> “I also threw a deep-diving jerkbait (bone)…. I’m not a great jerkbait fisherman, but that’s a bait I have confidence in for spotted bass. They bite it.”

> “Another spot the jerkbait played was on the second day — a road bed I just caught 1 fish off in practice. I saw it on Google Earth, and it looked like a place spots would get on.

> “…lot of fish there…. It was cloudy and rainy that morning, perfect for that bite. I had a slower day weight-wise…all spotted bass [weighed] that day.

> “I tried to do the dock deal [shallow for largemouths], ran new water, tried to figure it out, but it wasn’t happening. Just never could get a largemouth bite.”

> “That dock bite was what I wanted to do going into the tournament. The first day I caught the 6-lber.

> “The water was clear down at the dam. That’s where I was fishing. My theory was the water was so clear down there, with those bright sunny days and the water warming up, those fish didn’t have anything else to get around — they wanted to be sunning around those docks, trying to move up.

> “They weren’t on every dock — or any docks at all — but that’s where they wanted to go. I didn’t get any in practice…fished so many docks in pockets…the water was warming up, but I just wasn’t getting any bites. The first day I had a couple quality bites [doing it], and I keyed on it for the last day.

> “Soon as I got in there, wasn’t 10 minutes and I caught a 4-lber. …confidence way up. Just after that I caught another one. I started seeing fish under the docks. I found the right spot. They were all in there, multiple fish on the docks. I hadn’t seen a fish all week suspended — [now] under every dock were multiple fish. I saw them swimming down the banks, swimming to my boat.

> “I pulled into the right pocket. The water was 57 in there, the warmest I’d seen it on the whole lake. You could see 7′ down — the fish had to be around that shade. 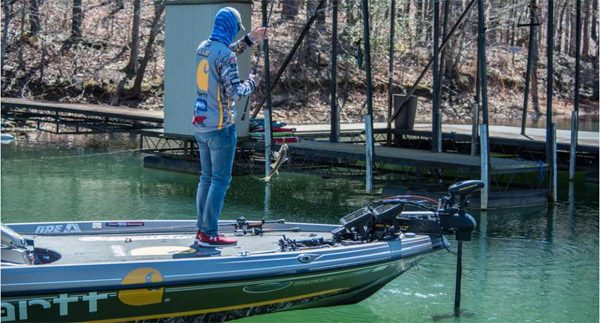 > “I fished a lot of docks without getting bit. When I got around them, they were biting.”

> “I wasn’t really skipping it. I was pitching toward the edges — the water was so clear, they’d swim out. You didn’t really have to set it right on them.

> “I didn’t lose a fish all week — didn’t break one off. I like throwing lighter line, especially in that clear water. Not to lose one or break one off was definitely important.”

> “I did tun on the HydroWave at those spotted bass places early in the morning. I had it on the blueback mode, and I felt like it might have kept them feeding for a little bit longer. They were aggressive and the bait was streaking around. I really think it helped to get another bite or two.

> “On my Lowrance I had a different trail for every day so I could see the places I’d fished earlier in the week [and] try to decide if I’d go back. It really made a difference because I was running a lot of different water…. I eliminated so much stuff doing that. It led me to the right place.”

ALL the Hartwell Classic baits and patterns!
How KVD won the Grand Lake Elite
To Top
We use cookies to ensure that we give you the best experience on our website. If you continue to use this site we will assume that you are happy with it. Cookie settingsACCEPT
Privacy & Cookies Policy