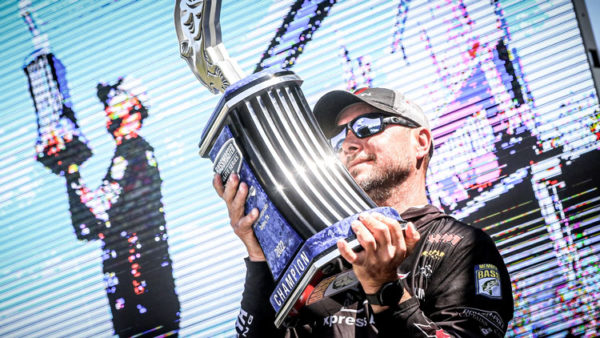 He just went fishin’! He’s the hottest fisherman on the planet so that’s all he needed to do…😁 Okay, here’s the deets from the man himself:

> “When practice started the lake was low, winter pool for the most part. I had a couple-3 tournaments I fished there that time of year, and I tend to fish the mouth of the Hiwassee and up the Hiwassee. That was the beginning gameplan as far as where I’d spend my time.

> “The 1st day of practice there I had a lot of bites and some good bites. The key was I didn’t see a lot of people.

> “The 2nd day I spent another day in there, just kind of looking around a little more. I found a little hidey hole that had a lot of fish in it. I was hoping no one else would find it.

> “After that day I pretty much had my gameplan done. Honestly I almost didn’t practice the 3rd day. But I went down the lake the 3rd day…really didn’t catch a lot.

> “So my gameplan was I going to fish around the mouth of the river and then a pretty good ways up it.”

> “The 1st day of the tournament everything went as scheduled, I just never had the opportunity at a big one. Both days of practice there I had a couple-3 of those 4-5 lb bites, but I never had that the 1st day.

> “The 2nd day was the total opposite…every fish I caught was 3.5 to 4.5 lbs. We got a little more wind that day…. I had a few areas up the Hiwassee and never saw a boat, so I started thinking I might be able to manage those areas.

> “The first 2 days I caught most of my fish off docks and off isolated stumps [with the spinnerbait and jig]…I never caught one deeper than 12”. A lot of the targets up there are pretty shallow. …pretty much the same rotation [each day].

> “The 3rd day everything changed and I don’t know why. I could not get a bite off a dock, and my isolated stuff – I don’t now if caught most of them, but everything started transitioning over to rock.

> “The water cleared up a little and all my bites started coming on stretches of bank with rock on it or a little deeper water, almost like a few spawners moved up. Instead of getting bit off the docks, I was getting bit between the docks on rock.

> “I caught a big one early and caught a 6-lber on my last stop and almost my last cast. That fish did a lot of things – it gave me the weight to be in contention on the last day, and also gave me a lot of confidence on day 4 to be able to run some new water on shallow rock….

> “Day 4…a lot of those things were going on in my mind. Whenever you have those really cold days, typically right out of the gate they bite, then it’s going to get tough…slick calm. Then there’s a little bit of a bite in the afternoon. So I knew that my decision where to start was gonna be crucial. 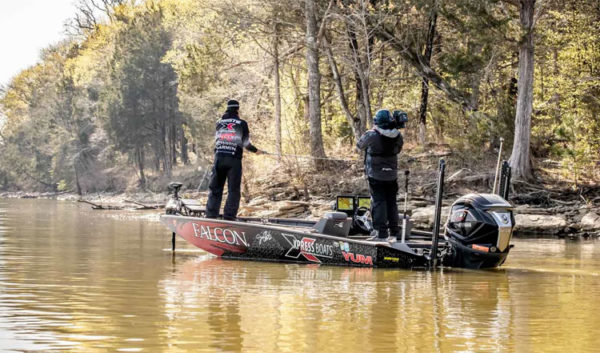 > “I was running – where do I start, what hasn’t been fished the most. I had 3-4 different ideas, then I hit a [serious] fog bank and it really made my decision for me. Rather than starting on the place I really wanted to, I’ll just start here, fish 30-45 minutes and wait for this fog to lift.

> “I started on a stretch of [creek] bank I hadn’t even fished but it was perfect. The water temperature had dropped 7-8 degrees. It had rock, isolated docks and was 200-300 yards long. I got a few bites, caught a couple keepers and ended up spending 2-2.5 hours in there fishing some of the key stretches.

> “It was just a tougher fishing day. I still caught a good amount of fish, but all were pretty much the same size – 2-2.25 lb males. When I pulled up my trolling motor I really had zero hope of winning. Who thought 15-12 on Chickamauga the last day…no matter what the conditions are, someone will catch a 5 or 7. I was just fortunate everyone in the top 10 had pretty tough day.”

> 1/2-oz bladed jig (shad), same rod/reel/line as the spinnerbait. Used on days 3-4 when the water cleared up. 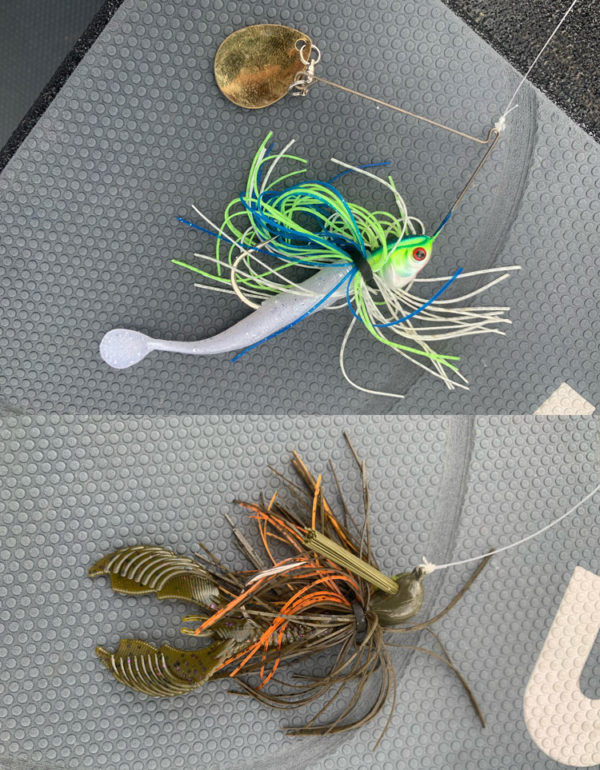 > “It played 2 ways. One was I was running a lot of skinny water. On the [Garmin] mapping we have the option to set the lake level. So when I got to Chickamauga, I put in negative 3…shifts the mapping. So I was able to find those little depressions and stuff in the creeks, where the water was a little deeper and the fish felt a little safer to spawn.

> “My little hidey hole was isolated stumps. In practice I could see ’em…the lake came up, the wind got stronger and I couldn’t see the stumps. I had to use LiveScope some the first day and a lot the 2nd day to see the stumps.”

> “One thing I failed to mention on stage was I caught lot of my fish this week going down ugly do-nothing banks. I wear Costa Tuna Alley blue mirror glasses, and I caught several fish this week…I would see something dark. Sometimes it would be an isolated rock in a foot or 18″ of water, a log, a dark spot – I caught a lot of fish last week just off those things that you wouldn’t be able to see without glasses.”