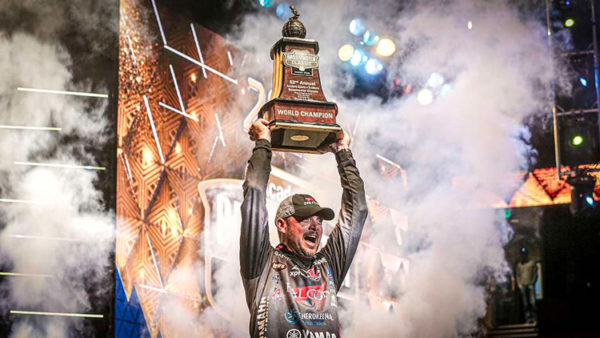 Before gettin’ into how Jason did this, check this:

– He’s finished in the top 7 at those Classics 4 times, including this win.

So is this “redemption” or inevitable? I’m goin’ with the latter. Here’s how his win went down:

> “All I knew is I didn’t want to do the same things I’d done in the past. …practice I would get around some of that dirty water and start running the same things, and every time I’d get around it I’d start seeing a lot of boats – our guys, locals. There was a lot less traffic in the clearer stuff.

> “Even before practice started, I was thinking – I’ve had a lot of success here over the years fishing dirty water, but I know these guys watch the shows and see the articles and stuff…. I didn’t feel like it’d go down in the dirty water.

> “The 1st day of practice I had a really big bag fishing the clear water, and that kind of – I wasn’t dialed in but it reaffirmed it. I really didn’t fish a lot of real dirty stuff til the 2nd day – I ran to an area I fished a little bit in 2011, I pulled a spinnerbait out of the box and I cathc a 6-lber.

> “Most times you’re like, Oh cool, here we go, this is the comfort zone. I just didn’t feel it. I made 5-6 casts after that fish and was like, ‘This is not going to happen. This fish is trying to lure you in.’ So I put the spinnerbait back in the box and went back to the clear water.

> “There wasn’t enough dirty water to go around, and some areas were 4-5 miles apart…and maybe 2-3 boats would be in there [after making that run]. It just wasn’t gonna go down that way was my gut feeling. Luckily I put that spinnerbait up. If I made another cast with it and caught a 5-lber, I probably don’t win the event.”

> “…boat 5 – I had a drain that was a mile from takeoff. I knew I was going to catch some fish in the drain but didn’t know how big they were. I felt like I needed to get off to a quick start as far as catching fish, to get in the groove. And I knew my dock pattern was better in the afternoon than the morning.

> “I start in there and luckily I catch a big one. I caught a lot in there, then ran the dock pattern the rest of the day. It was really the same thing each day.

> “I learned more and more about that ditch each day. The 2nd day I weighed 3 of my 5 from the same cast in that ditch. And I saw a lot more – I was super fired up to go there the 3rd day because I knew where they live, where they feed and how they set up.

> “The 3rd day was crazy – I catch one right when I get to that cast, and I get on LiveScope and they’re gone. I went from seeing 200-300 fish swimming around to 10, and the bad part is they were singles. They’re really hard to catch when they’re singles – there’s no competitiveness between them.

> “I don’t know if they pulled water the night before because leaves and sticks were floating in the center of these drains and it hadn’t been that way. …still bait, just not the amount….

> “I ran as many docks as I possibly could the rest of the afternoon. It was really hard fishing. I’d go an hour or hour and a half without a bite, then hit a couple docks and catch 2-3 fish. I’m not sure if the fish just moved up or I hit a stretch that hadn’t been fished that day…make as many high-percentage flips as I could.”

The ditch, the docks and the baits

> “The ditch was deep. I’d start fishing in about 35 and most of the big ones came between 30′ and 35′. It had a pretty long and slow taper. You would go 50 yards and it would change 2′. This ditch had 2 channel swings in it, and that’s where the bulk of them would set up. The straightaway was their feeding zone.

> “Really it just looked like the other 5,000 ditches on the lake. What set it apart is it was loaded with bait.

> “…these fish would just get up there and feed. If I didn’t see one on LiveScope, I would just cast to a dock and caught several doing that.

> “When I cast it [to a fish on LiveScope] I didn’t want to put it on their level. If a fish was in 30′, I wanted it to come across 3-4′ above it to make it react. Every fish is different – some were in 20′ and would meet the bait halfway [down]. Some I had to make 2 casts to because the 1st cast didn’t trigger them. Those fish see a lot of baits, and that time of year they’re not really crazy about eating.

> “Even seeing them on LiveScope and being super quiet, I only caught 1 out of 5 or 10.

> “The bait is a prototype YUM Forward Facing Sonar Minnow…been working on it for a while. It all boils down to LiveScope. …in the beginning [of Live sonar] you’d have 5-6 rods up there. If a fish is in 6′, you’d grab a Rogue. If it’s in 20, you’d have to throw a swimbait. I just wanted something on the front that would reach all of those fish. It seems like when you see one [on LiveScope] you only have so much time to catch it. 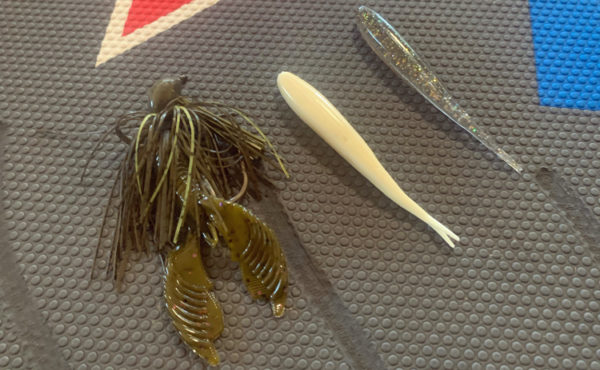 Why he fished a jig when almost no one else did:

> “I tried doing the wacky worm thing…thought about all these other guys doing the same thing…I wanted something different and a jig is high-percentage.

> “The 1st day of practice they were everywhere [on docks], but as the tournament went on they really got positioned on the back side. Over cables, behind docks…not real comfotable throwing something back there [light].

> “I wasn’t seeing them [even with electronics], I was just fishing. I did [LiveScope docks] in practice, but those fish moved to the back. It was all about going fast. The last day I was running and going crazy. I’d pull up to a dock, put the trolling motor down, make 2-3 flips, pull up the trolling motor and hit the next dock.

> “…as shallow as possible…could see bottom…the shallower, the better. If there was wind on it, even better. The 3rd day it didn’t matter if it was in a pocket or on a point, it just needed to be shallow.

> “Every day was different…2nd day I caught them swimming it, the 3rd day all of them were on the bottom.”

> [Why he chose the War Eagle Jiu Jitsu Jig:] “It’s the head, the hook, the colors. 5/8 is a big jig to be fishing in a foot of water, but with the water that clear I didn’t want it to fall slow so they’d get a good look at it. I wanted a reaction.

> “Most fish were sitting under the foam [dock float] so I’d put it right next to it – right in their face.

> “Garmin played a huge role in 2 ways. One is LiveScope – you can’t catch those fish out there that way unless you have it. But maybe a bigger role…ran outta docks early the 2nd day. The docks are labeled on the mapping, and I needed a dock sitting on a high spot. I was able to look at the mapping to put those 2 variables together – a dock on a high spot or shallower than the rest of them. I could run to it and get bit.”

> “Bass fishing is not a solo sport, it’s a team sport. Without all of the sponsors…they all play a huge role in the event, and I’m fortunate enough in my career that I can use what I want to use. They have as much of role in this win as I do.”

How Alton Jones Jr won his first Bass Pro Tour event on Fork
ALL the baits from the 2022 Hartwell Classic!