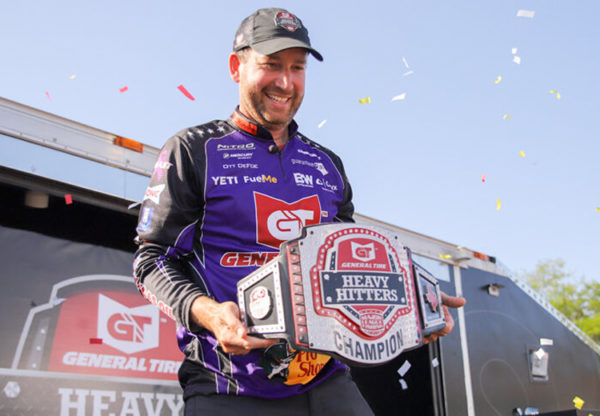 If there’s a Major League Fishing tourney in TX around Easter weekend next year, bet on Ott – because that’s 2 years, 2 wins in a row for him. Here’s how he did it this time:

> “I’d never been to Palestine before. I didn’t go last year on the pre-fish – I just don’t pre-practice. I’d never seen it before, but it’s not far form Fork and it’s really close to Athens, so I felt like it’d be similar…terrain-wise.

> “…when we were at Fork, we weren’t too far removed from [last week time-wise]. …actually on my final day at Fork [in Feb], I saw some fry. Knowing that was 2 months ago, I kind of felt like in the extreme shallow ends on the lakes there, a lot of those fish had spawned. I felt like Palestine set up similar…maybe still some fish spawning, but the big wave of bigger fish probably went. But the deeper, cooler end was probably further behind.

> “Then we had the conditions coming – good warm weather, a full moon. So it could set up for being a prime week for that section of the lake [mid to lower].

> “…practice was a trying feat because it was so windy. The 1st day was incredibly windy – 20-30 and higher gusts…extremely high winds, which made just getting around hard. And looking was hard – I did get in a few areas that were really protected and saw some.

> “The 2nd day I found one little pocket that was well-protected, with a little bullrush in it…found 6-8 fish in a pretty small area I felt like were scoreable. That same creek that morning was a little bit of shad-spawn bite. So it kind of gave me a place to go….”

> “I started in that creek the next morning, on the shad-spawn deal. I was in group A…Saturday and there was a high school tournament that had 250 boats in it out there with us. So the particular spot I wanted to start on, 2 high-schoolers were on it already. I waited on them to move off of it, then went there and caught 5-6 and a scoreable [2-lb minimum].

> “I ended up catching at least 15-20 fish and 1 more scoreable on the shad-spawn deal…went to the spawning deal right at the end of the period. Right as the period started, I broke it off [a spawning fish] and 2 pitches later I caught it – on a Tokyo Rig.

> “That was the start of that pocket where I knew several were. I didn’t leave that 100-yard stretch until about the last hour hour and a half of the day. I ended up going to little canal-type stuff close by, and caught my last 2 there that day. That ended up being really good the next day as well as the final day. That’s where [Alton] Jr caught the 8-lber and the 6 – we were sharing that water.

> “The 2nd day I fished the same water. [First the] shad-spawn deal – the shad were going crazy, even more than the 1st day. I caught 1 striper and 3-4 non-scoreable bass. So after an hour, hour-15 I had nothing to show for it.”

He hit the spawning fish again, won the group and got to go straight to the Championship Round where the minimum size went up to 3 lbs.

> “The 2nd day I didn’t catch any shad-spawn fish that were scoreable, so I had that indicator, and when I was looking I saw more pairs on beds…more fish were actually spawning. So I felt like there was no reason to spend any time on the shad-spawn deal that morning.

> “I started on [his best] pocket. I fished all the way around it methodically. I couldn’t see them because it was early, but I knew where they were. I had 1 decent bite that I did not catch, and that was it – in a place where I knew there’s a lot of fish. So I was a little flustered at that point. I knew I was around them but they just were not biting.

> “So that was the first time I left that creek…went to the lower end of the lake, to some pockets down there. At the end of that period I was looking at a bed fish that I didn’t know if it would score and a 7-8 lber. That gave me some confidence I was in an area that had ’em.

> “I spent like 30 minutes on them and finally caught the male – it was 2-12. The female wouldn’t do anything. I never could get her to lock down. I went a little ways and caught a 3, then a little further and caught a 5-lber. That put me a few ounces within Dustin at that point, who was leading.

> “I was in good area and seeing lot more fish, but I milled around there a while longer and couldn’t get anything else to happen. So finally at like 90 minutes to go, I started heading back to where I started [the day, that creek again]. I made a couple stops here and there – nothing.

> “I knew I was always in it. When I caught that 5-lber in the 2nd period, I felt like I’d have a legit shot at it, but not catching any the 1st period – it’s hard to go a period without catching one and still win.”

For the bed fish he had 2 setups. He caught most of them on a worm:

> “Sometimes I used the Tokyo Rig strictly as an aggravation tool. I’d get them super mad with that…if I felt like I could catch them on the worm.” 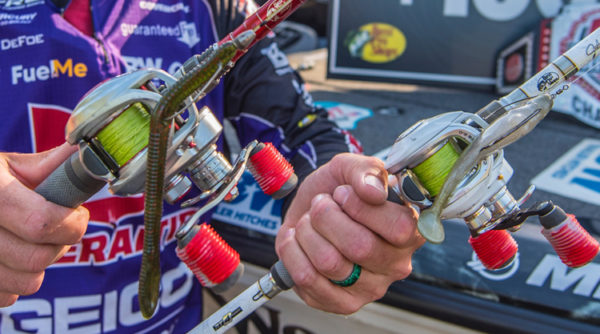 > “We were fishing in their boats, so I actually took the front [screen] off the boat the last day so I didn’t even have to step over it. So nothing was in my way.”

> “Definitely sunglasses. Seeing those fish was the single biggest key in catching them. They were hard to see this week, that’s for sure…dirty water….