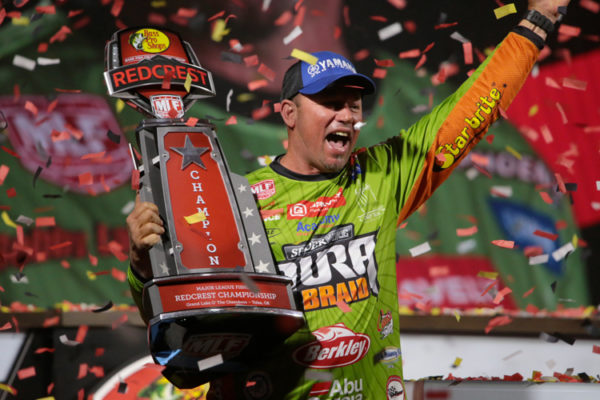 Wow what an ending to this deal! Near the end Luke Clausen needed a 4 to take the lead, and 4s weren’t exactly common – and he got a 4+. And then in what seemed like the last minute Bobby needed any legal fish to overtake Luke, he caught one that looked like a 2+ but it weighed 1-15, 1-15 on the 1st reweigh and then 2-01 falling to 2-00 on the final reweigh. A couple seconds left, done. Drama in a good way!

Here’s how Bobby did it:

> “Going in my hopes weren’t real high. Me and my son [drove there together] – I was trying to psych myself up. I’d had a pretty rough year. I had a good practice at Smith and a decent one at Lake Fork, and bombed both of them. …Pro Circuit…squeaked into getting a check.

> “So when people say ‘momentum,’ I used to believe in that a lot but I’m starting to believe that whenever it’s your time, it’s your time. God is  in control of everything we do whether you realize that or not….

> “So we get some money to show up, so let’s go and have some fun. That was kind of my mindset, but I wanted to get out there and practice hard….

> “I saw the weather coming and was like, Good Lord I can’t stop putting these frogg togg bibs on…. We’d fished some brutal conditions this year…maybe that was part of my test [to be] mentally and physically prepared for the conditions.”

> “I went to the back of Drowning Creek, to the exact wall where I won the tournament, caught a 2.5 and 3.5 and really liked what I saw. …dropped 3′ to 7′, nice rock, some transition banks. I marked about 7 spots there, then went to Honey Creek…caught 4 on 4 casts behind the docks at a big marina there.

> “The 2nd day of practice we had big winds and rain. I ran all the way to Duck Creek, went all the way in the back and found them pretty good in there. Then I went to Horse Creek and caught two 5s and a 4. I was starting to feel really good about my practice…a shot to get in that top 10.

> “I realized I didn’t need to be doing a whole lot but throwing that Frittside.”

> “The 1st day…started on the rock wall Duck Creek. Little did I know [a bunch of guys where there too]. I was like, Wow this won’t work very long. I caught a 2-07 right off the bat and…lost a 3-lber…turned really muddy.

> “I caught that 1st fish on chart/black. The water was so dirty back there…spinnerbait didn’t work.

> “…Honey Creek, back of the docks, never caught one. With 2 hours to go I ventured up the Elk. There’s a few pockets up there, and I caught three 3-lbers up there…believe I was in 8th place. I burned 35 gallons of gas, and felt real good about what I was doing. I didn’t hit anything hard. I’d make one pass and leave.

> “The 2nd day I completely wrote off Duck Creek because it was dirty, so I started off in Drowning. I didn’t catch one. A the holler I caught two but they weren’t big – but I had 31 lbs and thought I would make the Knockout Round.

> “I ran up into the Elk…realized the water was really dirty…caught a 3-lber.

> “I fished the chart/black Frittside and ‘HD brown craw’ depending on the water color.”

> “With the water coming up I already completely wrote off Duck and also wrote off taking a right out of Wolf Creek. I had to put myself in the creeks where the water was cleanest, fish everything I could and make every cast count.

> “It was really coming down to Horse Creek, Drowning Creek and the little holler I had between those two. I had a nice little milk run. If the wind wasn’t blowing hard it was a 10-12 minute boat ride.

> “I started in the little holler…2 little dips ran from 3-8′. I ended up catching one right on the bank, off a big piece of chunk rock. That got me started.

> “I ventured to Horse Creek…wanted to see the what water looked like. With the water coming up it doesn’t affect the turns inside bluff walls as much: If the water come up 2′ on a bluff wall, the fish just move up on the rocks. I caught a 4+ and a 3+ – that gave me 3 fish…had me in really good shape. That was toward the end of 2nd period.

> “…started 3rd period I went straight across to where I caught a 4-lber first day. I threw across the point and caught a 2-09, then a 3-07 and man I felt good about it. I was on cruise control after that…fished a bunch of new water.

> “Drowning Creek was gonna be my go-to spot. The water had gotten up to 52 degrees…weather wasn’t going to be as cold that night. The wind [forecast] deterred me from going to Horse Creek, so for the final day I was going to put all my eggs in the Drowning Creek basket.”

> “I started in the back of Drowning Creek, further back…little bluff wall and caught a 3-03 right off the bat. I went down my magical stretch and didn’t get a bite. …4-5 locals were back there, really pounding on a lotta stuff.

> “I ventured further back in the pocket…went through a little horseshoe back there that dropped off into about 2.5’…came to laydown tree on the corner…flipped a jig on it and caught almost a 3-lber….

> “…flipped into tree, caught a 3.5-lber and hooked a 4-lber off the tree…went to boat-flip it and it came off. I thought that was the fish that was going to [lose it] it for me.

> “I went to the next dock and caught a 2.5-lber off it, in about 2′ of water. I thought, If they’re on docks I have to try this other dock. I was going to fish this dock with brush behind it, but instead went all the way to the back and fished docks back there with no luck.

> “A log was laying there that had water on it now. I flipped to it and caught a 3-11 or 3-12, and the wheels started spinning then: Golly the fish are shallow – I caught the last few in 2′ or less.

> “A dock was there and I pitched behind it – I hung a 6-03 between 2 cross-members. Somehow the fish swam under the boat…swam back under the dock. I had the line and lifted that fish in the boat – all of a sudden that bumped me into 4th place. I’d caught 10 lbs in 3 minutes.

> “Now I was starting to feel it. I knew what I needed to do, where the fish had migrated to. It was just a matter of time to catch ’em.

> “…little drain in the back dropped off in about a foot of water – I flipped a little jig into a tree, and it sunk about 2.5′. I thought, One has to be in here. A little further back I caught a 3-lber. I was right around 4th place.

> “…little laydown in 2′, I pitched to the front, then pitched to the back and caught a 2-10. That moved me to within 6 oz of the lead. I lived this story so many times, being so close but so far away.”

Then he caught the last one behind a dock and that was all she wrote:

> “It was mind-blowing. I’ve watched it 100 times – my reaction on camera was exactly what I felt at the moment. I was breathing hard, my head was spinning – I felt like I was going to pass out. My tears were tears of joy.”

> Why a brown bait in dirty water: “Drowning Creek – in the back there must be a spring [because it] remained clear during the event. So all the water coming out of the back was clean and clear. All the way to the front of Drowning it was absolutely beautiful. Same with Horse Creek – the more toward the front, the prettier the water was….

> “…what I call ‘little buddys’. [On the trip to Redcrest] my son and I saw dogwoods starting to bloom, and…anywhere I go, especially up this way, if I see any kid of little buddys on the trees I immediately start looking at the weather. I know sometime in the last couple weeks it was warm enough to get those fish to start migrating. It meant…shallow cranking will be big in this tournament.”

> How he could cast a light crankbait accurately in the wind on day 4: “With that longer rod and those Abu reels you can whip that rod in any direction, and that Frittside weight system in there – into the wind, against the wind, it doesn’t matter.” 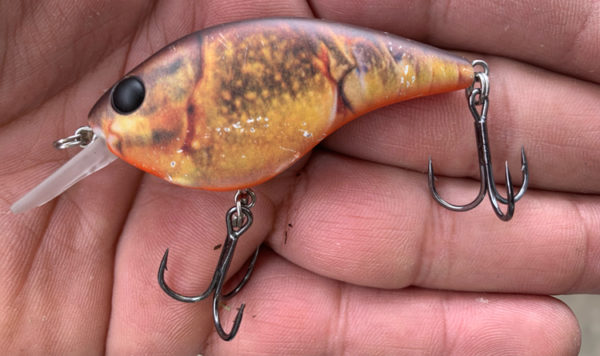 > “[Lowrance] Active Target did come into use a little bit. Some of those transition points in the back of the creeks, I could see the brushpile, log or laydown under the water with it. It made it easier for me to cast the Frittside to the left or right knowing I would bring it through some of the structure. So it was a key factor in some of the bites.”

> Every single one of my sponsors [he listed ’em all!]. I want to thank every one of those sponsors for believing in me, for sticking with me the past 15 years, having hope and faith this would come one day. Sunday was the day.

> “Above all of that, God and my entire family.”