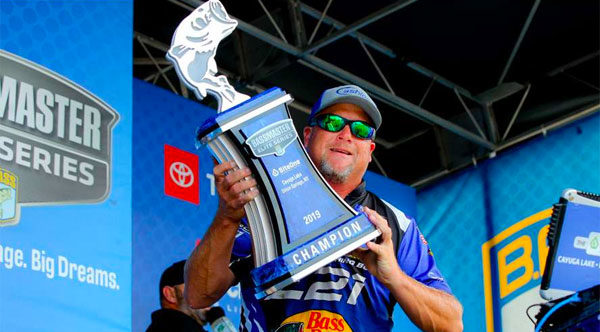 Jamie Hartman got his 2nd blue trophy this year last weekend, at the Cayuga, NY Bassmaster Elite. Jamie lives in AR now but is originally from NY and knows those waters. Here’s how he caught ’em:

> “I went into practice thinking…positive thoughts. I’d fished there before, and I kind of knew what to look for. Trying to find it…was a different lake with the spring conditions. It really jacked that lake up…made it difficult to find the good grass.

> “NY had very cold spring, a very long winter and high water. The water stayed cold for so long, the milfoil and coontail weren’t able to grow and they’re so crucial for that lake. It was just a bunch of string grass — terrible stuff. It’s real hard to fish, and fish don’t group up in it.

> “Once it finally gets warm, that [string grass] starts dying down and the milfoil and coontail take over. [Because of the winter and spring], a lot of lakes don’t have good milfoil growth. That’s why I spent 2 months up there messing around on other local lakes.”

> “The first morning of practice was my best. I found fish [mid-lake] and the right grass immediately. It was easy to catch them so I had high hopes. But from there, it just got tougher.

> “I tried to expand but it was hard to find more stuff. I found a little deal in the north end of the lake, a backup spot, and thank goodness I found it.”

He went to the mid-lake spot he found on the 1st day of practice:

> “A bunch of guys day 1 ended up coming in and out of there, but they weren’t fishing it completely the same way I was.

> “…barely any contour…drop went from 10-13’…some pretty decent grass coming out. As it dropped into the 13′ mark where I stayed, it had mostly coontail and then just tapered out — went out to 17′ with about 2′ of grass off the bottom. That just seemed to hold them.

> “…had the right recipe and everything…really disappointed me they weren’t there. I caught fish, but not the quality. Nowhere near what I had seen and hoped for. I don’t know what happened.

> “But things happen for a reason, and there was a reason I wasn’t catching them there. I had to go find better fish.

> “My starting area fell apart, so I left there with 14.5 lbs and went up north [to his backup spot]. I caught a 4.5 right away in the grass I found, and I spent most of the last 3 days there, picking it apart.”

He mostly cranked the first spot — a Chatterbait worked in practice but not on day 1:

> “…2 different cranks for 2 different depths [ticking the tops of the grass]: a Strike King Series 5 (sexy shad) and an old-school Bomber Fat Free Shad (not sure color is made anymore).”

> “I swapped the hooks with Owner Short Shank Stinger Treble Hooks. Can’t even tell you how crucial that was…never lost a single fish the entire week, and you can’t say that cranking very much. 6.5-lbers just had the back hook and I landed them no problem.” 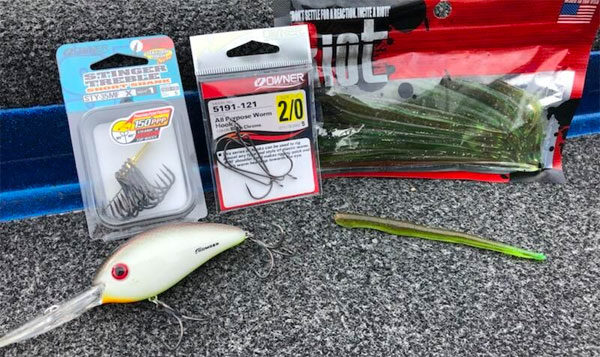 He spent all 3 days in his northern backup spot:

> “It was just a big old flat in 12-13′, not a lot of contour…. When I found it in practice, I was idling over 14-15′ of water — little clumps here and there, then all of a sudden it got a little thicker, then I saw grass that was starting to not mat out but it looks like that on your graph. It gets thicker.

> “It petered out in both directions so I thought, That area should isolate fish. Ultimately it did. I just put my head down and grinded it out with a dropshot and crankbait.

> “…cranked [same baits], then when they stopped biting, dropshotted. Conditions-wise, when it was super-calm you couldn’t catch ’em on a crankbait, so then I picked up a dropshot and picked [the area] apart.

> “That’s how I got several big fish. You couldn’t see ’em — the grass wasn’t high enough so you couldn’t see where you needed to fish. So I was just covering water…aggressively fishing the dropshot. Pitch out, work it a little bit, reel in….

> “It was such a broad area, without contours, so I just had to pick around. It’s just like pitching a big grass bed — same concept. I felt like when I put it in front of one, he was gonna eat it.”

> Dropshot bait: 4.75″ Riot Baits The Synth hand-poured worm (gp neon). He was catching all largemouths so why that color: “…that water color in Cayuga…has this weird cloudy blue color to it. Something about that worm [color] made it glow — it just popped. …3 weeks fishing it in lakes around Cayuga they were just chewing the heck out of it.”

> How he was fishing the Chatterbait: “…let it drop in [into the deep weeds], rip it out, reel it, rip it out again…then as it get closer to the boat I’d slow-roll it.”

> Big key was “patience: It would get really, really tough between bites. I’d go an hour or 2 without a single bite. I just kept my head down and my confidence bait in my hand, and just picked around.”

How Edwin Evers won the BPT Redcrest Championship
How Carl Jocumsen won the Tenkiller Elite
To Top
We use cookies to ensure that we give you the best experience on our website. If you continue to use this site we will assume that you are happy with it. Cookie settingsACCEPT
Privacy & Cookies Policy