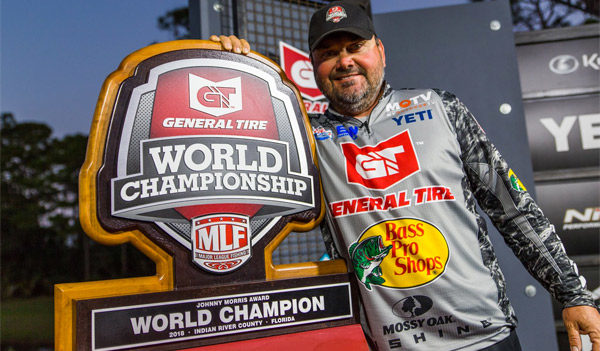 How did Greg Hackney conquer 4 lakes in early spring (March) during mostly tough conditions in FL? Here’s the short version.

> “My 2 deals there were I flipped mats with a Strike King Rodent (black/blue) and a heavy 1.5-oz weight, and I fished a [not yet released] Strike King Thunder Cricket vibrating jig with a Strike King Blade Minnow (both bluegill) in a big grass flat where fish were spawning.”

> “They’d sprayed it. I don’t know which lake I was on but it had no underwater vegetation whatsoever. No eelgrass, no hydrilla, no nothing. It was almost like fishing a reservoir in east AR — nothing but dirt.

> “I ended catching them off willow trees and some type of cane growing on the shoreline. I flipped a 1/2-oz Hack Attack Flipping Jig with a Rage Craw (both black/blue) — I never caught a fish on anything else.

> “The fish were spawning — they just wanted to have something to spawn around. I flipped everything…the willows were growing down the bank and some limbs were in the water.”

> “It’s a cypress tree lake — no grass, no hydrilla. It had some Kissimmee grass, but every fish I caught came off a cypress tree.

> “I caught half of them flipping a Strike King Shim E Stick (b/b) on a 3/16-oz slip sinker around real shallow cypress trees…then later fished deeper [4-5′] cypress with the same bladed jig.”

> “The last round was similar to the first round — it was a typical FL lake: hydrilla and hyacinth but no reeds. It’s a big, open lake.

> “I caught every fish on a Rodent (b/b) with 1.5-oz tungsten weight, flipping hyacinth mats.”

Bad conditions in FL — dirty water, cold fronts — are a killer, worse than in other states. And in the last 2 rounds, the MLFers had to fish in what might have been the worst cold front of the spring: air temps in the mid-40s and 30 mph winds when it had been in the 90s. What Greg said about fishing a championship where he switched lakes in those conditions:

> “Overall it was fairly tough…overall slow except Garcia. I never got in a hurry…never had to get in a hurry. More slow and steady was the deal because fishing wasn’t through the roof.

> “I got behind in the first round, but I didn’t worry about it because it’s FL. The way I was fishing, you could catch an 8-10 lber. I like to go places where they have big ones.”

How Mark Daniels Jr won the Oahe Elite
How Clent Davis won the FLW Cup
To Top
We use cookies to ensure that we give you the best experience on our website. If you continue to use this site we will assume that you are happy with it. Cookie settingsACCEPT
Privacy & Cookies Policy