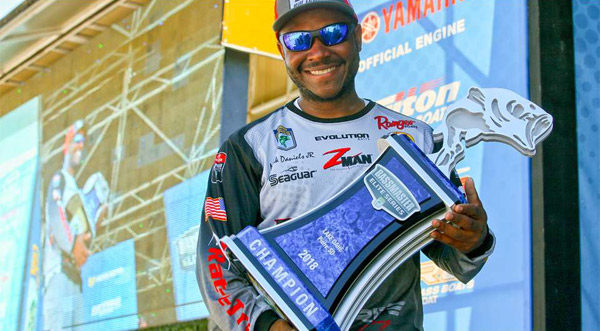 Mark Daniels Jr grew up in CA and lives in AL, so smallmouths aren’t really his sweet spot. And because Lake Oahe, SD is so far away from just about everything — except Canada — he didn’t prefish. But he found bass that more or less stayed put, and figured out how to catch ’em. Here’s how he did it.

> “I didn’t know what to think [about Oahe]. You do any kind of research on the lake and you only find pike and walleye data. There’s very little out there on smallmouth fishing on that lake….

> “I think that alone made the playing field level…a new lake [for the Elites] that didn’t have any kind of information. And it was so far away, almost nobody came to prefish.

> “Everything I discovered was in the 3-day practice period.”

> “I knew the fish should be on the very tail end of the spawn, if not already completely done. I was trying to intersect those fish leaving the spawning grounds. I was looking for big bays or pockets off the main river where they’d spawn, and fish the closest points to those areas.

> “The points weren’t visible — they were underwater points I used my Garmin electronics to find.”

> “[He had a 50-mile one-way run.] When the wind blows in SD…you’re always mindful of that. The first day was the worst day…took a beating getting out there and a heck of a beating getting back. But I had 18 lbs that day

> “The next day the wind blew really hard. We had a [90 minute] delay that morning and I had a 3:00 check-in so I was worried about that. But the wind laid down really beautifully after that.

> “A bunch of guys were fishing [around each other]. Me, Casey Ashley [2nd] and Bradley Roy [6th] were all fishing close to each other.

> “The smallmouth were so nomadic on those areas — they weren’t sitting still. I had to troll around til I found them…scan out there with Panoptix, see 1-2, troll over to them,  and drop or cast to them.

> “For the most part it was visual. I caught a few just fan-casting in the general area I thought they should be. But a lot of them were on 2D or Panoptix….”

> “13-18′ was the magic number for me. These points were surrounded by deep water, 30-40’…scattered boulders and little bit of brush….

> “…some bait out there, smelt, scattered on top of some of these points. But everything I used were crawfish [colors]. I don’t know that it mattered….

> “I used 2 baits the entire tournament. One was a 1/5-oz Z-Man Finesse ShroomZ Jighead with 2 different color 2.75″ Z-Man Finesse TRD worms: gp goby and mudbug. I was dragging it on the bottom, really subtle. If I saw one on the graph, I’d just drop down to it.” Used a 7′ 1″ MH Favorite Sick Stick.

> “I was dropshotting with 2 setups — 1 TX rig, 1 wacky-rigged. When I got around scattered brush, I’d use the TX rig. Around rocks or open water, I’d wacky rig.” Bait on both was a 4″ Z-Man Finesse Wormz (gp).

[No bait pic yet cuz he’s driving, but will have one soon. For now just know that it was small and gp.] 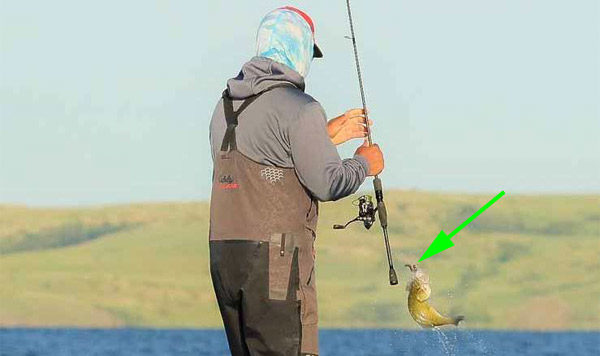 > Wacky dropshot was the same rod as the Ned Rig, TX-rig dropshot was a 7′ 2″ MH Favorite Jack Hammer. Both used 3/8-oz tungsten weights and a #1 dropshot hook.

> “My Garmin electronics were paramount. A lot of the boulders and brush I could see on Panoptix. I wouldn’t have to troll up to it and get right on top of it. As the tournament wore on, the pressure started to get to those fish so I was doing more casting. [Panoptix] out to 60-100′ in front of me…see [structure] then cast.”

> “They weren’t schooled up yet. They were getting ready to get there…not schooled up so it wasn’t like you were making the same cast or dropping straight down and it was bite after bite.

> “I knew I was was around them day 4. That’s all you can ask…put yourself around the right-caliber fish.”

How Ish Monroe won the upper Mississippi Elite
Greg Hackney’s MLF Championship winning baits
To Top
We use cookies to ensure that we give you the best experience on our website. If you continue to use this site we will assume that you are happy with it. Cookie settingsACCEPT
Privacy & Cookies Policy