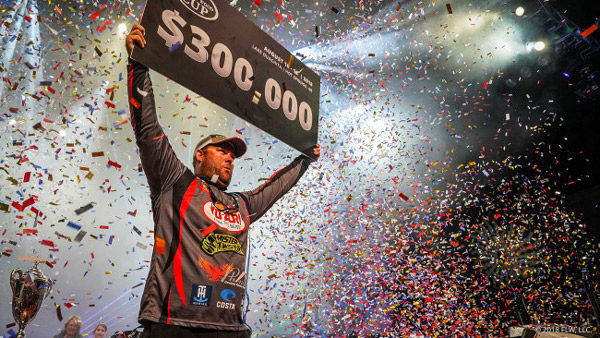 Right now Lake Ouachita has a lot of bait, a lot of structure and a lot of brushpiles. So yep, it also has a bunch of bass, but in dead summer at the FLW Cup, the bigger bites were hard to come by. Still, Clent Davis knew he had to have ’em to win, so that’s how he fished.

> “Pre-practice is when I found the stuff I won on. [He sorted through the 1,038 brushpiles he had marked on that lake!!]

> “I went to that area the first day of practice and caught a pretty good one, then left that whole area alone.”

> “It was no different than the rest of the lake — just a bunch of islands with a bunch of drains running through it. I have no idea why the better largemouth were biting in that area. The bigger bites came early every day.

> “Day 1 right off the bat I jumped one off that was 5 lbs. I thought, Man this is how my Cup starts? But at the same time I thought, They’re biting today — it’s gonna be a good day. But 4 hrs later I was still waiting on my first keeper.

> [Biggest factor in his win:] “It really was the worm, no doubt in my mind. It’s just different. It has a speed tail on it — people think it’s just a giant Speed Worm, but it’s not. Most Speed Worms have fat body…no action but the tail. This worm has a really thin body going down to the tail…the thing absolutely goes crazy falling down through the water column.” 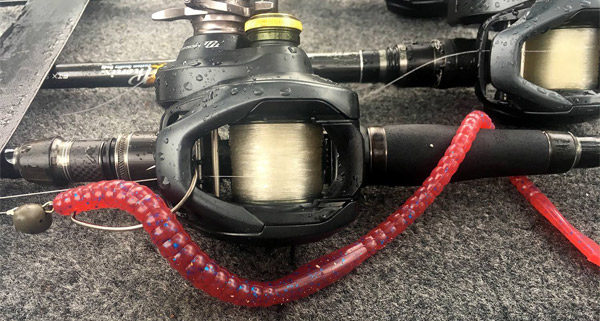 > 12″ Mister Twister Mag Buzz Worm (plum apple). “I’ve been fishing it for 3 years, but they just released it last year. Plum apple is just a confidence color — plump apple and plum are what I throw offshore.”

> “You get way more action with that wobble head than a TX rig, and it comes through the brush way better than a TX rig. With a TX rig, that weight starts pushing on that worm, and if you pull it in that brush you can push the hook out and get it stuck in the brushpile. If you do that, you’ve ruined that spot. I don’t think I got hung up in a brushpile all week. 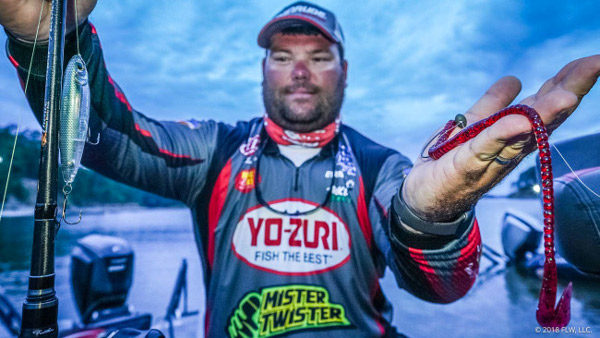 > “The 1st and 2nd days I caught a key fish on a Yo-Zuri 3DR Pencil (gizzard shad). They’d come up schooling over the brush.

> “I have a lot of confidence in it. Brandon Card almost won two Elites on that bait. A lot of guys on both tours are throwing it”

> “My electronics and me being hard-headed.

> “Lowrance has the single best deal in bass fishing if you’re trying to cast to targets — it’s so quick. I use the HDS 12 Carbon, but the whole deal on the brush is the Lowrance Point One antenna. Without that, the internal GPS isn’t fast enough — the [Point One] helps line up on them faster…where the bar is on your unit, where you’re looking at it, you’re actually there. It’s a huge deal. Every cast I made was not a wasted cast.

> “I knew I wasn’t going to get many bites throwing a big worm, but they would be the ones that counted. I’d go hours without a bite. I’d either catch them that way or go home with a check and be happy.”