As we all know, Zona threw this word “slaunch” out there to describe “big bass” and…somehow it fits. If anyone else came up with it, it wouldn’t fit, wouldn’t catch on. But here we are.

Guess it can also be spelled “slawnch.” Or some peeps say “slouch” or “slounch.” Some go with “staunch.” You might have a different interpretation. Just know this: All of them crack Z up.

But back to the beginning: Where the heck did that word come from? Lemme assure you: Every syllable that comes out of Z’s mouth, while it may seem totally off the cuff, bizarrely is not. Or maybe it is, but he can improvise a 5-minute story about it. So here’s the origin of “slaunch:”

> The truth of slaunch is it’s named after a a guy I know. We combined sloth, haunch and slob. Unfortunately this man has passed, but oh did it fit.

See what I mean? More from Z:

> I’ve heard many pros, other hosts, and hot chicks use the word — I’m proud when I hear it.

> I’ve been using “slaunchy slaunch” a lot recently….but in all honesty it’s a very versatile word.

> My, don’t you look slaunchy today.

One online dictionary — won’t name it but it’s sometimes used by Reaction Innovations for color names — actually has a definition that, oddly, fits: “characterizing something that is awesome or in one’s favor.” Like: “That’s friggin’ slaunch, dude!”

Another definition also oddly fits: “Slaunch is a term often used by the design community to describe…a ‘low slung’ visual attitude.” Like: “Almost all of Dr Seuss’ landscapes are characterized by ‘slaunch.'” [Seriously that was their example.]

To me, the Doc Seuss thing fits too cuz Z used to read McElligot’s Pool every day growing up as a kid on the mean streets of Chicago: 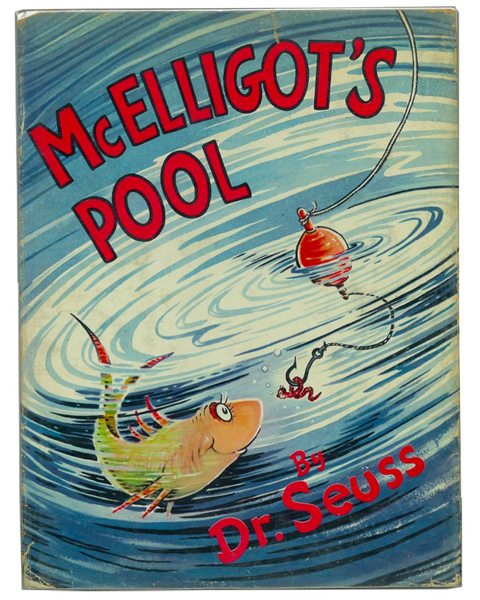 Actually not sure about that last one, but I know he won’t eatÂ green eggs and ham.