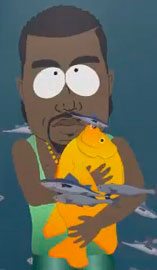 How would you feel if you caught a bass that had a deep voice but wore a dress and carried a purse? Well, that’s basically what’s going on thanks to what are called “endocrine-mimicking” chemicals â€“ stuff dumped into water that causes things living in the water to be “gender-challenged,” shall we say.

Been going on for a while now, also affects reptiles and even mammals. Not cool. Some news from the dark side of bass below â€“ take a minute to read it, it’s pretty disturbing. And important.

> Male smallmouth bass with female traits have turned up in the Susquehanna River, the second major Chesapeake Bay tributary where “intersex” fish have been detected.

> More than 90 percent of adult male bass examined in the Susquehanna in the past year had immature egg cells in their testes [!!], said Vicki Blazer, a fishery biologist with the U.S. Geological Survey.

> Such interesex traits are an indication of animals being exposed to hormonelike chemicals, and Blazer has previously found the condition frequently among smallmouth bass caught on stretches of the Potomac and its tributaries where farming is intense or where development is dense.

> Initially, the federal biologist suspected chronic low-level exposure of fish to pharmaceutical drugs and personal-care products, which are flushed down toilets and drains and show up in discharges from wastewater treatment plants. But Blazer said her research failed to find any greater frequency of intersex fish downstream from wastewater plants, prompting her to broaden the possible list of chemical exposures to include agriculture. “What we’re really looking at is complex mixtures,” of traces of many different chemicals.

> A recent study found intersex fish more often downstream from large-scale animal farming operations…. And the intersex condition is found more in spring, she said, when fish spawn and farmers treat their fields with atrazine, a herbicide used widely around planting time.

> While smallmouth bass remain relatively abundant in the Potomac, anglers and scientists alike have grown concerned over a dropoff in the fish in the Susquehanna in recent years. Geoffrey Smith, a biologist with the Pennsylvania Fish and Boat Commission, said die-offs of young bass occurred in 2007, 2008 and again this year. But the immediate cause appears to be bacterial and fungal infections, he said, not necessarily the intersex condition Blazer has found. [The solution? Ban tournaments!]

Then The Baltimore Sun ran another article about transsexual bass, highlights below.

> Scientists have found more intersex fish in Maryland, this time on the Eastern Shore, and their research suggests one possible source of the gender-bending condition could be the poultry manure that is widely used there to fertilize croplands.

> Six lakes and ponds on the Delmarva Peninsula sampled over the past two years have yielded male largemouth bass carrying eggs, according to University of Maryland scientists. Those are the first intersex fish reported there, though researchers found the condition several years ago in smallmouth bass in the Potomac and its tributaries, and recently found it in smallmouth bass in the Susquehanna.

> Intersex fish are a concern, scientists say, because they could be indicators of contaminants in the water, affecting their growth and reproduction.

> The intersex condition in the Shore fish is not as severe as it is among fish from the Potomac or Susquehanna, the researchers said, but it appears to be widespread…. “We find it in every lake that we look,” said Daniel J. Fisher, senior research scientist at UM’s Wye Research and Education Center in Queenstown. “We found fish with intersex in all of the lakes, and the percentage [with the condition] ranged from 33 percent of fish we sampled to 100 percent.”

> Roger Tragesar, president of the Maryland Bass Federation, said his group’s members are concerned about reports of intersex bass, but still unclear what if anything they may mean to the health or abundance of the fish. “I don’t think we’re…losing a lot of sleep over it just yet,” Tragesar said, “but we certainly want people to stay focused on it and do everything they can to determine why this is happening.”

Not Your Average Q&A: Dave Wolak
Reehm Not Driven by Classic, AOY Titles
To Top
We use cookies to ensure that we give you the best experience on our website. If you continue to use this site we will assume that you are happy with it. Cookie settingsACCEPT
Privacy & Cookies Policy