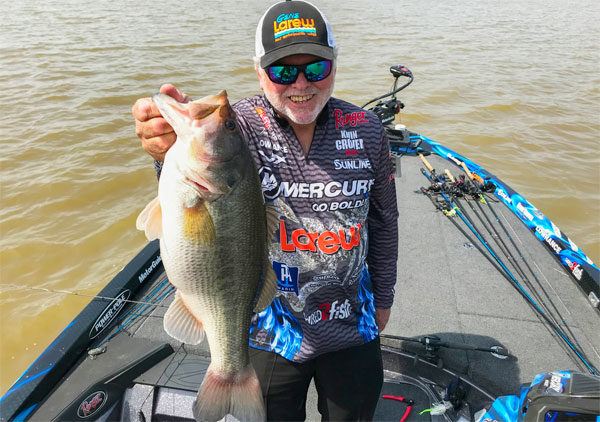 Few things got me on this topic:

1. Guys are doing great in tourneys using the Hardhead/Biffle Bug, and not just in OK.

So here you go — how this rig developed and how it’s supposed to be fished. Q&A:

How did the whole Hardhead thing develop?

> Tommy: “A friend had it and gave it to me…said, ‘Try this.’ He’d been putting a worm on it, or a Senko, something like that. I had it probably a year, and one day I looked at it and wondered what it’d do with that Bug on it.

> “I had it tied on and laying in my rod box…. [Advanced Angler’s] Dan O’Sullivan was over here doing stories for Gene Larew…it was winter time — we don’t ever fish out here [Fort Gibson, OK] in the winter. He said, ‘We need to go catch a big fish.’ I said, ‘Well, I don’t know if we can get a bite!’

> “We went out there and ran down to a place. When I opened the rod box, that Bug and Hardhead was laying on top of the rods and I thought, I’ll just throw this. First cast I caught a 5-lber. I was ecstatic because I caught one! We took pictures of it, then went back over [to the spot]. I made a cast and caught another 5-lber. [Same thing 3 more times] — 5 5s in a row in 5 casts!

> “Dan said, ‘The heck with this, give me one.’ We caught them about every throw til dark. That’s how it started. I’ve had them tied on ever since.”

Tommy’s first Hardhead/Bug win was on Fort Gibson in June 2010, when a Bassmaster Elite was moved from the Arkansas River. Couple weeks later he won a PAA tourney on it, at Cherokee Lake, TN. Two way different bodies of water. Then:

> “…attracts them because it’s beating and banging on the rocks on the bottom. So I thought it was only good on the rocks. About the only place we fished it was rocks. Then on the Mississippi River [2013 Elite out of LaCrosse, WI] I won using it on sand. There wasn’t a rock around, just pure sand. That got me to thinking you can probably just throw it anywhere.

> “…I’ve caught ’em real good out of grass lakes on it. It’s kind of like the Rat-L-Trap deal…catches on the grass and you pull it free. Same deal with that Bug and Hardhead…. I’ve caught real big stringers doing that.

> “The great thing about it is there’s not really a wrong place to fish it. Super, super muddy water is maybe the only thing I’ll say it’s not as good in.

> “It’s a good search bait — you can tell if there’s rock, gravel, sand just by reeling it.”

Was the Biffle Bug developed just for the Hardhead?

> “No, I had it about 3 years before the Hardhead came out. I made it for a flippin’ bait.”

If it wasn’t designed for the Hardhead, why is it so good on it?

> “I don’t know why it’s so good. A lot of companies have made a lot of different baits to put on a Hardhead or something like a Hardhead, but I don’t know of any that can out-catch it. Maybe it’s the design and action — it has a real good swimming action….” 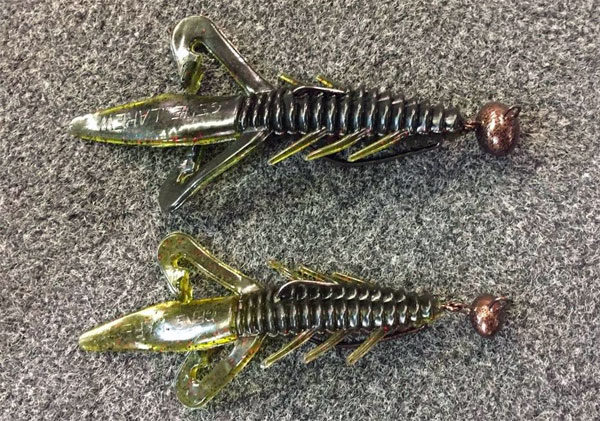 What’s up with the middle flat tail on the Biffle Bug? It’s not like any other creature or craw — what’s it for?

> “The tail’s concave. It kind of catches the water when it’s going down and makes it glide around. We scored the legs on it, so if fish aren’t real active or biting real good, or a front comes…you can pull those legs off so it’s a slender bait. If you put a 3/16-oz sinker on [a legless Bug]…spirals when it falls, just like an old tube used to do.

> “The inside of the Bug is hollow. That makes it soft, but also makes it so you can put scent in it, a rattle in it, or a piece of earplug foam in it to make it float and fish it like a Carolina rig. I put scent in that hollow cavity all the time — the scent stays in there. I don’t put a rattle in it a whole lot because they’re usually biting it.”

[He swears by Bug Juice. His fave flave for the Hardhead/Bug is crawdad and garlic.]

> “I think the tail and legs make it good on the Hardhead.”

How do you fish the Hardhead/Bug combo?

> “They like it better when you’re reeling it pretty quick. I tell everyone, ‘The faster you can reel it and keep it on the bottom, the better they like it.’ …one of the easiest baits in the world to fish — throw it out there and reel it back. The fish will pick it up and swim with it a long ways before they ever drop it. So it’s a real easy bait for anybody to fish.

> “…if you reel it slow then you get hung up more. If you reel fast, it hits those rocks and ricochets and bounces.

> “It’s really good-looking as it’s running along the bottom. When that head hits something, the Bug just hops up.

> “But you can drag it slow or fish it like a jig. They’ll still bite it slow — there’s really not a wrong way to fish it.”

What’s your favorite Hardhead/Biffle Bug combo and gear for fishing it?

> “‘Sooner run’s gotta be my favorite color with the Bug and Hardhead, and 7/16 is my favorite weight. Most of the time I’m fishing it fairly shallow — out to 7-8’. It depends on the bank you’re fishing.

> “If it’s flat like Fort Gibson, you can throw that 7/16…but if you go to Tenkiller or anywhere with steep banks, you have to go to 11/16 because it’s harder to keep it on the bottom when you’re going down a steep bank. 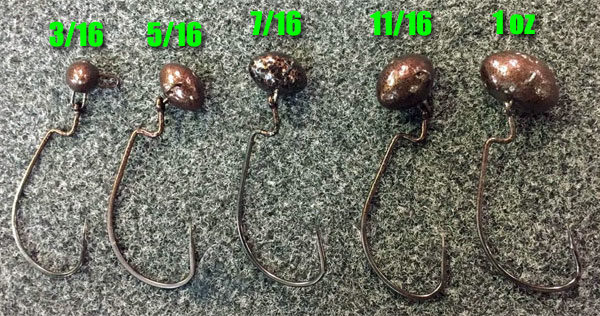 > “My rod is usually 7′ 6″ — heavy, but lighter than a flipping stick. I used to throw it on a 6′ 10″ H but I got in a situation on the Alabama River…. I was throwing it upcurrent and bringing it down with the current, and those big ol’ spots were getting it. Every now and then I’d hit one halfway back, he’d swim downstream and I couldn’t catch up to him. So I changed to a 7′ 6” H, got a bigger stroke on them and didn’t miss any.

> “…20-lb Sunline Shooter. 20-lb line mainly because of the abrasion you get from dragging it over rocks. That Sunline Shooter is the most abrasion-resistant line I’ve found, and it doesn’t have much stretch at all so you get a good hookset and seldom do I break off.”

> Before the Fort Gibson Elite that he won: “I’d been catching them on a color now called ‘Sooner run’ [which is what that Elite was called, back when B.A.S.S. named its tourneys]. …went to get some more [at Gene Larew] — they said, ‘We don’t have that color.’ I said, ‘You’ve got to make that color.’ They didn’t want to make it. So I got some watermelon red, and took a black Sharpie and colored the back of it black. They smelled like a Sharpie. And I was killin’ ’em on it. So I talked them into making some for that tournament, then won that tournament on it.” [At the time it was a new color for Larew.]

> Any other plastics with a Hardhead: “Big worms on ledges and stuff…swimbaits.”

> The Hardhead vs similar wobble heads: “I think the way the wire tie and hook are positioned on the lead are the right angles. …lots of people try to make [similar wobble-heads]…guy who makes lures called me and said, ‘I have tried them all, all the head designs and stuff, and that’s the best dang thing I’ve ever seen.’ We also put the best hook in it I thought we could…an Owner. It’s one of the most expensive hooks you can use….”