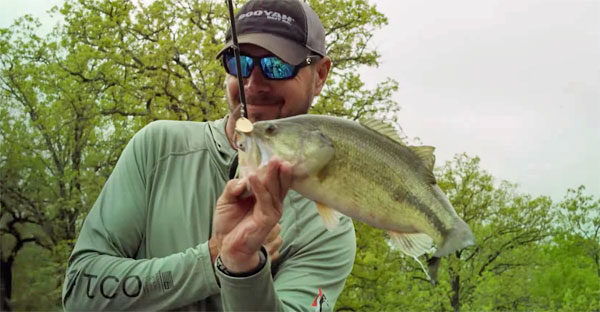 Jason Christie and I are opposites when it comes to spinnerbaits. For example, I’m handsome — no wait, that doesn’t have anything to do with spinnerbaits…hahaha! What I mean is, I know zero about spinnerbaits but Jason knows a TON, most of which went into the BOOYAH Covert Series. So I talked to him to download some of what he knows, and found out I barely scratched the surface. But it’s still real interesting, so here you go:

Me: There’s a million spinnerbaits — what makes one good?

> “I believe that across the board, every component of this [Covert] spinnerbait is the highest quality you can get.

> “We’re spinnerbait people [Jason, his dad and his uncles]. We’ve spent a lot of days, all day, throwing a spinnerbait…we learned blade combinations, colors, what worked best. We learned all that stuff.

> “We started out the same [as many], in the garage. A few of our components were good, then something would happen, then we would change it. [Eventually] we got to the end result…why I think this spinnerbait is top to bottom filled with the best components. And that doesn’t always mean most expensive. It’s what works the best on the water.”

Do you think a lot of spinnerbait knowledge has been forgotten over the years because of Chatterbaits and swimbaits?

> “20 years ago a spinnerbait was the deal. In the middle of the water column, it was a spinnerbait or crankbait, one or the other. A spinnerbait covered a whole umbrella of situations.

> “Over time we’ve gotten better as anglers, and learned that when the water is too clear another bait is better — a swimbait. Or whenever there was a lot of grass and you needed to be able to rip the bait, a bladed jig could be better.

> “But the spinnerbait still has its place…hasn’t been forgotten, just other baits under specific conditions probably perform a little better.

> “If you throw a bait all the time, you’ll get a lot of confidence in it. You’ll learn the little tweaks. Now we throw a swimbait, a squarebill, a bladed jig — people don’t throw a spinnerbait as much as they used to, so maybe they’re not as sharp with the little ins and outs as they used to be.

> “For me, it’s a confidence thing. In certain conditions — a pretty wide range — I can make them bite a spinnerbait. That’s just the way it is. And sometimes confidence trumps everything else.”

Are spinnerbaits a year-round bait?

> “There are better baits based on water color and time of year, but there’s some things a person can do in retrieves, blade combinations, colors and spinnerbait weight to get more bites throughout the day.”

Why come out with these baits now?

> “I’ve held onto this stuff for a long time. You try to keep everything secret…but it’s just impossible with what I do. Cameras are in the boat every day. I just felt like…my dad and my uncle sitting there in the interview [BOOYAH did about the baits], I could see their pride in talking about what we’ve done.

> “We want to share what we’ve learned and help everybody else catch more fish. There’s a big bag of tricks that was let out. Did we save a few? Absolutely. But 98 out of 100, we let out.”

Do you believe they’re the best spinnerbaits ever made?

> “I don’t ever in this industry use the word ‘best.’ I’ll tell you why I use this [spinnerbait]: Every component has been tested for 30 years. The head was kind of the last thing to come around, but we’ve done a lot of testing with that.

> “I can tell you that if I were to go fish an event tomorrow and try to compete for mega money, I’d pull that spinnerbait out of the package, tie it on and be 100% confident. There’s not one thing I could do to make it perform better than what it does out of that package.

> For me, personally, the way that I fish, these are the best spinnerbaits.”

I’m not a spinnerbait fisherman, but when I tied on a few of these baits it seemed like they track real straight, and get straight again real fast after they hang up or roll over vegetation, and they seem a little more effortless to fish.

> “It comes through the water easier. That goes to the number of the beads between the blades, the size of the clevis — every little thing on that spinnerbait has been tested. If you change the number of beads, it changes the spinnerbait.

> “Vegetation, when it gets stuck or rolls over it immediately tracks straight — that lopsided head counteracts the torque. The size of the blade, the length of the swivel…that’s why I’m telling you — not hours, days or weeks went into this. It was many years of testing that went into this.

> “I can remember asking [his dad or one of his uncles in the boat years ago], ‘My spinnerbait’s not rolling but yours is — what’s the difference?’ There’s countless hours and years of working on this.

> “There’s 72 different [Covert spinnerbaits], and every one of those has a purpose.”

If you had to pick your top 3 Covert Series baits, what would they be?

> “First and foremost would be the 1/2-oz chart/white silver scale [skirt] with a pearl head and a single gold Colorado. Just day in and day out, you can catch them in dirty water and semi-clear water anytime on that. It’s just all-around…around the spawn.

> “Second is the same bait with tandem CO’s silver and gold — the big blade is gold, the kicker is silver. You can fish it all year round…after the spawn into the summer.

> “The third one would probably be 1/2-oz chart/blue, red head, gold blade and red kicker blade. That’s a bait to throw in extremely dirty water.

> “Give me those baits and I can catch them year-round from TX to NY.” 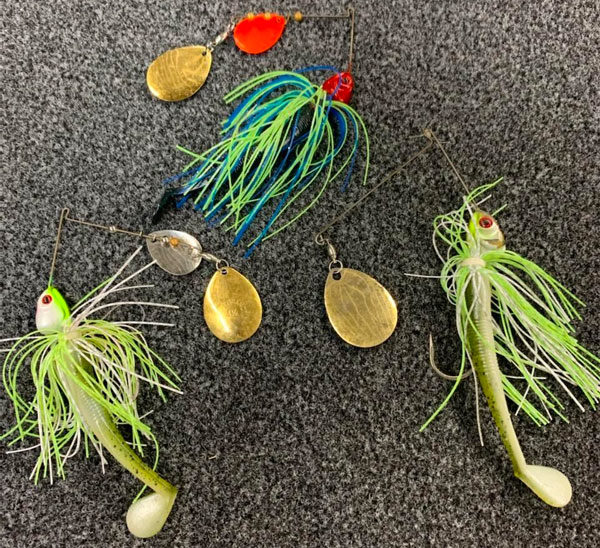 Do you have a favorite spinnerbait setup?

Do you have a favorite trailer?

> “…can use that trailer to slow the bait down, lift the bait, make it go slower. I’ll use other baits like a YUM Swim’n Dinger [pictured above] if I don’t want it to float as much or a Thump’n Dinger. We could sit here for days and talk about spinnerbait fishing.”

Over the years we’ve heard that we need to retrieve spinnerbaits at a depth where we can see ’em. You agree with that?

> “In a lot of cases that’s correct. I always like to fish it where I can just barely see it. But there’s a lot more to that than just the spinnerbait. It tells you where those fish will set up and the depth you should be fishing.

> “Before the spawn I’ll slow-roll it out of sight…about halfway down.”