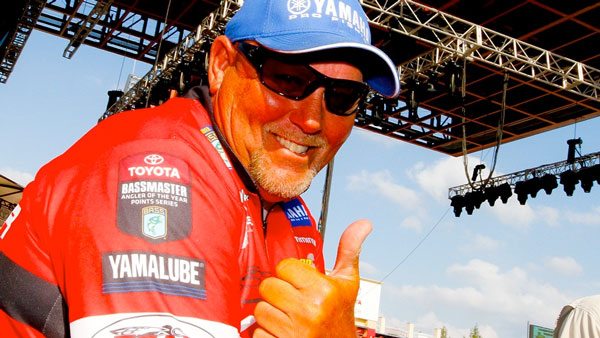 Matt Herren won the Toyota Texas Bass Classic on Lake Ray Roberts by half a pound. A tight one in challenging conditions, here’s how he did it.

> “The lake was 2′ over full, and they started dropping it drastically when we got there. Early in day 1 of practice, the fish were in the bushes and willows, but they started coming out. By mid-day on the 2nd practice day, we’d lost a foot of water.

> “I picked up on it and knew I had to make an adjustments. I figured out where they were going â€“ into the drains on spawning flats…started suspending around salt cedars in 6-10′. The fish were halfway down the water column.

> “It was a reaction bite. I’d throw it in the shadiest spot on the tree, let it fall to the bottom and if a fish didn’t have it I went to the next tree. I fished thousands of trees.

> “The line would just curl and swim off. What didn’t make any sense was they left the tree like another fish was with them. That gave me trouble the first 2 days because I thought I’d catch another [on the same tree] but never would. 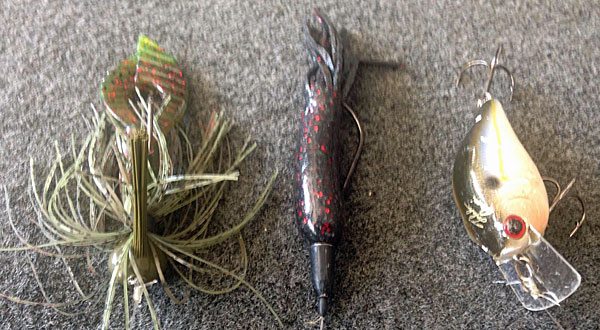 > “Day 3 was cloudy and windy, totally different weather conditions. I’d had struggled all week early, not really catching anything before 10:00, so I gambled. Instead of struggling all day I decided to try something a little different.

> “Bill Lowen and I work together on the Elites. He told me he was working an area that had a pretty good shad spawn going, and since I was struggling early to go there…bridge corners.

> “I caught a 3-08 on a Lucky Craft RC 2.0 (threadfin shad). The shad were spawning on the rocks, and the bass were on the rocks â€“ it might have been a foot deep. I was just casting it to the shallowest rocks.

> “I got that 3-08 and a couple 2-lbers…a big bonus for me considering I had struggled early. It settled down and just went fishing. I caught a 5 on a big hardwood tree in the middle of some willows, a 3-08 on broke-over willows â€“ I just got into a groove. The sun never came out. I never caught a fish doing what I’d done the first 2 days.

> “[Later] I went back shallow and caught a key 3-lber and another fish on a 4.5” salty flipping tube, black neon. They were shallow â€“ fry-guarders in the backs of pockets.

> “I fished the tube with the same rod, reel and line as the jig, with a 1/4-oz Elite Tungsten sinker and a 5/0 Hayabusa straight-shank hook.

> He fished 4 creek arms: Wolf, Indian, Buck and Isle du Bois, which is pronounced “I’ll have no ideal.”

> “I thought I had a chance to win the tournament. After practice I was very excited. I’d picked up on where I thought the fish were going, and I was watching the other guys fish and knew they hadn’t figured it out. They were really keying on willows.

> “I had several bites on the last day of practice â€“ giants, 7-lb bites. I felt like that was going to get stronger. I didn’t anticipate struggling with it as much as I did.

> “I never really did settle down on an area where I felt like it was going to go down. That kept me on my toes, and when you’re losing 6-10” of water a day, that’s a good thing.

> “One of the biggest reasons I haven’t won til now is just dumb luck. I haven’t fished badly, it’s just every tournament when I came in 2nd or 3rd some guy won it on a glory hole. You can’t beat a guy who’s on a glory hole. There’s been five tournaments where, had it not been for one angler finding a glory hole, I would’ve won every one of them. So you have to be careful in evaluating making big changes in what you’re doing. I’ve been averaging over $100,000 in winnings per year throughout my career â€“ I don’t need to change much. I just need a little luck, man!”

Lane’s, Combs’ and Mueller’s patterns from T-Bend
How Thrift and Clausen fished the TTBC
To Top
We use cookies to ensure that we give you the best experience on our website. If you continue to use this site we will assume that you are happy with it. Cookie settingsACCEPT
Privacy & Cookies Policy