Here are the 2nd-, 4th- and 5th-place patterns from the Bassmaster Elite at Toledo Bend. Short and sweet. 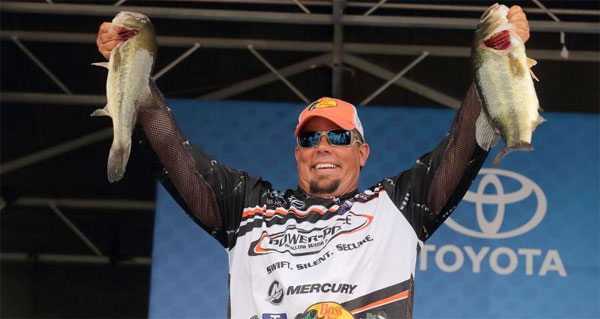 > “I fished from the bridge down…topwater on the edges of the grasslines and by cypress trees.

> “I’ve been throwing topwaters my whole life â€“ it’s pretty much what I was raised on â€“ and the size of the fish that were biting kind of led me to do that.

> “The wind played a big factor. If it was blowing, it was hard to throw the topwater. But a little wind was really good.

> “IÂ  went to my first spot to flip the bushes and had shad spawning right in front. That let me pull out the topwater. I caught some flipping as well.

> “I was fishing the mouths of creeks and big pockets. I stayed on the main lake â€“ I never really went too far back.

> “Cypress and grasslines in 4′. The bigger bites would come in the afternoon.

> “I caught them on topwaters â€“ including a Snag Proof Ish’s Phat Frog (white) and â€“ flipping a Luck E Strike Drop Dead Craw (Okeechobee craw). I rigged the craw on a 4/0 Trokar Flippin Hook with a 1/2-oz XPS tungsten weight. 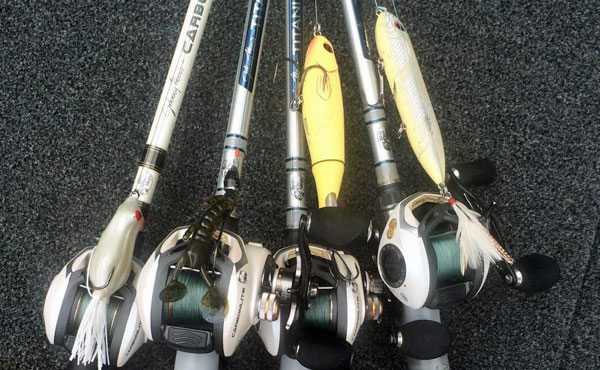 > “I fished all the baits on the same setup: 7′ 4” medium-heavy BPS Titanium rods, 7.1 Carbonlite BPS reels and 50-lb Stren Braid.

> “Toledo Bend is in great shape. I felt like if I stuck with my guns and picked up a 5- or 6-lber every afternoon I’d be in good shape, and that’s the way it worked out.” 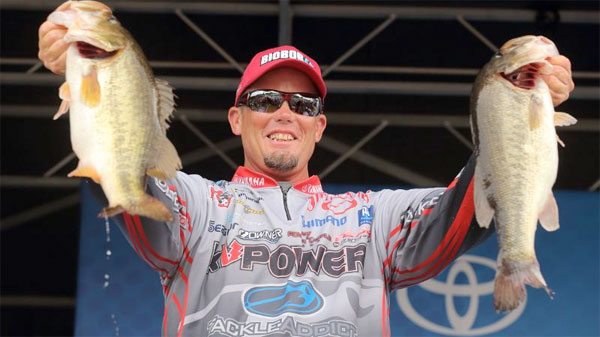 > “The first, 2nd and 3rd day I started close to the dam and worked my way up north. I ran over 100 miles those days. Day 4 I fished the north end all day.

> “I just concentrated on little corners of main lake ridges and creek intersections. I think
they were more related to the drop: Some places had some brush, but I think the fish were just concentrating on areas that had shad.

> “They were schooled up like white bass. Every place I caught a 5-lb fish, I had to go through all those little ones. You could sandwich a 5-lber between 12-incher and a 2-lber. I’m almost certain I caught over 100 keepers the first day, and at least 40-50 per day after that. You just had to catch them and cull through the little ones.

> “I did mix it up a little, but I couldn’t figure any way to keep from catching small fish and my confidence was in that 6XD.

> “I was keeping it in contact with the bottom. Most of the time my boat was sitting in 22-30′ and I was casting on top of a ledge in 12′. I feel like most of my bites came in the 12-15′ range when the bait was contacting the bottom.

> “I reeled fast â€“ I tried to fish it really aggressively. If I slowed it down I was definitely doing to catch a white bass. Fishing fast you’d still catch them, but…. I had to make as many casts as I could during the course of the day 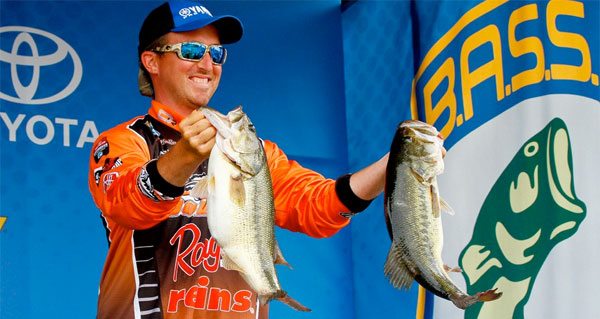 > “I fished the Strike King 6XD and 10XD in the morning when there was low light and wind. Fished them on a Dobyns Champion 805 CB glass Paul Mueller signature deep cranking rod with a Lew’s BB1 5.0 reel and 14-lb Gamma Edge fluorocarbon.

> “I also finished my limit and caught some key fish including a 5-lber on day 3 on the 7” Reins Bubbling Shaker in margarita mutilator. 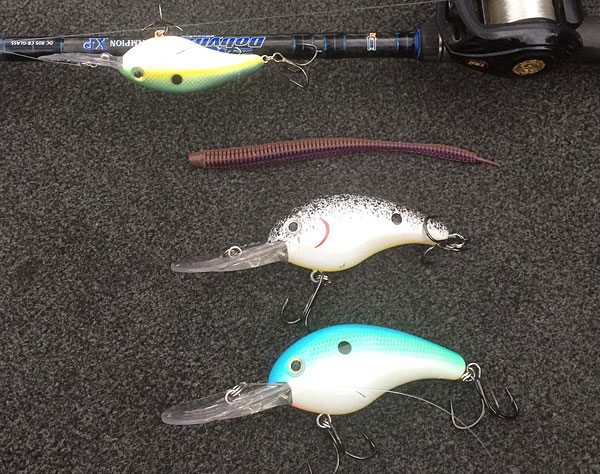 > “I focused on points and flats 15-23′ adjacent to creek or river channel.s These were the first stops for the post-spawn bass and they were feeding on yellow and white bass that I believe were spawning because I would have eggs on my bait and line sometimes when I was cranking.

> “Fast retrieve with the crank â€“ you had to make contact with the cover. Slow and methodical with dropshot.”