FLWer Bryan Thrift almost baked a cake at the TTBC on Lake Ray Roberts, TX â€“ and didn’t even have a recipe. He was just fishin’. Here’s how:

> “The first day I caught the bulk of my weight on a white 3/8-oz buzzbait in 1-3′. I was fishing main-lake stuff, the result of a terrible practice. I was hoping to come across a shad spawn.

> “The first day it was perfect conditions for flying down the bank â€“ heavy cloud cover and no wind. The fish were up there shallow, so it was just cover water and get a reaction. My trolling motor was on 80% percent, I’d cast as far as I could and wind back as fast as I could.

> “Day 2 I started out with the same plan. We had sun and wind, but the wind had changed directions. In practice it was N/NW, and day 2 it was E/SE. It was blowing right in on the stuff where I caught them on the buzzbait, so that morning I ran to the same places.

> “I caught a small limit â€“ on a spinnerbait, a Damiki Mamba Jig, a Damiki Armor Shad â€“ then the sun came out pretty good and I caught two good fish flipping a Damiki Knock Out.

> “Day 3 it was partly cloudy and the wind was just like it was on day 2. But I never got any bites going down the bank. About 9:00 I bailed and put the flipping stick with the Knock Out in my hand the rest of the day. I was flipping bushes.

> “I was mostly targeting small willow bushes â€“ I don’t know why the smaller bushes were better. I also caught couple fish off some hardwood stuff. 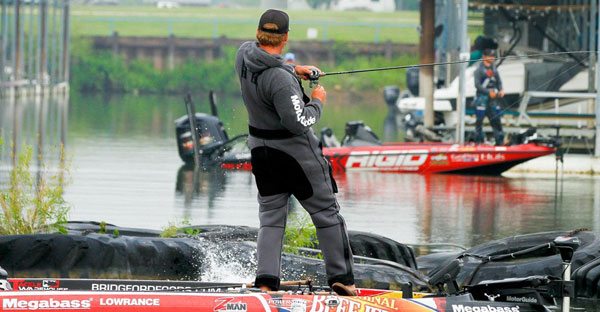 > “The next morning I had one there about 1.5 lbs, the third morning I caught a 4.5. From there it was wide open â€“ I fished new water every day. I caught them on a frog, flipping bushes, a buzzbait, several topwaters.

> “I was just fishing everything on the lake that looked good: little sections of rock on the bank, main-lake bushes, backs of pockets. No real-defined patterns by any means. I fished shallow pretty much the whole time. The lake fishes pretty small â€“ you could fish the whole thing in a day.