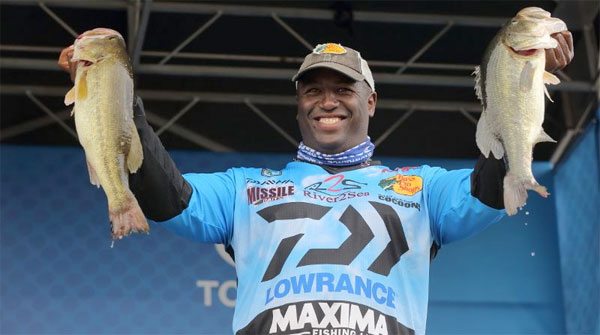 > “The water wasn’t as hot as all the way in the back [of the creeks], and if you’re more toward the mouth they have an option to try to go deeper. In the middle section they don’t have that option.

> “People have a misconception that all fish go deep in the summer. They only go deep if deep-water accessibility is close.”

> “I was fishing bushes and cypress trees â€“ hard cover â€“ no deeper than 2 feet.”

> “I was fishing a River2Sea Tommy Biffle Junkyard Jig in black/blue, 3/4- and 1/2-oz, with a Missile Baits D Stroyer in bruiser.” 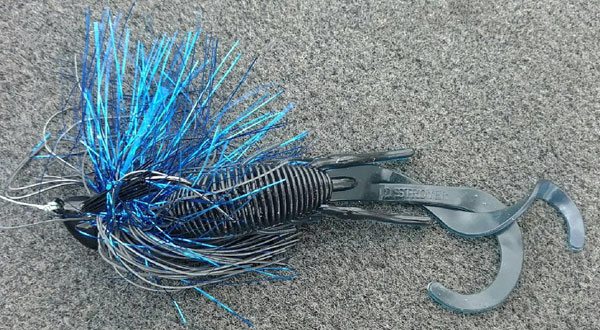 > Why he used the black/blue color to mimic bluegill: “These bluegill were really, really dark. I don’t know why. You could see thousands of bluegill, and the majority of them were black. Even the bluegill fishermen around me were commenting on how black those bluegill were.”

> “The heavier a jig is, it creates a reaction strike when hits that hard cover. And it falls through [the cover] a lot easier. I started out with a lighter weight and got more bites, but bigger fish started biting the heavier jig.

> “I watched the bluegill. If one got chased by a bass, another bass would eat it. It was that triggering â€“ the more commotion you could generate, the better.

> “The first 3 days I was just flipping it in and letting it go to the bottom. The last day I hopped it really hard in the cypress roots to get them to bite. I was hopping it and making it hit hard on the roots. They would bite it when I hopped it out. They’d jump up and grab it, and run out from the root system.

> How he got on that day 4 retrieve: “I wasn’t getting bit and got snagged in the roots, so I hopped the jig [to unsnag it] and one ate it. I hadn’t been getting them to bite so I started doing that.”

> Why he flipped: “I love flipping. And one of [his early years on tour] we fished Toledo Bend and several locals told me, ‘When the water’s high and in the bushes, regardless of what time of year it is, go and fish those bushes â€“ because the fish are there.'”

How KVD won at Toledo Bend
Lane’s, Combs’ and Mueller’s patterns from T-Bend
To Top
We use cookies to ensure that we give you the best experience on our website. If you continue to use this site we will assume that you are happy with it. Cookie settingsACCEPT
Privacy & Cookies Policy