Don’t get Ish mad! Don’t be gettin’ Ish fired up! Cuz then he’s gonna take your hard-earned wages and buy himself another offshore tuna trip…or something. That’s pretty much what went down at the 3-day Cali Delta FLW ‘Yota derby — Ish won it by 16.5 lbs against a bunch o’ Delta sticks.

> “I’ve dished the Delta a little bit — I’ve been fishing some Wednesday night tournaments. It’s kinda funny because the Wednesday night tourneys aren’t a big deal but some guys get real hardcore and serious about it. I’d been getting my [rear] handed to me, and the guys started talking trash –‘You’re really not that good, I should be on tour, I can compete on tour, I need to be fishing for a living’ — just talking trash. I said, ‘Okay the Toyota Series is coming, put your money where your mouth is, but down a $1,700 entry fee and let’s see….'”

> “…2 weeks prior to the event you get to fish the tides that are the same as [will be in] the event. So if it’s high in the morning, in 2 weeks it will be high again. I practiced a bunch that 2 weeks prior, then spent more time the week prior to it….

> “I felt okay [about his practice] — I didn’t feel great about it because I had a lot of different conditions. …with those fires there was smog in the air, which pretty much gave me low-light conditions during the course of the day…so much haze in the air.

> “I formulated a plan…the Lowrance HDS Live units have a tide chart actually on the unit…will tell you the tide and each minute of what the tide is doing. It’s super accurate. I’ve seen on the East Coast where wind — if it’s blowing in a certain direction will hold the tide out or in, or bring it back in…but I’ve never seen it on the CA Delta. We don’t get wind storms that way here.”

> “The first morning…place I wanted to start on had 30 minutes of actual slack tide. If there’s one thing you don’t want on the Delta in summertime it’s that you don’t want to fish anywhere there’s slack tide. The fish in summer relate to current because it’s a little cooler and brings the feed to them. On a slack tide the fish can be there, but won’t bite.

> “So I decided as I was running south…stopped in basically Middle River [the middle of the Delta] where there was still some tide movement. I literally hit 3 stretches and had 21 lbs. Those places were on my list of spots because I know they’re consistent.

> “I had over 20 in the boat by 8:30 so there was no reason to go to my primary area. I went around and checked a bunch of different stuff. I tried some big-fish stuff I had…to upgrade but I didn’t.

> “Day 2…an hour different…now have an hour and a half before [his primary area got right], so I started again in the same Middle River area. It went okay — I caught a limit with 1 about 6. I had 16-17 lbs in the boat and was feeling good about making the cut.

> “So far I’d only fished 1 area I didn’t plan on fishing during the tournament, and fished 1 of 4 stretches I felt were decent in practice. So I still had 3 other stretches I hadn’t hit yet.

> “Day 3…2.5 hours before my primary water got really good. I started again up in that same Middle River area but on a different stretch…6-lb lead so I did a little experimenting.

> “The first fish I catch is a 5 — a great start. I fish through and catch a limit. It was Saturday, other stretches…some boats on it now, guys had seen me who were just out fun-fishing…. I had a small limit and headed down to my primary area.

> “I knew it was lights out at that point, so I spent the rest of the day trying to help my co-angler catch a few fish. They would’ve had to catch a mega-bag in a 6-hour day to beat me.” 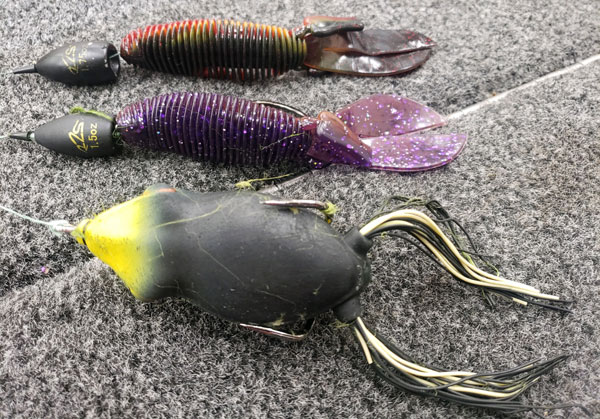 Day 1 he just punched, and the next 2 days he weighed 3 each day doing that and 2 on a frog. Punching first:

> “…matted blown-in hydrilla — blown into the tules on tule berms. Tule berms are high spots on the main channel. The channel is 6-12′ deep and you’re flipping into 1-2.5′.” 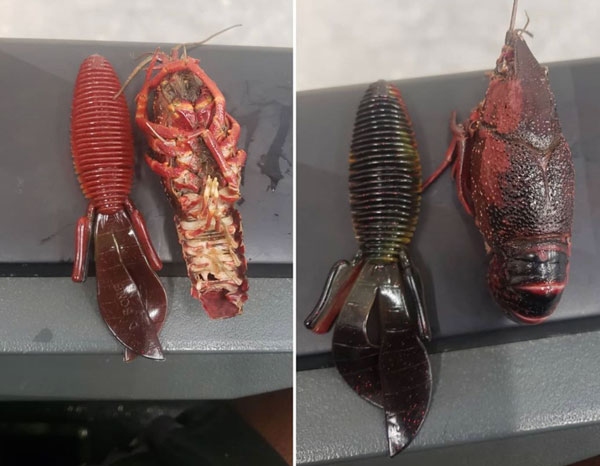 > “Weight size depended on how thick the mat was. The lighter weight gives a better hookup ratio. I did miss a couple fish on that bigger weight — just the way that weight hits the back of their mouth.

> “…tule berms with sparse tules. The berms themselves are made out of dirt, so as the tide started lowering you’d see more dirt. The tules out in front of it [in the water]…[bass] were there feeding.

> Frog color: “Dark days and dark water use a dark color, and light days with light water use a light color. The water a little dirty from the irrigation pumps…pump water out of the fields…and we had that overcast haze from the fires [so] low-light conditions.”

He said yellow head is a well-known Delta color, and he was walking the frog.

> “That Lowrance Ghost trolling motor… would cut through some of the thicker vegetation, it was super quiet –I really appreciate that.

> “HDS Live with the tide info on there is huge when you’re fishing tides. I can type in the date on my HDS Live for tide a year from now if I want to [and get the tides]…helps you plan….”