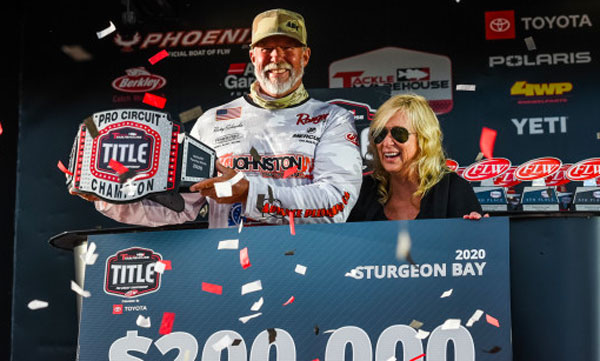 Sturgeon Bay. When’s the last time any big tourneys were there? Hmmm, lemme think. Oh yeah — a few weeks ago! And anyone with eyes, ears or a phone knew a couple things from that deal: stay in Sturgeon Bay and use Berkley MaxScent Flat Worms. And that’s kinda what Rusty did. Deets:

> “I was excited for the [MLF] format. I have [pro] friends that do it, I’m a fan, I watch it. And really there’s no better time to learn a new format than when you get a guaranteed check to start with [all Title guys got a check = #stout]. I was all for it. I like the challenge of it.

> “Obviously we had a lot of fairly fresh stuff to look at [the BPT tourney]. One thing I noticed was they catch the dog outta them there — the guys who have a chance to win do. That’s on your mind.

> “I didn’t get too overly concerned about where [the BPTers] caught ’em. I couldn’t figure it out anyway from looking at the video…. So I tried to show up with an open mind.

He decided on the bay.

> “I’d start on a stretch — I didn’t really have spots, I had areas. I realized after a day and a half, every time I did get bit I was real close to a mark I’d made. Then I started realizing if I Spot-Locked there, hung out, mixed it up my baits a little and fished really thorough, I could turn that 1 bite into 2-5 bites.

> “…beginning part of 3rd period…where I needed to be weight-wise. I was about 25 lbs over 10th place, floating between 5th and 7th. That was good enough for me…so I took off and went practicing.” [Reminder that under the MLF format weights zero after day 3.]

Day 4 was tough — windy, and because of the wind they got a late start:

> “…held us for a good 40 minutes, then adjusted all the time periods so we got a little longer breaks…gave us a little more time to move around…for safety because they knew guys would get out and fight the wind and fish. [The longer breaks] gave us the opportunity to move when we weren’t under the clock so we didn’t have to do things so dangerously. All great ideasthat worked well for all of us.

> “Under those conditions you don’t know…luckily my fish were biting in the morning. I started catching them and ran up to 1st pretty quick…battle was on…. It got harder and harder to fish. Super tough.

> “I went a long period of time without a bite, so with 30 minutes left I made a move. My trolling motor [batteries] was done…. I made a move to an area where I caught a couple keepers throughout the tournament…by no means did I think I could catch a big one there.

> “I was on quality all week, even both practice days — I didn’t see any [non-keepers] til the competition started. Say your average fish is 3.5 lbs. If you can stay on 3.5-lbers you can win on that — you just need to catch one every 6 minutes.

> “All days I launched in Little Sturgeon Bay and the whole time fished within 2 miles of where I launched. I had 10 little areas where I thought I could get a bite.

> “[The bottoms on these spots had] no commonality to them…some were a 100′ long sheet of rock, some were cobblestone-size, some were bowling ball-size. It wasn’t all that important. But one key was to have bait [alewives] around.”

> Dropshot baits: Yamamoto Shad Shape Worm (light crystal clear belly, and when darker out gp or gp green purple flake). “The last day I caught all but my 2 biggest ones on the MaxScent Flat Worms. They were key. I got them from Wade [Strelic] — he was out of the tournament so I took all his stuff. Maybe with the real windy conditions they could find [the MaxScent] because of the smell. Low light and heavy wind — maybe [the fish] start relying on [scent more].

He said he didn’t really drag it because of the mussels and gobies, so he’d make a cast, let it hit the bottom and soak it for a good 30 seconds. He might move it a little, but otherwise he’d reel in and cast 20-30 yards off the last cast.

> “One of the biggest surprises was just how professional and well-managed everything was. I dIdn’t see it going that smoothly. Boat officials, camera guys, the normal [FLW] people I’m used to working with plus all the MLF people there — it was unbelievably smooth. It was really really good.

> “Early in the tournament I had a swimbait and a Ned Rig going. I didn’t do much damage on either one, maybe a fish per, so I stopped even pulling them out of my rod locker.”

> Shout-outs: “Ranger, Mercury, Humminbird, Power-Pole — the people who do what they can for me. Also Tackle Warehouse and Anglers Marine: I’ve been with them for over 25 years and they always help me out.”