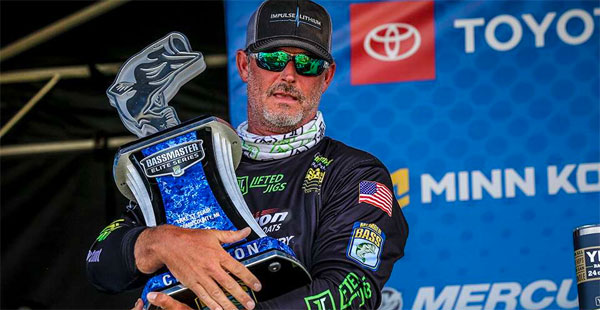 Wow! How ’bout this: “How an AL largemouth fisherman who seriously dislikes spinnin’ rods and hasn’t done well smallmouth fishing before won a Bassmaster Elite smallmouth tourney!” Here’s what went down:

> “Smallmouth have not done me well — if you look back at my finishes you can tell. I have a couple [Elite] friends I talk to a little bit, Scott Canterbury being one of them. I really leaned on him a little to give me an idea…never been to St Clair before, didn’t know what to expect…find this thicker cabbage grass….

> “Day 1 of practice I went to the river and fished the current. I had some good ones, a couple 4s…went fishing for largemouth but couldn’t get anything going….

> “…2nd day of practice…want to fish Anchor Bay somewhere…. It was cold. I don’t like the cold and was running, but didn’t go to [the spot he was planning to]. I was about a mile away from it…just fish there for an hour or so and wait for the sun to come up a little.

> “I sat the boat down and this was really where it happened, by chance. I stopped the boat and put the graph on standby…just drifted for about a mile. I caught like 26.5 lbs in an hour or 2 out there. I was like, I might have stumbled across something crazy.

> “Where I was catching fish [the bottom] was all bare. Little clumps here and there, but it wasn’t like thick vegetation, it had to be scattered. When I got to a hard grassline I moved off of it…

> “I also went to the mouth of Anchor Bay. The Lakemaster chart showed what look like a channel or ditch…funneled then flared back open. I came down that gut or channel and they appeared to be there. I caught 10 over 4 in less than an hour. So…2 areas where I could do my work.

> “Day 3 of practice…I knew Huron could be a player so I went up and looked around, but I didn’t do anything. Day 4 [half day] of practice, I went back in Anchor Bay to see if can find anything else….”

He ended up having confidence in the 2 areas he found on the 2nd day of practice.

> “Day 2 I started seeing that the better quality was in Anchor Bay, so I started focusing on that area a bit harder. I went in there and caught a pretty good one in the morning, fished around then went back to the channel. It started getting rough so I came back to my spot in Anchor Bay.

> “I wasn’t seeing as many fish as I was in practice so I thought maybe they’d moved. I decided to stop 500 yards short of where my waypoints were and landed right on em…big cull.

> “I knew day 3 I’d start exactly where I left them…morning of day 3 is really when the magic started happening. I had a couple quick big ones, then lost one close to 6. I hunkered down and ended up catching 22-10.

> “I went back to the spot at the mouth of Anchor Bay, but the boat traffic was so bad I couldn’t keep the trolling motor in the water. It was almost impossible to fish. I was just hoping I made the cut…. [He checked in a little early.]

> “[That night] I looked at my maps and said, ‘I’m gonna commit to Anchor Bay.’ I just hunkered down. It was phenomenal. I had a couple big ones I didn’t get that really could’ve pushed me up there — it was something else.”

Deets on the spots

> “They were 14-15′ and really needed to be bare. When I started catching the fish…did not see any vegetation at all. I got in the middle of a bare area that was surrounded by really thick cabbage grass. I didn’t want to see any grass on my electronics…then you’d catch them. Most of the time they were roaming…. 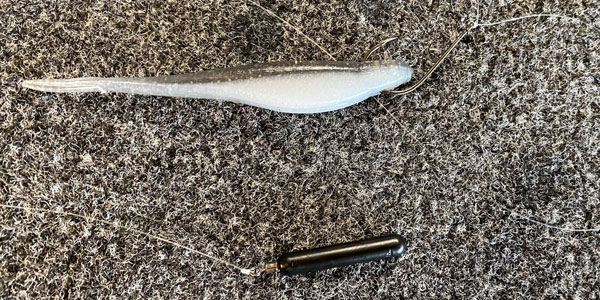 He only used that 1 size and color of Z-Too:

> “…in practice had a couple packs of them, but I went through them because I caught so many. I had 2 left…started throwing something else, but wasn’t getting bit as well. …I got on Tackle Warehouse and they were sold out, so l started looking around and couldn’t find any.

> “Then I called Marks Outdoors, which is local to me in Birmingham…6 packs of them. I called my son and said, ‘Go to Marks, get the baits and…next-day them to me.’ …next-day air is $80 and they won’t guarantee they’ll get there, and I said, ‘I don’t care.’ So they were shipped to me and it cost me $100 for 6 packs of Baby Z Toos.

> “When they came in, I felt a lot of pressure leave me…something about that bait they really liked. I went through every one in the event. …just nose-hooking them — they’d get tore up and I’d still nose-hook ’em looking all scraggly….

> “…key to the final day was making a change to 6-lb line…because of the pressure.”

> He didn’t find baitfish in his wells but said the bass would spit-up bait when they came to the surface: “It looked like something small, similar to what I was throwing.”

> “I only have handful of spinning rods because I really don’t enjoy spinning rod fishing.”