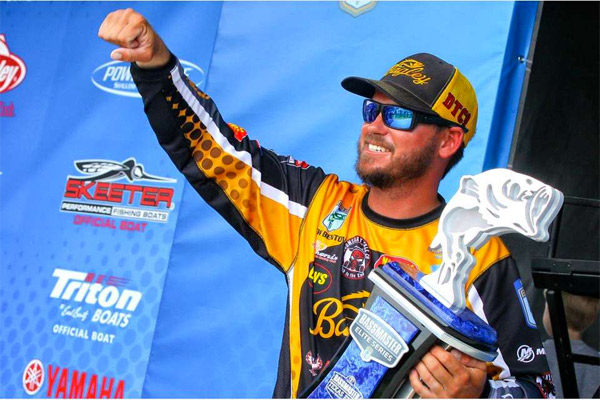 > “The first morning of practice I felt like the shad spawn would be going on. At the first marina sure enough, the shad were spawning and a lot of fish were schooling…. I started running that deal, but caught a lot of little fish. I didn’t know if I could find any quality fish, but it was just a matter of finding deeper main-lake marinas. Or ones really close to the main lake.

> “Those held the big ones. By the 3rd day of practice, I had 3 different marinas where I’d either had big bites or saw big fish under the floats feeding on shad.”

> He was fishing about 3/4 of the way up the lake where the water was less clear.

> “The water temp when we started practice was in the low to mid-70s, but the first day of the tournament it was 79 degrees — the shad weren’t doing it any more. But some big bass were staying around there because they were conditioned to that bite.

> “I caught a big one off the first 2 marinas, then I scrambled around — caught a couple flipping, a couple on top. I kind of jumped around and caught what I caught.

> “The 2nd day I started at the marinas and didn’t have anything. My best 5 were like 6 lbs.

> “My roommate had told me he’d gotten some bites later in the day on topwater. I ran that all day. I found the topwater bites were not around marinas but were on isolated rock — with a good 45-degree bank or a flat bank. Big boulders and chunk rock 4-8′ deep.

> “They had shade that the fish would pull into when the sun would be out. The key was you had to bring your bait by a wolf-pack of fish. They couldn’t be singles — they’d follow but wouldn’t bite. If you ever brought it by 3-4, you were going to get bit, no question.”

> “Day 3 I thought I had a solid gameplan, but I had a 3rd marina I hadn’t fished yet in the morning and I knew it had some big ones. I pulled in there, the shad were spawning, and the big ones were blowing up on them. I left out of there with 17-18 lbs. I was jacked — I still had 2 littles ones and all day to fish my primary deal.

> “But the later it got, the more boats got on the water. Every pocket I’d gotten bit in there was a party going on or big ski boats muddying up the bank. It wasn’t happening for me — I could not get bit. Toward the end of the day, I started running the same type of cover but in protected pockets, and I was able to cull twice.

> “Day 4 I figured that if we had all this boat traffic, I’d run pockets that were not on the main lake. But when I got in [day 3] I was assessed a 15-minute penalty at the start of day 4…for falling out of the boat and stepping on the dock. It made me nervous because I was doing all my damage first thing in the morning.

> “I was fishing [that early spot] with Marty Robinson and called him [that night about it] He said, ‘You have an opportunity to win so I’m going to stay out of there. That was huge of him — I really appreciate it.

> “When I got there it was raining. A few fish were schooling but none of the big fish were doing their thing. I fished through it an hour…nothing. But then every now and again I’d catch a fish on 6” Nichols Flutter Spoon, pitching on slips. I caught a 4-10 and…had 1 more bite on it.

> Close to 9:00…still kind of drizzling rain…running main-lake stuff I hadn’t fished with cloud cover…. Wasn’t happening. Pouring rain…picked up a swimbait, didn’t think anything would find a topwater.

> “But every time it slacked up, I picked up that topwater. I caught a 3-lber, then it slacked up a little bit more. One bank, every day had a 3-something follow my bait. I threw it up there and he blew up on it…a 3-10, like it was meant to be. I thought I had it won there [he had 5 fish], and the sun popped out. I went to my best main-lake stretch and caught another 3-lber. At that point I had almost 17.”

> Bagley Knocker B (shad — pic shows bluegill cuz he is out of shad) in the marinas. Mixed in a clear walking bait when it was high-sun and slick. 7′ 1″ H Phenix Feather Rod, Lew’s Magnesium Reel (7.5), 65-lb Seaguar Smackdown braid.

How Wesley Strader won the KY Lake Bassmaster Elite
How Greg Hackney won at the Sabine River
To Top
We use cookies to ensure that we give you the best experience on our website. If you continue to use this site we will assume that you are happy with it. Cookie settingsACCEPT
Privacy & Cookies Policy