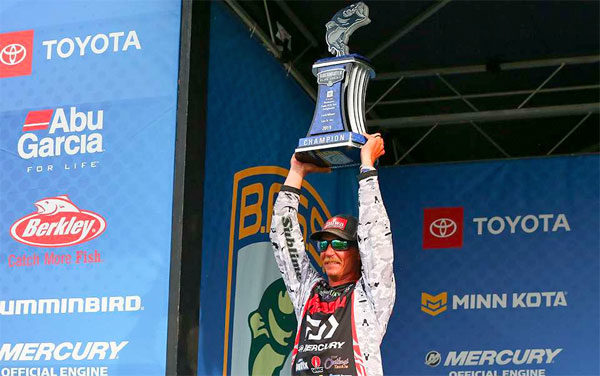 By the insane weight — 77-15 of smallmouths over 3 days — it might seem like fish were just jumping in Seth’s boat. But he actually did fish for ’em. Here’s how he did it.

> “I found 2 mega-wads not far from each other, both on the south end of the lake.

> “…little rockpiles on side scan…stumbled onto them. I idled a bunch of that flat, marked like 100 [rockpiles] and 2 of them were loaded. I have no idea why those 2 were good, wish I did.”

> “Day 1 it blew 20 out of the NE — that’s really when the magic happened. I just got stupid lucky on a community hole I didn’t fish in practice.

> “I had nothing on the north end. Gussy [one of his roommates] had 1 wad of fish he found…started there in the morning. I caught 4 that weighed like 8 lbs…had to go do something else.

> “I was running by the Firecracker — there’s always like a 3-lber on that buoy, so I thought I’d slide in there and fill my limit out. I stopped a couple hundred yards short — I was going to drift by it — and fired out a crankbait. The first cast I caught a 4.5, hit Spot-Lock and banged 26-12 there.

> “I caught 10 big ones there in an hour. Stupid luck. If I’d idled 50 yards closer to the buoy, I’d never have found those fish.

> “It was a little rock flat off the current, similar to the place I was catching them down south…where the river dumps in on the north side of the lake. …11′, rocky sand stuff….”

> “I started day 2 of the tournament [at the buoy spot] but never had a bite.”

So he ran down to his south spots:

> “It was really close to the mouth of the river so there’s a lot of current…quite a bit shallower than any other fish I found. The other fish were in 18′, but both [his wad] spots were in 11′. Sand and rock, not grass — a bit of floating stuff….

> “…lot of bait in that area. They were puking up something pretty big [4-5”] — it was straight white but I think it was perch.

> “…lot of current…lot of stuff sucked through there. Anytime you get around that many fish they get pretty aggressive….”

> “…best wads of fish I’d ever found on St Clair. I normally fish out deeper [where you] get in an area that has them, like a half-mile square, and you catch one randomly every 20-30 minutes. These places…at one place [in practice] I caught one crankbaiting, hit Spot-Lock, cast 3 more times and got bit immediately. The other [spot] I caught one, and two 4-lbers practically came out of the water trying to get it. You don’t usually see that kind of stuff on St Clair.

> “I didn’t really know how good it was til day 3. I can honestly say I believe I caught a fish on at least 80% of my casts. It was stupid.” 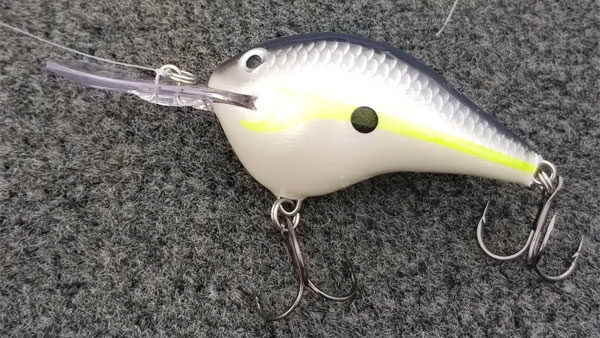 > Why that color: “It’s just what I started with — I had confidence in it.

> “I don’t like hitting the bottom [cranking] for smallmouths. I was a little oversized on my line, so it was running right around 9′. I was pumping it — like speed-fishing a Carolina rig: wind it down, a big long pull, reel it in [repeat]. They hit it right at the end of the pull, like a jig bite.”

> Boat position: “Honestly it didn’t matter, but it definitely seemed like they bit better when you brought the bait with the current.

> “…caught a lot fish on a dropshot too. But looking back, when it was all said and done, I weighed at least 14 on a crankbait.

> “I haven’t cranked much there in years before. You get a lot less bites but the ones you catch seem to be bigger. When you dropshot, you have to go through a lot more fish to get a big bag. Cranking fish tend to be 4+, dropshot fish like 2.5-3.5.

> “The [Humminbird] 360 was nice because I could see the rockpiles and make the perfect cast every time. Spot-Lock was everything because there was so much current and it took so much time to land them [dropshotting with light gear and cranking with trebles] that without that I’d be 100 yards form the spot every time I got one in the boat.

> “Mentally it was kind of a weird position — kind of a nothing to lose or gain tournament so just go out and have fun. That helps quite a bit. And working with my boys — Gussy, the Johnstons and Groh — worked out well. It helped a lot [this season].

> “My Bass Cat Eyra was nice for the rough stuff, My back is thankful.”

How Carl Jocumsen won the Tenkiller Elite
How Paul Mueller won a brutal Elite at the St Johns River
To Top
We use cookies to ensure that we give you the best experience on our website. If you continue to use this site we will assume that you are happy with it. Cookie settingsACCEPT
Privacy & Cookies Policy