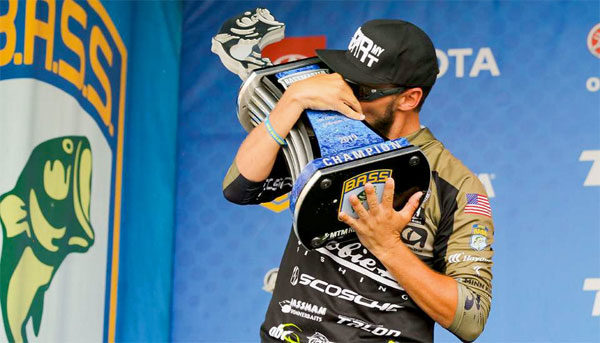 Once upon a time a kid in Australia had a dream. It was about Mexican food. Oops, nope was about BASS FISHING in America. Pro bass fishing, winning a big tourney, “making it.” Danged if it didn’t happen. Carl Jocumsen won the very tough Lake Tenkiller, OK Bassmaster Elite, and here’s how he did it.

> “The 1st day of practice I figured them out on bluff walls on a 1/2-oz jig. When I’ve made good checks…has been with a jig on bluff walls or riprap or dropoffs. That’s what I got dialed into.

> “The water was in the bushes and they were biting there, but it was falling every day. I knew they don’t like to be on flatter banks when it’s falling. They like vertical banks to keep in the same depth and fall with the water.

> “Day 2 it started going away and I started to move offshore…the exact bluff walls I was fishing on the bank, just basically fishing them out deep [ledge]. That’s when I got couple key bites….

> “Honestly it took all of practice and the first few days of the tournament to figure out what the fish needed.”

> “The bluff wall generally had rock. If it had a little bit of any kind of wood, then it was a hundred-percenter. …had to be main-lake channel swings — any point or any bluff that traveled out into the main basin. …had to have a creek arm…mouth of a major creek. 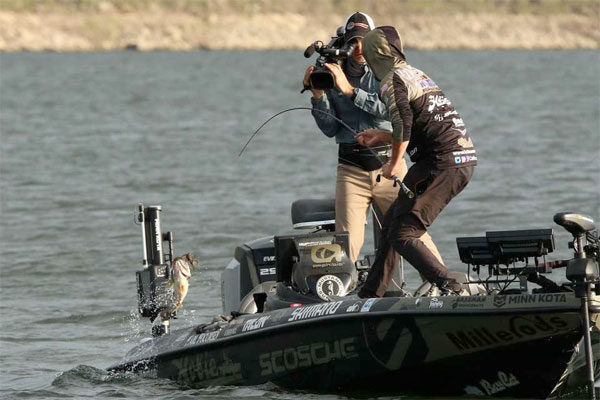 > “I put it 20′ up on top of the ledge [20′ from the drop]. As soon as I felt a little rock or brush up there, I’d work it. [If not] I’d just drag it until it fell off the edge. [‘Work it’ means] basically counting rocks — crawling it over each little piece of cover.

> “The really good spot — where I caught 3 and the big one on the final day — was like nothing else. It was super unique. I found it on day 3. I had 4 good fish and needed a 5th. I’d done my milk run, so I just started looking at my Lakemaster for a new spot to hit. I saw tight contours on the back side of an island and it had a point. But it was an island.

> “Every day I fished a lot of new water just to try to break it down [more]. Day 4 I had 6 spots I knew I could get a bite…not going to fish any new spots…going to rotate those 6 spots in the first 2 hours, then rotate through them 3 times throughout the day.

> “Day 4 I rolled up [to the island spot] and worked my way to [the tree. First cast, he caught one.] …5 minutes later I caught 2 back to back…[jig] falling through the tree.”

After the 4th fish, he went 3 HOURS without a bite til he caught the big smallmouth everyone saw on Live:

> “When I landed that smallmouth, that 5th fish, you can’t even begin to imagine the feeling that came over me. Basically 20 years of every setback you can possibly imagine and every weight of the world on my shoulders was gone in an instant — in milliseconds of grabbing that fish and pulling it into the boat. The feeling was like the blood rushed outta me. It was crazy.” 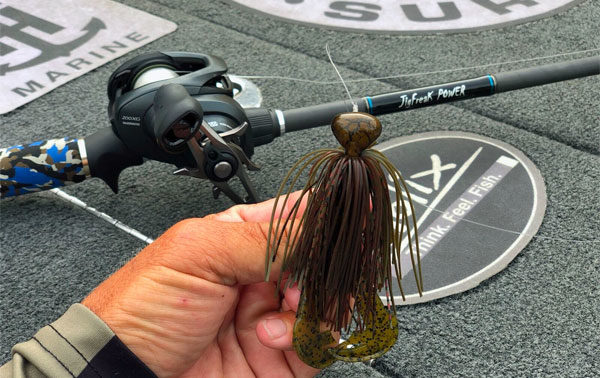 > New (not yet out?) Molix GT Football Jig, mostly 3/4-oz but also 1/2-oz — “The head has a unique heart shape that comes through everything…doesn’t get stuck on riprap and comes through cypress knees. I only had 5 of them so I’d go back to regular football jigs [during each day] because I didn’t want to lose one.

> “I don’t think they’ve come up with color names yet but it was gp brown — a gp top and brown belly. Trailer was a Rage Craw in gp. When the sun was out I’d spray the [claws] with chartreuse. It seemed to make a pretty big difference.

> He also let the jig sit: “The first day I [caught a couple fish when the jig was] sitting there for 10-15 seconds. I cast it out and when I was dialing in the Lakemaster or 360, the line would go ‘thunk’ and I’d think, Okay. So when it hit the bottom the last day, I’d count to 10 before I even moved it.”

> Rod: 7′ 6″ M Millerods JigFreaK Rod — “I had 6 keeper bites each day, 4 on day 2, and never lost a bass. All the tournaments where I had good finishes were all that rod and 1/2- and 3/4-oz jigs. That rod has a parabolic-style bend that only goes like halfway. It feels like it’s going to be a stiff rod — you can feel every branch and rock or bass that ticks it — but when you set the hook the front half of the rod bends in a parabolic way. That puts the hook away — it puts it past the barb but doesn’t tear their mouth. It just puts it in there then keeps them pegged.”

> It’s really unusual for a major win to happen when a guy doesn’t catch a limit each day. He had 4 fish on day 2, a day he had “power issues on the boat. I lost the [Humminbird] 360…last 3 hours never got a bite. The back graph still had enough power to give me the exact heads-up orientation, but I had to run back and look at it then go to the front. Fishing against those guys, that just can’t happen.

> “90% of the fish I caught because of Lakemaster and [Humminbird] 360. It’s like when you’re fishing the bank, when you’re casting at structure — think how accurate you have to be to get a bite. When you’re offshore, you’re not really doing that. You’re throwing out and dragging, hoping to hit whatever it is. With 360, you’re casting to exact targets…making the perfect cast every single time. I’m lost when I don’t have it. The whole time I’m staring at that 360 making the most accurate cast.

> “After practice Kayla [his girlfriend] asked how I felt…said to her if the offshore thing goes down I feel like I can win. I knew that weather change on day 2 was going to be the game-changer for me. Can I make the adjustment in day 2 to survive. …was disappointed didn’t catch my 5th fish.

> “Something said to me, I think I’m gonna win this tournament. No one’s doing [what he’s doing], everyone was on the bank. Usually that’s me [and] someone else figures it out better. This time it was me. Just something different about this time.”

How Jamie Hartman won the Cayuga Elite
How Seth Feider caught ’em at St. Clair
To Top
We use cookies to ensure that we give you the best experience on our website. If you continue to use this site we will assume that you are happy with it. Cookie settingsACCEPT
Privacy & Cookies Policy