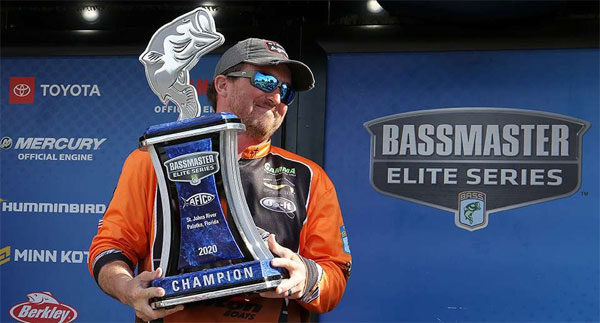 Brutal because it was cold (which = lockjaw FL bass), wind-shortened by a day, and still no eelgrass to speak of. But hey — Paul’s from CT and fishes all winter in just a T-shirt and boxers, so some FL cold is like no big deal.

Here’s how it went down for him:

Bad practice and a blessing in disguise

> “Practice was tough. The 1st day I practiced the normal Lake George and the river thing, kind of what everybody does. I didn’t do much…maybe 4 bites that day.

> “The 2nd day I went back and tried some different stuff in the river…was not doing much. Then a blessing in disguise happened — I ended up running into a cypress knee and snapped the [Garmin] LiveScope transducer off the mount. …ran to Palatka to the service crew.

> “By the time we got it fixed, just 4-5 hours left in the day. So I launched there and went north. I wanted to look for shell beds on the main river, but I didn’t find much. Then I popped into a creek, nothing…kept going north.

> “…late in the day…pulled into Trout Creek, which ended up being the creek I ended up spending the majority of time in the tournament. I had 2 quick bites on a swim-jig, but they were only 2-lbers…didn’t think much of it.

> “[Last day of practice]…knowing heavy wind was in the forecast, I felt I really had to find fish toward Lake George because you can get there and wind’s not an issue. The other way [on the river] is wide and can get real rough. And 2-lbers aren’t really convincing….

> “I struck out big-time that day. I don’t think I caught a bass. So now I’m faced with dilemma: what to do. I was like, ‘All right I guess I’m going to fish for those 2-3 lbers, but is it too windy — I was still undecided getting ready to go on day 1.

> “The 1st day…noticed that the water level was really low. The wind had sucked the water out of the river so it was lower than normal at low tide. I knew I didn’t want to go to that area…[since he’d caught those fish on high tide] had to wait til it was higher.

> “I didn’t want to waste time there, get discouraged and then do something else.

> “I opted to look for new water til 11. Didn’t find anything. So I had from 11 til 4 [his check-in] to figure out how to catch the fish in this creek. It was a good size — you can’t fish it all in one day. So I started fishing, covering water — that was the key for me.

> “It had a lot of lily pads, some hyacinth mats, some rocks, but mostly pads. 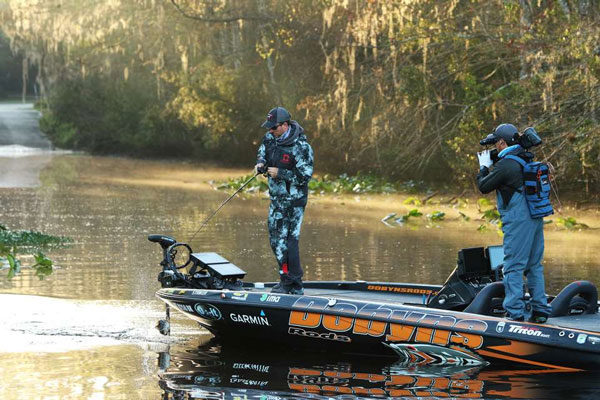 > “…was amazing…. You’d think that after a front like that you’d have to slow down in FL. That’s the consensus. But I made the swim-jig work that day [lily pads and stems]. 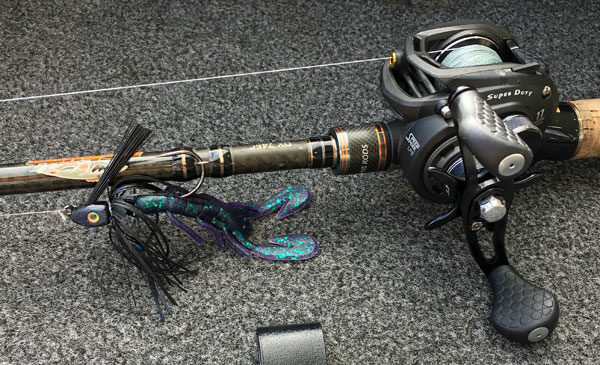 > “I started catching fish right off the bat. And as the water came up and the day got warmer, I started getting bigger fish. I lost a fish that was probably closer to 9 than to 8…would’ve been my personal best bass….” [He still had a limit of 20-08.]

> “[Day 3] I went into that creek and only caught 1 on the swim-jig. It was just dead. Here’s where things were meant to be — the Lord gives you the wisdom at the right time of what to do. …I was way out of it mentally — I thought I’d dug myself a hole.

> “If the boat was sitting in 10+’ of water…3-5′ was the flat stuff and 8-10′ was the steeper stuff. If the bank was sitting in 10′ and all of a sudden started to transition to a flatter bank, that intersection is where the fish would be.

> “The Garmin mapping was helpful. …areas with the bigger fish were transitions from a steeper bank to a slower-tapering bank, or when the deep water swung a little closer to the bank, like a little indent of deep water. The fish would pull up when the water would come up. I was able to eliminate stretches [with the] Lake Vu G3 mapping.

> “I got hints and clues as I went on. I felt like the Lord gave me the right wisdom at the right time, and even though it wasn’t pretty I got it done.”

> “I fished 1 swim-jig the whole tournament. That hook is so stout — it’s like a tuna hook.”

> Story of the lost day 1 hawg: “It was the most incredible bite — I could kinda see the bite but not the fish. I was swimming that jig through the lily pads and all of sudden there was this wall of water, like a shark almost…the water was so dark you couldn’t see the fish. Even my marshal said, ‘Oh boy that’s a big one.’ …came straight at me…barely hooked, could see the jig on the side of his face. So I couldn’t really control the fish…would rip the hook out. It went around the boat a couple times, and on the final run, it jumped, shook its head and the swim-jig went flying. I already had my weight…so it never really rattled me. I just kind of shook it off — it is what it is, I did the best I could do…. If I’d horsed it I would’ve lost it.”