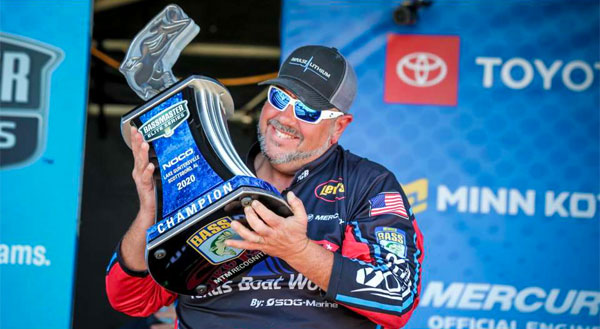 WTHeck just happened? Frank Talley had never had a top 10 in his 2 years on the Elites, and at Guntersville decided to fish where no one else was fishing, used a green pumpkin bladed jig to catch fish that were feeding on shad, and basically didn’t have much of a shot of winning being in 6th and 4 lbs out, then won by 2.25 lbs??? 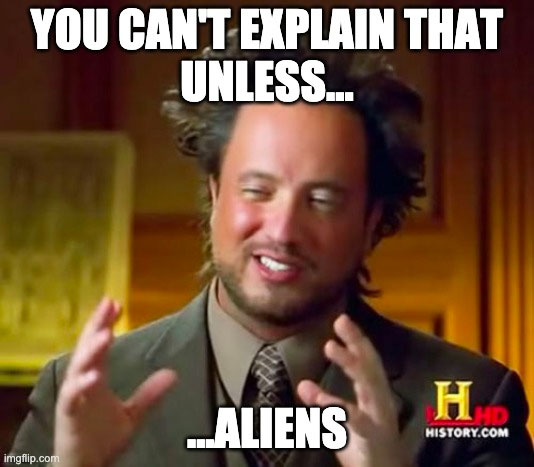 Yes that makes sense cuz this is the Elite Series, where guys routinely come from significantly behind to win. Not sure why, but it’s a fact Jack. Here’s how Frank won this deal:

> “I knew it was going to be a grind. At the end of Sept in the South — whether that’s AL, MS, TX, LA, all those southern states — it’s tough in Sept. For some reason it needs that 1st or 2nd week in Oct to turn around.

> “But we had unseasonably cooler weather for like a week and half prior to the tournament. When I left TX it…water temperature was 88 degrees, but when I got [to Gville] it was 71-72 degrees. So I knew the fish would fire, I just had to figure out where.

> “I practiced my butt off the first 2 days, and the 3rd day — with 2 hours left in practice — I had a couple bites up in the river. That was the only thing left…main river current. I caught 1 good one and a couple keepers, but that’s better than nothing. I caught 4 fish [in] practice combined.

Day 1 he stopped on the way upriver and caught a keeper and short with a Red Eye Shad, but then it was all upriver stuff:

> “…within 2 hours I had a limit, then I was culling out little by little…had 14 lbs in the fall. I thought, That’s decent.

> “The next morning I just committed to the river…just put my head down with that Thunder Cricket and went to town. I caught 16-something the 2nd day….

> “Day 3 I went up there, found a stretch higher up that had pond weed [duck weed] in it…leaves that lay over on the surface — a 1/2- to 3/4-mile stretch that was totally different than the eelgrass I was fishing. I went up there and threw that plopper frog — caught a 4.5 and 3.75 that put me into the mid-15s the 3rd day…6th place, 4 lbs behind.

> “Day 4 we had a fog delay and it was a full moon so you either got on them for the first 45 minutes of the morning or you had to wait til like noon for them to refire. For about an hour and half it was really good and then it shut off….

> “I basically had caught my [winning] weight and didn’t know it…8:30 in the morning. I told myself I needed 19 lbs to have a shot and over 20 to win, so I kept grinding. I was telling myself all day I needed 3 kicker bites but I got 2.

> “It was just a blessed day, and I never lost a fish all tournament that mattered. I even boat-flipped that 6-lber…17-lb fluoro, but I didn’t realize she was that big. It was foggy and I saw it was a good one but I thought was a 4. I boat-flipped it and went wild — like, I can’t believe I just did that! It got my adrenaline up more…I was excited.”

> “…main-river bank that ran straight with some overhanging trees that were not important, I’m just describing it to you. What I keyed in on…from the bank on the dirt, eelgrass grew. Up on the bank it was matted up, then slowly tapered down to about 2′ from the surface…15-20′ then a sheer dropoff into the channel.

> “I was positioning the boat to cast parallel to that eelgrass wall. I’d run that Thunder Cricket down that vertical wall. The boat was in 8-9′ and I’d cast parallel as far as I could…steady retrieve.

> “…when the eelgrass had an irregularity, come out a foot or 2 and make a point…current break and the fish would position on the backside of those little points.

> “Very rarely would I run the same water…about 40 miles of river…all the banks were the same. I only fished the right hand side of the river going up because I’m right-handed. I would rollcast and could keep it closer to the eelgrass. I didn’t want to cast left-handed the whole day, which I can but….”

> Day 4 spot: “…identical 3/4- to 1-mile stretch…looked steeper, but when you pulled up to it it had the exact same qualities — slow-tapering eelgrass…drop off to the channel….”

> “I tried buzzbaits on the edge, I tried fishing the edge with a 1.5 squarebill…were a lot of 2-3″ threadfin shad swimming in and out of the eelgrass. More importantly you’d get groups of 8-10 gizzard shad 6-7″ long that would swim in a little school. I think the bigger fish keyed in on the gizzard shad. Every fish caught down in the lake [by other competitors] were skinny, but all of these fish were like butterballs. I had 2 fish that were 2.5 lbs and weren’t even 15” I had to throw back.

> “That Thunder Cricket mimicked the bigger shad better. The water was super-clear [4+ feet viz]. Some perch [bluegill] were there too — they were keying in on gizzard shad and shad, but I felt like they wouldn’t pass up a perch/bluegill.

> “I think green-pumpkin works best in clear water. [He also threw that gp Thunder Cricket in all those northern tourneys.] I also threw white but couldn’t get them to bite…followers but they’d never commit.

> “…straight retrieve it [with the current], and when it would touch a little eelgrass I’d twitch it — not snap it, just a quick ‘pop pop’ to free it…[then] continue to reel and half the time that’s when they’d eat it.” 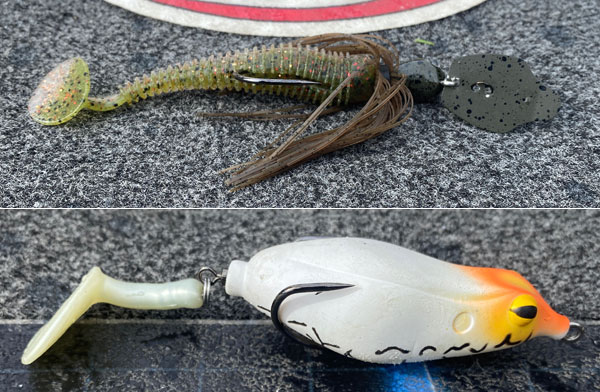 > “I fished the frog perpendicular to the current…fire at 22-degree angle [across the current] so the presentation would look natural….

> “I did not try a regular frog. I wanted something that made noise because the current was ripping through that pond weed…couldn’t run a buzzbait through it, couldn’t throw a Whopper Plopper, they would snag up. I wanted that noise but weedless….

> “I practiced for 14 hours a day and fished 8-hour tournament days, and they were releasing 43-45K cu ft/second over there..extremely high. The current was ripping and I fished against it all day long — I was on 8 to stand still and 10 to move forward. I was using Impulse Lithium batteries and had full power the whole time. That’s worth mentioning because one guy’s lead-cell batteries crapped out after 4 hours of doing it.”

> He wanted to shout-out the 5/0 Owner hook on the Thunder Cricket.