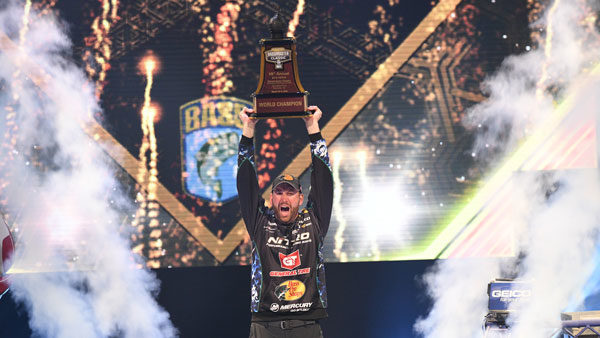 You might think Ott won it because he’s a local. But as we all know, local knowledge in top-level tourneys is as much a curse as a blessing. Ott knew that, and intentionally tried to avoid the “too many spots” syndrome while also being helped by highly abnormal conditions. Here’s what he did.

> “A lot of places I was used to fishing with 2-3′ on them were [practically dry]. Back in the pockets there was hardly anything for the fish to be on. A lot of guys got dialed into that — you could go into any pocket and catch a few.

> “We all felt with the water warming and coming back up, there’d be more fish in these pockets. But it was actually the opposite — the water came up and the fish scattered.

> “Shallow offshore stuff is what I typically fish there this time of year. The reason is…fished a lot of tournaments there 8-12 yrs ago…80 or 100 boats and everyone knew all the good banks. So if you fished the bank, you’d not do very well. I needed to be fishing stuff offshore where everyone and their brother was not fishing it.

> “What I focused on was a cast or more off the bank. Very subtle stuff — most doesn’t look like much even as good as Lakemaster is. I had 20 or 30 really good ones to fish, 60 to 70 that had potential. I could run from spot to spot with confidence that not many other people would be fishing them. A lot of them are 1-fish deals….

> “Cover didn’t matter. Stump, rock, shale — it wasn’t a deal where you had to have [a certain] cover to get bit.

> “Also…the current — the fish were not in the heavy, blowing current. You could get bit in places that were protected, and also places that had a little bit of back current.

> “The pattern had to do with depth and how much current…none to minimal [current] was what you were looking for.”

Lots of guys get spun out in local tournaments by knowing too much:

> “Really our conditions helped me with that. We had such abnormal conditions — it wasn’t anything I’d ever seen before. …I’d never been out there with that much current flowing.

> “The first time I put my boat in in practice, I just put the trolling motor down…and fished, instead of running from spot to spot. I went to areas I knew were good but fished everything. When I got a bite here and a bite there, then I saw the similarities and tried to build a pattern from there based on the current conditions. Once I had a pattern, I knew places that matched up with it….”

> His plan “worked perfectly the first day. That’s the only day that worked exactly how I wanted it to. I ran a bunch of water and caught a keeper smallmouth, a 6-lber a little after 10…[then] 2 keeper [18″minimum] smallmouths…3:00 caught my last good fish, culled with a largemouth close to 4.”

The place he caught the 2 smallmouths he fished 4 times that day — skunked the 1st time, 2 shorts the 2nd time, zip the 3rd time and those 2 big smallies the 4th time.

> Day 2 — “The morning started off great. I had an area I felt a lot of confidence in…several key spots to hit. I caught a 3.75 on the lipless, then on another point I caught a 1.5…. I started running some of the same stuff, some new stuff, and caught another keeper…then hit a brick wall.

> “The place I caught 2 keeper smallmouths the day before…the north wind hurt my main area [south wind on day 1]…. So I left…kept bouncing around…. I went back into Turkey Creek — when I’m struggling on a tough day, I can always get one there or a limit, whatever I need to do. I was able to [finish his limit] off some docks, but I never got a decent bite in there. …bladed jig off shallow docks….

> “I was mad because I had such a big day the first day and felt like I had shot myself in the foot.

> “Day 3 started off fairly well…was going to go further down the lake…lot of places hadn’t even fished yet. …caught some short fish [and a couple keepers], then went down further — that’s where the tip from Keith Poche kicked in. He told me [the day before] about a dock he’d caught nice fish on and lost a nice fish. I figured I’d go there and give it 5-10 minutes, and see what happens.

> “Once I caught that one I thought I might have a legit shot if could cull another time or two. …I kept working around there and picked up another….

> “At 2:00 I worked my way back up the lake. I fished some marina docks with no success. The last set of docks I fished was at around 2:40 — [he was near his] favorite point on the lake this time of year, a place I knew I could get bit. The wind started kicking up a little bit out of the south…a ripple [on the water]…. I knew I had to go over there.” 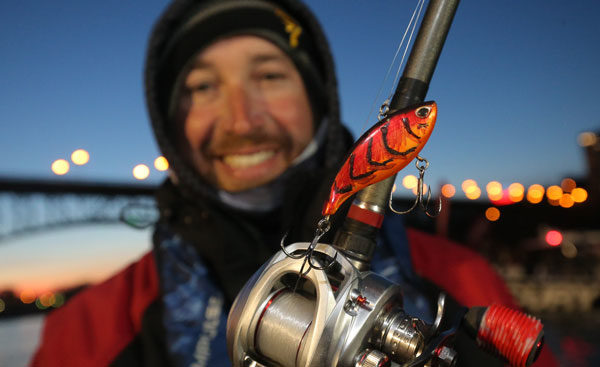 > His main bait was a Storm Arashi Vibe lipless crank. Color was custom — “the factory color was rusty craw, but I took an orange, black and red Sharpie and colored the belly orange, the side and topside red, and made the back and crawdad stripes black. I caught 4 the first day, 2 the second day and 1 the third day on it.” 7′ 6″ MH Bass Pro Shops cranking stick, Johnny Morris Platinum Reel (6.8), 17-lb BPS XPS fluoro. Hooks changed to #2 VMC Hybrid trebles.

> Why color the bait: “I like a reddish-orange lipless crank this time of year, especially in dirty water like we had. Storm has a red craw [color], but it’s really vibrant red. I wanted something that had more orange on it. I still wanted orange and red, but didn’t want it super-vibrant red. The water was dirty but it was sunny out so I wanted something that wasn’t quite as in your face….

> “I’d sit on points and bars — sometimes as shallow as 3-3.5′, sometimes as deep as 7′ — and make casts to where you could barely see the bottom, like 1.5′. I’d hold the rod up and try to fish the bait slowly. It was almost like fishing grass…contact with the bottom and pop it off, a slow to moderate retrieve.”

> His 5th fish (4-lber) on day 1 was a Rapala DT-4 (dark brown crawdad) with #4 VMC Hybrid short shank trebles. “I picked up the rod with the Arashi Vibe on it, set it back down, and dug the DT-4 out of the rod box…that spot has a lot of real shallow stumps on it, and I felt like I’d get hung before I’d get bit on the lipless.” Fished it on a 7′ MH BPS cranking stick, same reel, 14-b XPS fluoro.

> His other bait was 3/8-oz bladed jig (chart/white) with a white minnow-style trailer. Same rod as for the Arashi, BPS CarbonLite Reel (7.5), 17-lb XPS fluoro. “Those fish were on docks. Some were shallow pole docks in the backs of creeks, and the ones on the final day were outside the wall of a marina on the main lake. The fish were on the outside edges. Slow, steady retrieve.”

> “2 things really helped me, both with my Humminbird units. One was Lakemaster mapping. I know this lake like the back of my hand, but it’d been 8-10 years since I fished down there much, and having that Lakemaster map…being able to get right back on those place I fished a long time ago was big. And the actual fishing part with the 360 — I could see how the rock was running out, so I could make targeted casts with that lipless and bounce it across the bottom.”

How Brian Latimer won the Seminole FLW
ALL the 2019 TN River Classic baits!
To Top
We use cookies to ensure that we give you the best experience on our website. If you continue to use this site we will assume that you are happy with it. Cookie settingsACCEPT
Privacy & Cookies Policy