Gitcha baits and patterns on, here you go! 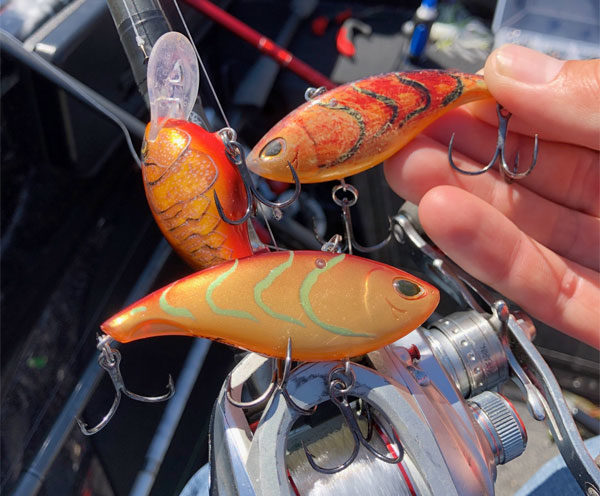 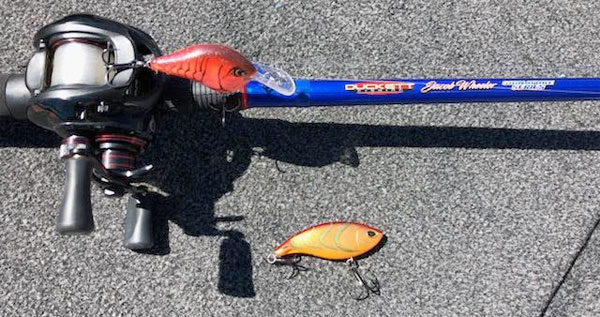 Jacob fished 3 baits — a Storm Arashi Vibe (rusty craw), an unnamed squarebill (red craw), and a Rapala DT-6 (Ike’s demon). The Vibe was for pea gravel points and “sometimes in creeks” in 1-3′. The squarebill was fished on the flatter banks in 2-4′. And the DT-6 was for bluffs and steeper banks.

Jesse’s 2 main baits were crank. One was a Jackall Bling 55 (crawfish) fished “around any shoreline cover — rocks, logs, stumps, laydowns” in 2-5′. The second was a flat-sided crank (pictured) fished on shallow points with gravel or chunk rock in 5-7′. 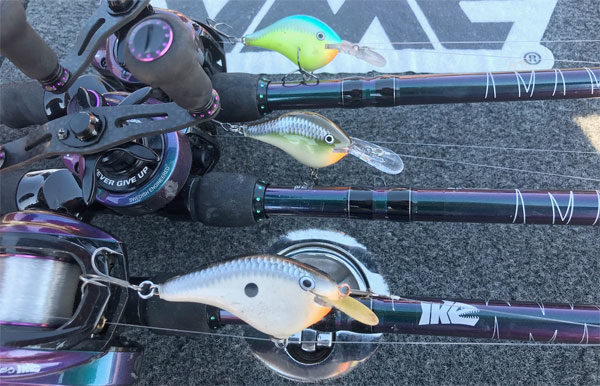 > “80% of my fish came cranking. I fished 2 cranks. A Rapala DT-6 was the main bait. The first 2 days I fished ‘Caribbean shad,’ which is a faded chart/blue. The last day the water cleared up a little, like a couple inches, and they wouldn’t hit that [color] as good so I switched to the ‘smash’ color — more of a straight shad color.

> “I was fishing what I call ‘natural rock’…flat rock in 4-6’. Off the bank — the really good flat rock wasn’t right on the bank. Veins of it would run out off the bank. Flatter red clay banks…were way better than the banks where you could see it on the bank. [Bank] stuff got more pressure.

> “The other crank is a bait Rapala discontinued [this year] that Ott modifies. It’s a DT Flat 3…. Ott replaces the bill with a circuit-board bill in the nose at a different angle, and repositions the line tie so it comes out of the nose [in the pic above, the Ott bait is at the bottom]. …fished the shallow stuff…gravel bars on the main lake. In the tournament I ended up catching some largemouth there. I fished it in a color called ‘penguin,’ an Ike’s Custom Ink pattern — like a shad pattern with darker back on it. It caught some every day for me.”

> “I also caught a few on a 1/2-oz chart/white Molix Water Slash spinnerbait, double COs, 1 silver, 1 gold, with a chart Berkley Power Grub. I fished it when I got to a laydown near a bank…. 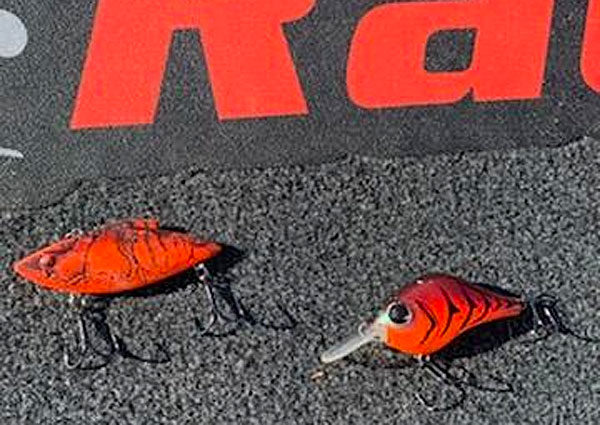 > “I had 2 main baits. One was a 1/2-oz original Rat-L-Trap (red crawfish). The key with that bait is to change out the hooks…Owner ST 56, #4s. This time of year that’s my preferred hook of mine. That’s a short-shank hook I feel really hooks them well early, when they’re really eating the bait well.

> “That’s a classic color and it’s one of the first color ‘Traps I ever used as a child. On the California Delta [where he grew up], that particular color is a staple. I have a lot of confidence in it when the water’s off-colored like that in the springtime, when crawfish are on the menu.

> “I was fishing it on very flat, subtle transition points on the main river leading into spawning bays, in Loudon.

> “My 2nd bait was a Bill Lewis MR-6 (strawberry craw, also with the hooks changed to the Owners)…fished in the same type of places. I had a couple other areas that had more depth on them….

> What happened on day 3: “I don’t think much changed. I think I overly-pressured my areas — I caught everything I could on day 2 to get into the position I was in [to maybe win it]. I knew I’d have to fish new areas. It just never happened — the fish never showed up man.

> “The fish were sliding up to stage, so if those fish don’t make that move, you don’t catch them.”

> “Caught the big bag the final day all on a 3/8-oz hand-tied brown jig with an X-Zone Muscle Back Craw trailer (gp).

> “I ran pockets with the bladed jig, but caught all the jig fish on main-river bluffs.” 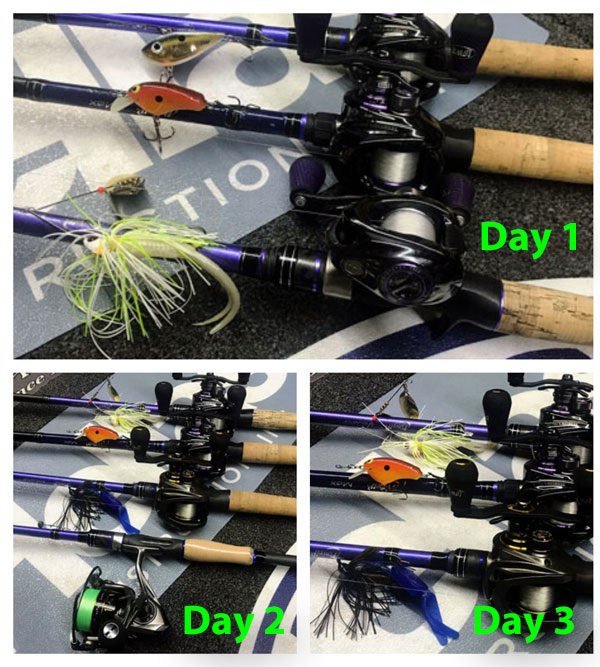 Dean fished a variety of crankbaits — squarebills, flat-sides, medium-runners — all in shad patterns (chart/blue and TN shad). He fished shad colors to be different than what the other guys were throwing, and because his fish were keying on shad more than crawdads.

Areas were “little drains, little rock stuff that comes out, mainly that had access to deeper water, 8-10’…rock, and if rock and wood were mixed in it was really good.” Areas were no deeper than 6′. 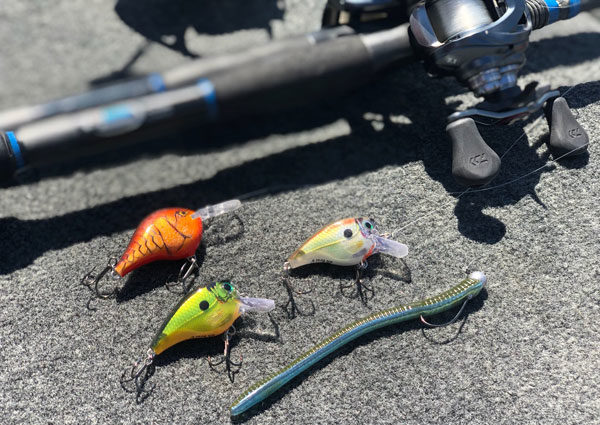 > “Fished the crankbaits on shallow offshore hard spots in 2-4′ and riprap banks. The shakey head was for a underwater culvert I found day 2 on my Humminbird 360.” 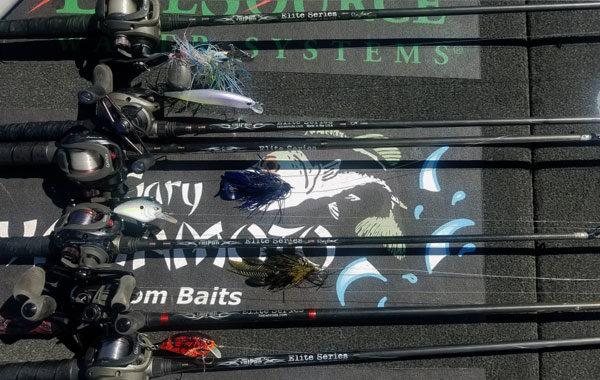 > Duo Realis 110 jerkbait — “slowly REELED along the bottom on gravel bars. Tried ripping, but the fish reacted better to it on a straight wind.” 12-lb Yamamoto Sugoi fluoro.

> “All on Loudon, lower lake, mostly main channel or just inside a creek/pocket.” 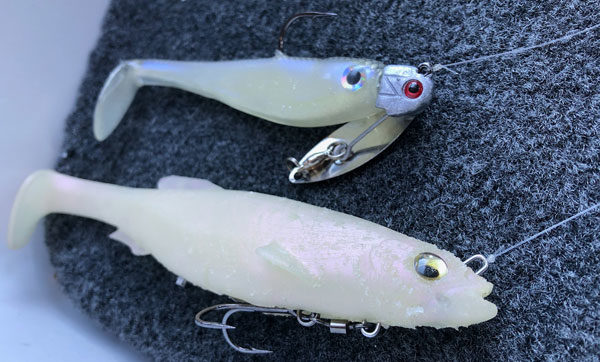 > 6″ Megabass Magdraft swimbait (albino, bottom). “Fished it on 15-lb Seaguar InvizX and a 7′ 2″ Megabass Orochi XX Perfect Pitch Rod. I caught 75% of my weight on this, throwing it on shallow 20-yard stretches of rock transitions (bluff to chunk rock, or chunk to gravel). Had to have current or wind, 2-6′.

> “For the bluffier banks, the 3/8-oz Santone Z-Spin Head with a 5″ hollow-belly killed it, especially the smallmouth. I’d cast it parallel to the bluffs and let it flutter AGAINST the current. Same rod and line combo.”

> “I fished mostly docks in 3′ — didn’t matter if they where on the main river or in a pocket. Used my new C Maps to help me find the ones with the right depth.

> “The bait I caught most of them on was a Berkley Fritts Side crankbait with #4 Berkley Fusion19 hooks.” Abu Ike cranking rod, Abu Revo Gen 4 reel, 12-lb Trilene 100% fluoro.

> “Most of my fish came on a PH Custom Tiny Hunter squarebill in Guntersville craw. I caught the big fish the last day on a Davis Baits Xwire Spinnerbait.

> “Also caught some on a 3/8-oz Dirty Jigs Matt Herren Flippin’ Jig in Canterbury craw color. I was using a Reaction Innovations Sweet Beaver as the trailer in California 420 color.

> “I used a 3/8-oz white Bass Pro-brand Chatterbait with a white swimbait trailer. Fished it around milfoil and rocky banks, 4′ or less.” 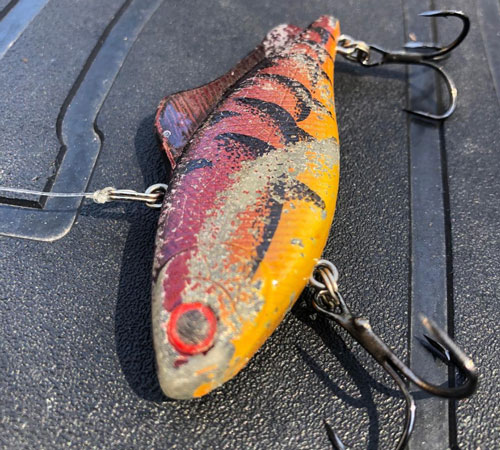 > “My main bait was a Lucky Craft LV 100 (spring craw). I was fishing shallow rock swings and the backs of creeks.

> “Fished docks in back of pockets all week — 2-5′ with pea gravel under docks.

> “I fished a Berkley Wild Thang crankbait (special craw) around rock points, transitions and current breaks in 6′ or less.

> “The other bait I used was a Berkley Fritts Side — it’ll be out this summer.” 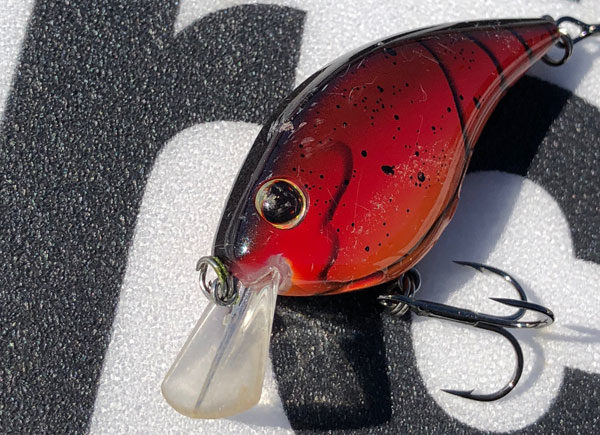 Chris fished “rocks and docks all up and down the river” with a Luck E Strike RC Series 3 crankbait. 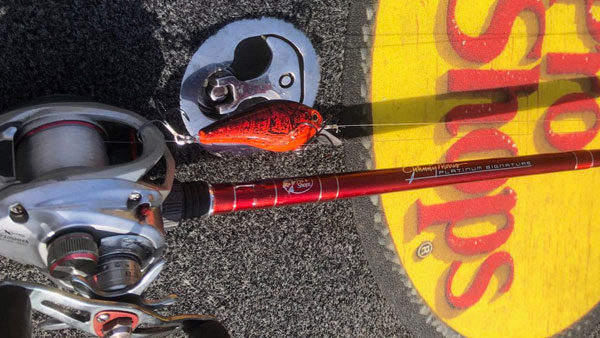 > “I was throwing a 1/2-oz white bladed jig and a 1/2-oz white/chart double CO spinnerbait from TrueSouth Custom Lures. Both were fished around docks at the lower end of Loudoun.”

> “I was targeting isolated stumps and gravel on main-river points and pockets.”

> “Working chunk rock banks parallel in 3-7′. Used the crankbait whenever there was exclusively rock, and when I would come to a laydown or dock I would throw the spinnerbait.”

> “I was throwing a 3/4-oz Cumberland Pro Lure Spinnerbait (coleslaw) with a single gold CO blade and a Berkley Power Swimmer trailer (chart/white), and was also cranking a Luhr Jensen Speed Trap in red craw as well as a Berkley Bad Shad in hot mustard.”

> “My main bait was a Berkley Fritts Side around rock on the main lake and in creeks, 3-5′.” 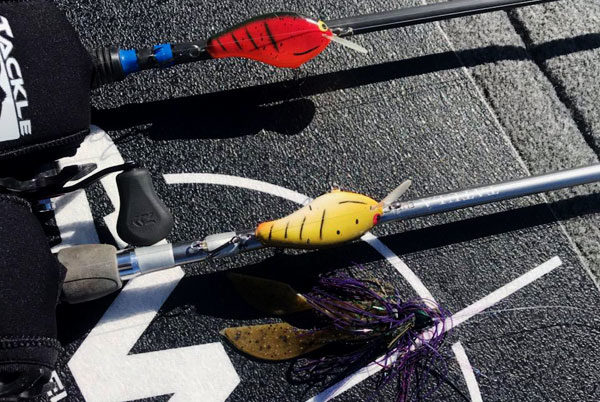 > “I used a PH Skinny in Guntersville craw and a Lucky Craft 1.5 in the same color. The water warming up turned it into a squarebill deal. I used a prototype Alpha Angler rod called the ‘Wimp Crank’ that’s really good for whipping around light crankbaits, and Seth Feider’s signature Daiwa jerkbait rod he gave to me — it’s good for crankbaits.”

> “I also used my signature flipping jig, the Battle Flip (1/2-oz gp) from Beast Coast, to flip laydowns. It won’t get hung up.” Trailer was a Zoom Super Chunk (gp/purple), and he fished the jig on an Alpha Angler Hitter Rod.

> “I mainly focused on rock — rock transitions, little points, unique rock in a pocket, chunk rock, rock that was different…the worst thing to fish was wood. I chose to fish Tellico because it was a total gamble.” 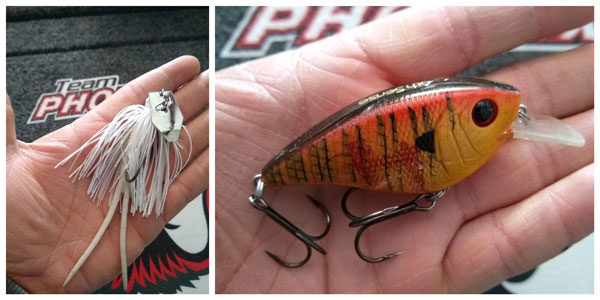 > “I used a 1/2-oz white vibrating jig primarily around docks.” 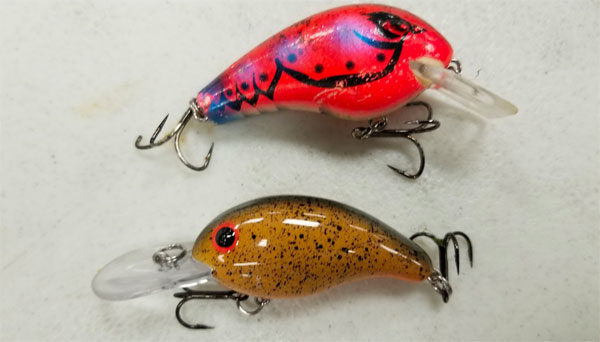 > “In the extremely dirty water I was throwing a BOOYAH Flex 2 squarebill (ruby craw) around shallow rock and wood. 15-lb fluoro.

> “In the cleaner water I was throwing a Bandit 200 in brown craw/orange belly. 12-lb fluoro.

[Couldn’t get with him but he posted a poc of a Lucky Craft 1.5 on his Instagram that he said he fished around docks and rocks at the Classic. Color looks like TO Craw but with a yellow belly.]

> Duo Realis 68 Vibration (red tiger). “I was hopping it on bluff walls, points going into pockets and even caught some fish in pockets on it. The stock hooks are good, but I always use my [Gamakatsu] hooks,” #3 this time.

> “Not that I caught a bunch of keepers…I had several largemouths and smallmouths 1/16″ to 1/2” short both days.

> “My main bait was the Z-Man Fattyz (gp) TX-rigged with a 1/8-oz tungsten weight. I was fishing crowded areas so I thought I could go behind guys who were cranking and catch them on something different. …pockets off the river, chunk rock halfway to the back, 2-10′ deep.

> “I used a Bill Lewis MR-6 crankbait to cover water and search.” 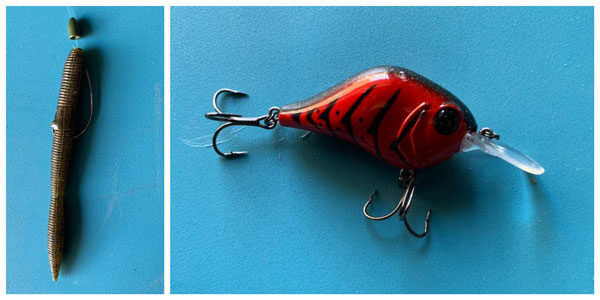