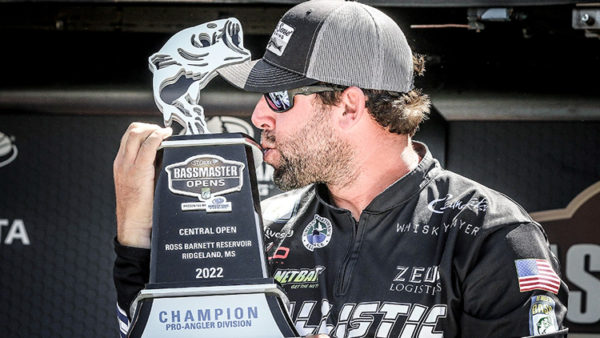 Lee Livesay decided to fish the Central Opens for 1 reason: to qualify for the Classic. Guess he did that! Here’s how it went down, at a lake he’d only been to 1 time before.

> “My plan was to stay in the main area…east side of the main lake. I felt like if I figured out that spot I have a shot to win. I kept it pretty simple – I was not up the river, I was not chasing shad….

> “I didn’t want to fish the bank. I figured most of them had already spawned, and we were inbetween moons. I wanted to stay out, but not on ledges. Real shallow – the last vegetation/shell-bed points where post-spawners were pulling out and maybe a couple pre-spawners. I was going after bigger females.

> “I found 5 spots in that area. I knew it would get a ton of pressure – I found 5 spots where I could put my Raptors down and not move. I could sit there and fan-cast 360 degrees around my boat and I wouldn’t freak out. I thought I could have 12-22 lbs [wide range = not sure]…knew there’d be enough pressure that I wouldn’t be able to move any.”

> Day 1: “I was boat 60. I pulled in there and [another competitor] was already on that other spot…already about 20 boats on that stretch. But the spot where I got my biggest bite, a 4.5-lber, [was open so he set down there]. Darold Gleason pulled up and asked could fish with me, I said yeah.

> “[Lee caught 3 keepers on a Carolina-rigged lizard], then it slowed down. The lake had dropped 5-6 inches over the last day. I looked behind me and saw a little group of dollar pads [on the other side of the drain] I hadn’t seen before…water got low enough.

> “I threw a Carolina-rigged lizard and 10 casts later caught a big one, then 15 casts later I caught another, then another big one. I had 20 lbs….

> “Every fish came on a NetBait junebug lizard. The water was really muddy.”

> Day 2, after the lake went back up again: “I was boat 166. I thought I’d have to fight someone when I got there. I pull in there, Gleason is in his spot, and another angler is in there who saw me fishing. I pulled up…wanting my spot back and he gave it to me….

> “…caught 1 small keeper [on the Carolina rig] out where those big ones were, then I threw back…inside the dollar pads. I caught 3 keepers…so I had 4 keepers. I fished all day in there, but it didn’t go down. I saw guys catch some good ones around me, but no one had a limit far as I could see.

> “About 1:00 I thought I better catch a keeper – could go a long ways for me. I picked up my Raptors for the first time in 2 days and went straight in towards the bank – right into the bay I was fishing outside of. About 3/4 of the way to the back, I picked up a Snag Proof frog and caught a small keeper. That was #5.

> “Day 3 I was boat #1. I felt my fish had left, but I still wanted to give them a chance. In my head I had to catch 2 big ones there for a shot to win because I didn’t think I could catch a big one on the bank. …nothing, not even small keepers.

> “I told myself I’d leave at 10:00. I fished for 15 minutes and thought, I gotta go throw a frog where I caught one the 2nd day. I catch a keeper right off the bat. After 10 minutes there froggin’ I was like, Now I need the big ones to bite out there in my drain. [He tried it but] nothing.

> “Time to move around…. My next little sweet spot wasn’t far – a little point of hydrilla, peppergrass and a stump with some shells around it. I catch a 4-something, and 4 casts later I hook a great big one but it gets me in the stump and breaks me off.

That’s what he did for most of the rest of the day – junk-fished shallow with a swim-jig, a frog and flipping. So it was 2 days of Carolina rigging, and a day of mostly junk-fishing. 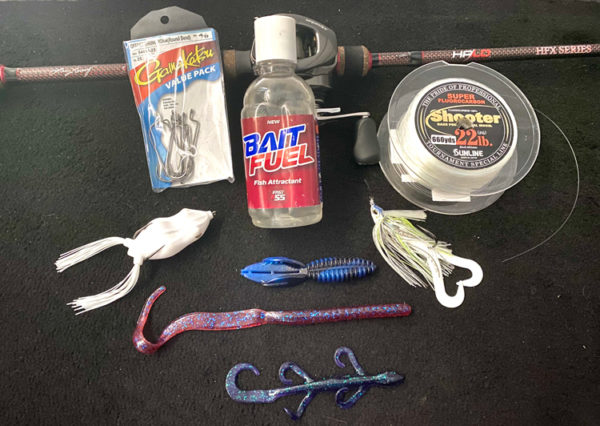 > BaitFuel scent on all the soft plastics.

> 22-lb Sunline Shooter fluoro for all baits but the frog.

> 7′ 3″ MH Halo HFX Lee Livesay Signature Rod (new) for all baits: “That’s like my bread and butter. It’s got my signature on it – I flip a jig with it, swim a jig, throw a Chatterbait, throw spinnerbaits on it, frog with it, football-head jigs, big worms…it’s just a versatile rod.”

> “Not so much in tournament because I already had everything done. Here’s what I did.

> “A lot of guys had to idle over to that bank – it was a 15-20 minute idle from the boat lane. I knew I was going to fish over there, so I took time each [practice] day to graph with my Humminbird Down and Side Imaging, and map. I found if I ran drains, stumps grew on the edges and no trees were right in the middle of those drains…cut a lot of time idling. I used my Side Imaging to see the stumps beforehand and used Lakemaster maps to run the drains in and out. That was huge for me right there.

> “I used 360 and Mega Live in practice…would use Mega Live to find the most outside edge of the hard edge of dollar pads. A lot of it was so muddy you couldn’t see them.

> “I’d get as far as out as I could, and go in til I could see the edge with my Live – like 100′. Then I’d put my Raptors down and look at them with the 360…would show me the exact edges…sweet spot, a little drain with a point on it, where the pads ended, a little hydrilla, a little patch of peppergrass, and a little bitty shell bed. You couldn’t see it unless you had 360 on.

> “You could literally see the vegetation changes – it was huge for me. I had 5 little spots, and every spot you could turn 360 on and see the differences other than just pads.”

> Minn Kota Raptors – “Without them I would not have caught those fish. I could sit there, not move and be quiet.”

> “It was hard to see the pads in there. I wear WaterLand fishing optics – it’s a 6th Sense sister company. They were huge for seeing that outside edge of vegetation that was a little underwater when the water was high….

> Bait Fuel – “I used it and caught fish around people who were not using it. I used it on all my plastics.”

How Ott DeFoe won Heavy Hitters on Palestine, TX
How Jesse Wiggins won the Lake of the Ozarks BPT