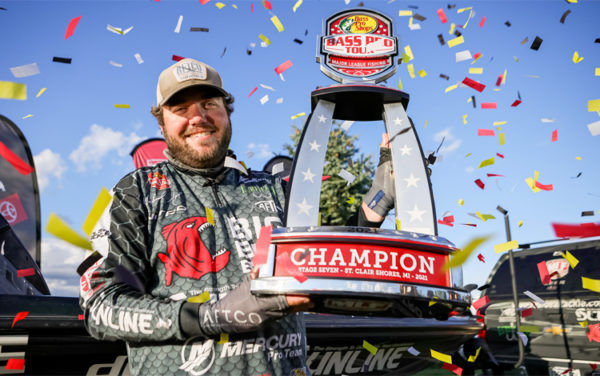 Michael Neal has been a regular “up there” dude, but this year was different. First he won the MLF Pro Circuit AOY, and then he won his 1st Bass Pro Tour event. Here’s how he did it.

> “I didn’t really have anything set, whether l was gonna largemouth fish or smallmouth fish. My main goal was to get into the top 5 in points – I was in 6th going into it. You always want to do as well as you can, and the best I could do was crack the top 5. I didn’t have a shot to win [AOY], so I just wanted to finish as high as I could.

> “The 1st day [of practice] I found absolutely nothing. I knew I could go out and fish around in St Clair with a big group and probably catch enough to make the cut, but I didn’t find anything that excited me at all. I spent half the day largemouth fishing – I didn’t figure that out at all, and I was tired of getting beat up by waves.”

> “Day 2 we were supposed to get lot of wind too, so I put in…the Detroit River…. I’d always heard that the fish migrate fish to the mouth of the Detroit River in the fall, so I went down there…wound up stopping on an area…bunch of birds around, seagulls and cormorants. It was just a big grass flat.

> “I started drifting with the wind and made it 200 yards when I doubled up on a crankbait. So I knew a lot of fish were in that area. It was rough – I kept going….caught another one and started idling. The fish [he caught] were on ‘differences’ – the 2 were on a little depression, the other 1 was on a big rock.

> “…I was all in on that. I spent probably 45 minutes or so idling around, marking little differences – bare spots, high spots, low spots, anything different. Even though it was only 12′ deep, you could see them…knew a lot of fish were in that area.”

> “I never left that area. It was just a huge grass flat that went for miles. I idled around way away from [his main stretch] but I hardly ever saw anything different. That one area had a lot of differences…anything different, there was a group of fish there, and the bigger the area, the more fish were there.

> “…some sort of shad-type baitfish and perch. The fish were waiting for the bait to run by them…come up chasing occasionally.

> “I was staying on the trolling motor..could still go against the wind and current. I was going from spot to spot. I’d catch an occasional one between places…. 10-14′ at the deepest, most averaged 12′.”

> “…half and half between a crankbait and a dropshot. When it was calm, little to no wind…have to slow down and fish real light, like 7-lb line. If you had an active school, you could catch 4-5 on the moving bait, then slow down, dropshot and catch a couple more.”

> Crankbait: Mid-running crankbait (well-known crank in “perch”) with #2 Gamakatsu Aaron Martens G-Finesse Trebles (“I think that was a big deal – a bunch of the fish I caught just had 1 hook in them – I lost some but not that many”).

> “…reeled it steady at above-average speed – not burning it but not a normal cranking speed. Whenever I hit grass, I’d snap it out. But that bait was running above most everything [10-12′]. 75% of the time it would never touch anything.” 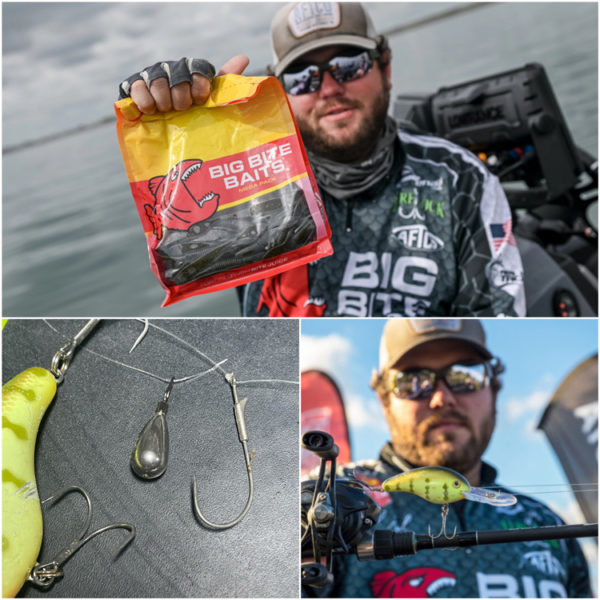 > Dropshot: 4.5″ Big Bite Baits Smallie Smasher (gp purple). “When it got real calm they didn’t like that bigger bait so I went to a smaller [3.5″ different baits] one…mixed in some other baits as well.” 1/0 Gamakatsu G-Finesse Light Wire Worm Hook with the tin keeper (“I’d thread the bait on it and leave it exposed – I wanted the point further back”), 3/8-oz Kovert Tungsten Teardrop Drop Shot Weight, 10-lb Sunline SX1 braid (green) to 7-lb Sunline Shooter fluoro, Daiwa Ballistic Reel (2500), 7′ 6″ M Denali Kovert Spinning Rod (no longer made).

> “It was weird. Sometimes you could throw it out there to a fish you’d see on forward facing sonar [and catch it], but most of the time you had to cast past what you’re trying to hit, then drag it super slow. Almost like they were skittish of a dropshot for whatever reason. If there was 1 fish, you probably weren’t going to catch it. If you saw 2-3 fish come together, 1 was fixing to bite it. The slower you could fish it, the better.”

> “I used Humminbird Side Imaging to find all the [bottom] differences. A key to me winning was doing that on day 2 – I knew I had a big enough lead to win the round, so I spent 2 hours further expanding the area. I found the main area I caught most of my fish on the final day.

> “I used Humminbird 360 to see where the places were in front of me, and used Garmin LiveScope….”

> “That [treble] hook. Aaron wasn’t able to be there and Aaron designed that.

> “If you look at the front hook on that plug [above] you’ll see that it’s missing one. I caught so many I wound up breaking one of ’em off and just kept throwing it [and landing fish].”