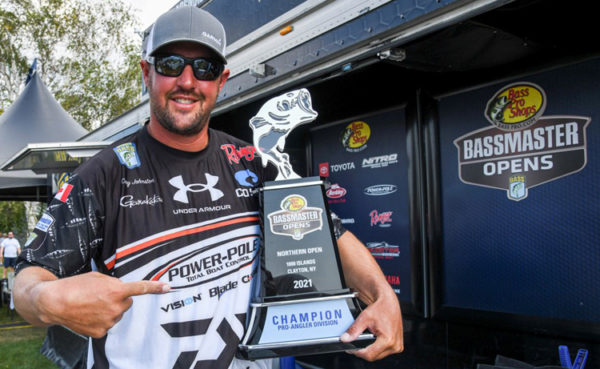 Cory wanted a win…bad. And he knows the St Lawrence River/Lake Ontario. He’s gotten close there, so would this tine be “it”? Yep – here’s how it went down.

> “I only spent about a day and a half out there, just because there’s a lot of poachers. I didn’t really want to be seen. It’s not even just my boat out there – if guys see boats out in the middle of nowhere, they’ll go out and check it.

> “So basically I just drove around and checked a few things. I saw a few fish on a few spots. Lots of spots I checked had no fish. I said, I’m just going to start in the river every day and hit spots [going toward the lake] til I come across them. I wasn’t going to drive by spots then run 10 minutes back to check it because I didn’t earlier.

> “I put probably 7 days in before the [recent] Toyota Series [tourney there]. I found new stuff and checked a bunch of old stuff. I know from experience where they’re going to be…have enough spots it was just a matter of time before I ran into them. It wasn’t like I was going to run out of spots or places to fish….

He said he caught ’em off different spots every day – the first 2 days he caught half his fish in the river, and the last day caught ’em all in the lake:

> “Every spot’s a little different. Some are rocks, some are breaks, some are little grass patches. Really no similarities. Some were in 15′, some were in 40′. I didn’t fish shallow all week. The shallowest was 15′ and the deepest was 42′.”

> “I caught every single bass I weighed in on a dropshot.”

About 75% of ’em were on the prototype SPRO mystery dropshot bait that he and his bro Chris designed and have been fishing:

> “It’s just a unique little bait that…combines everything we look for in a dropshot bait. Couple different lengths, 4″ is one [that’s the length he used]. It somewhat resembles some other baits, but we’ve kind of taken it and put our own little twist on it – we added a few things, took a few things away. To me it’s the perfect bait: small, compact, they just eat it.”

> “My other rod [same everything else] was a 6′ 10” L Daiwa BLX. It’s a little more sensitive, a little softer action. I just felt a lot of the times when you’re fighting bigger fish, the lighter action helps a bit.” 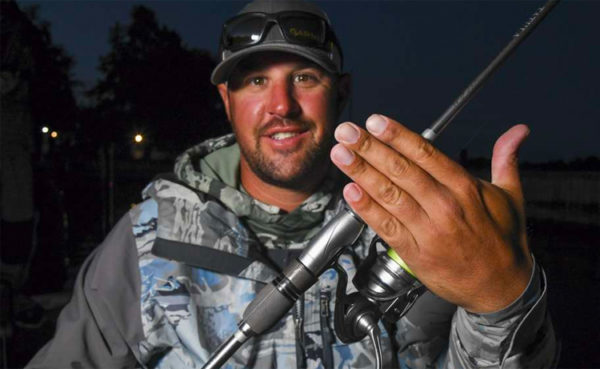 > “I wouldn’t say LiveScope was a huge deal for me. I definitely caught fish off it, but a lot of stuff was stuff I side-imaged in practice. I wasn’t necessarily seeing the fish, I was seeing the structure and casting to the structure.

> “I have 2 12-inch units on the console. The left unit is left side imaging, and the right is right side imaging. That allows me to have a bigger picture, so I can see things a little clearer.

> “On the bow I have 2 10-inch Garmin units, stacked. The front is LiveScope, the bottom one is mapping and 2D.”

> “The nice thing about Drift Paddles on the Poles is if you put half a paddle in the water, you slow down about a quarter. If you put them all the way down, you can slow the drift down anywhere from 50% to 80%.

> “…you can adjust it the way you want to, any angle you want to. So if you want to drift at an angle across a shoal, you can do that.”

> “I wanna give a shout out to Ranger and Mercury – because last month we had the Elite on the St Lawrence, running all the way form Massena, then the Toyota, running all the way from Massena again, and this last one. It was all big water. A lot of guys…their stuff’s busted up. I don’t have to worry about that. Just go out there and do your thing, and you know you’re getting back to weigh-in.”