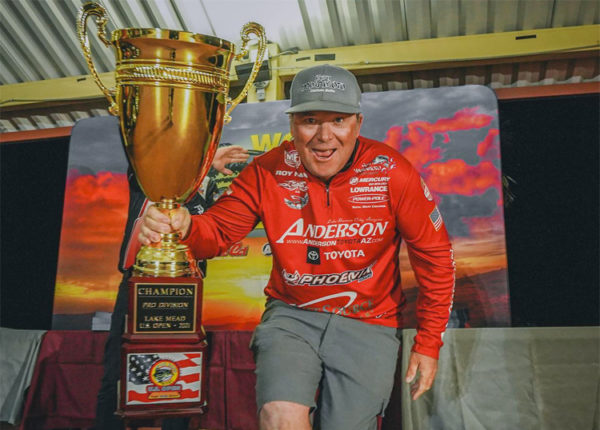 Roy lives in AZ, knows those “desert” western fisheries – which many bass-heads would consider tough – and won the US Open in 2015, so none of what he was facing at this year’s US Open was new. Except the ultra-low water, maybe a canceled day 1, and the fact that the good Lord set him up to fish this one in a new, uncomfortable way:

> “I had a real strong conviction of what I was going to do…coming into the event – where I was being led, where the Lord was kind of leading me. When I would sit quiet and visualize going into the tournament, I just had an overwhelming feeling of what to do.

> “Going into the practice and stuff, I wouldn’t allow myself to practice anywhere else. I didn’t want to get off on some tangent or something. I spent it pretty much in the same area learning the small little details of what the fish were doing. If I saw a little piece of structure, I ended up casting to it.

> “The end result was I fished in the Vegas Wash area basically exclusively. The first [practice] day I ran out in the lower basin within a couple miles of the Wash, but I quickly went right back.

> “This one was mentally very exhausting because I had to focus so hard – it was such a thin margin of error. If I didn’t catch 1 small keeper – I weighed 2 real tiny ones the 1st [competition] day and 3 the 2nd day – if I don’t catch one of those, I don’t win. It was just crazy.

> “I was in this area where you don’t get bit for 2-3 hours – I knew I could run out of there and run somewhere else and catch some fish. But I stayed there, stayed engaged, and kept casting…kept my head down.

> “I usually fish that thing running all over, covering water. I won that way before…running and gunning….”

> “Back in there where I was fishing there wasn’t a lot of grass. There’s a lot of grass in the lake this year – it looks really healthy – but back in there was hardly any grass. And with the water being so low there were no sticks in the water or anything. So it was all kind of rocks and contour changes.

> “All the fish I caught were in 5-15’…areas with contour changes. Some of the key spots were where points came out and dropped into a deeper break – like one came out to 12′ and dropped into 30, so they’d be on that 5-12′ stuff.

> “…any type of irregularities on a point, like individual big rocks. I made sure I hit the key little spots. I spent 3.5 days of practice…learned what cast to make. The key was to know what the angle of the cast was…got very detailed. To me, that’s what it took to pull a win out of that area – it was terrible fishing there.

Reminder that the US Open is a shared-weight deal:

> “It’s important to be able to use your ‘triple A’ [co-angler] and rely on them to get you extra fish. We’d pull up onto something and I’d tell him…’the point comes out a ways,’ whatever it might be, to give them a visual…hoping he can utilize that and get us some extra fish.”

> “All 4 of the big ones came on a jig a buddy of mine named Chris Kinley [also lives in AZ] makes. We designed the jig together. He tells everyone it’s his jig and I tell everyone it’s mine, so we just call it ‘My Jig.’ [Sounds like it will be sold at some point.]

> “It’s real compact…like a finesse jig but you can use it with heavy line. It has a little beefier hook. I used 16-lb Yamamoto Sugoi…the jig was 3/8-oz, gp-ish and I had a Yamamoto Psycho Dad, gp/red flake. That trailer is kind of medium-sized and has a little air pocket in the body so the overall presentation was a pretty good size. Kind of power-finesse.

> “Overall the fall of it was really, really slow. Get it down there and just creep it around, bring it over a rock….” 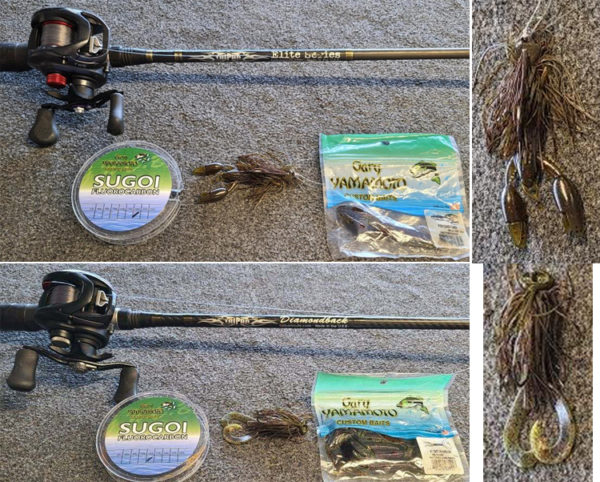 He also fished a variety of other baits, including a dropshot, but the main one of those deals was a Pepper Jigs Casting Jig (with a custom-made gp skirt) – which he says is a “light football jig” – with 4″ Yamamoto Double Tail (watermelon/red flake). He fished that on a prototype 735 Taipan Diamondback Rod and 12-lb Sugoi fluoro.

His co-anglers mainly caught ’em on a dropshot.

> “Electronics were very important. I use Lowrance electronics, and probably the most important thing was being able to use forward-facing sonar – Active Target.

> “I wasn’t looking at fish, I was looking at the approach, especially in practice. Going down the bank…you could see [a point] and could see were you needed to start pulling the boat out…visualize it, and hold back and be able to cast to the key spot.

> “It’s just like using 2D down imagery – this is just looking forward at the contours. Being able to see ahead was vital.”

> “I don’t think that I could do any of this – fish professionally – without God in my life. He gives me the peace to see things through when times get tough. My family and I have never starved, but we have gone through tough times financially. But with our faith intact, we can see it through.”