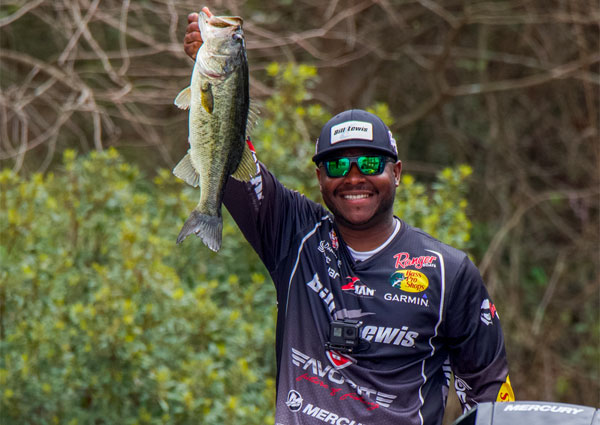 Sorta? Mark Daniels Jr HAMMERED the Fork feeshes, but Fork local Jeff Sprague almost caught him. then MDJ looked like he was a-gonna win the whole deal at Athens afore he got passed by Ott and Alton Jones Jr. Anyhow, wanted to get some deets from MDJ about Fork, here you go.

Seemed like everyone was pretty much doing the same thing on Fork, so was it just your area or your baits or both?

> “A combination of both. Everyone was more or less targeting spawning and strongly pre-spawn fish. I knew I couldn’t rely on sight-fishing for a long period of time. [After you catch the ones you can see] then you have to just fish…. So first I’d pick up up a couple spawners, then I’d fish for [spawners] without visually seeing them.

> “My 2 favorite ways to go about that were blind-flipping and covering water with a floating worm.

> “But…I obviously found a magical spot. I caught all my weight, less 3 fish, in a 40-yard stretch…a very magical place. It was a dredged-out little pond-type area for the community, basically in people’s backyards like they wanted lake access but didn’t really have lakefront access.

> “The fish were literally swimming in there as I was fishing. I was able to pluck them off as they swam in, plus [some] spawners were already on beds.”

Can you describe it?

> “It had a clay bottom and some coontail growing in there. They were spawning on the clean clay bottom among the coontail patches. It was very shallow, like 0-2′.”

Did it have a ditch or something that was funneling the bass coming in?

> “Yes, it had a very subtle canal-type section that might have 10-12 yards long — a very small area…tiny. I was catching them in the ditch, on the edges of the ditch and the edges of this bowl-shaped area.

> “In my mind what they’d do was come in off that ditch and cruise around there, aimlessly looking for partners. Like going to a bar — who all’s in there?”

If it was that shallow, why weren’t the fish running scared with you in there?

> “3 reasons. …trying to be as quiet as I possibly could…always utilizing Power-Poles [8′ Blades]. That Garmin Force trolling motor is so quiet…on low and constantly Power-Poling down. I was minimizing trolling motor noise and chopping up grass. I made sure to try to creep along.

> “Another thing…had my HydroWave on. I more or less used it as a distraction…walking around the boat, the boat official, any noise you might generate with your boat, the HydroWave puts out ‘positive distraction noise.’ Anytime I’m shallow, I have it on.”

Can you say what your favorite sound is on it?

What about your electronics — did you shut them off?

> “I had 3 of 4 units in sleep mode, with only my front graph on so could mark waypoints when I got bit.” 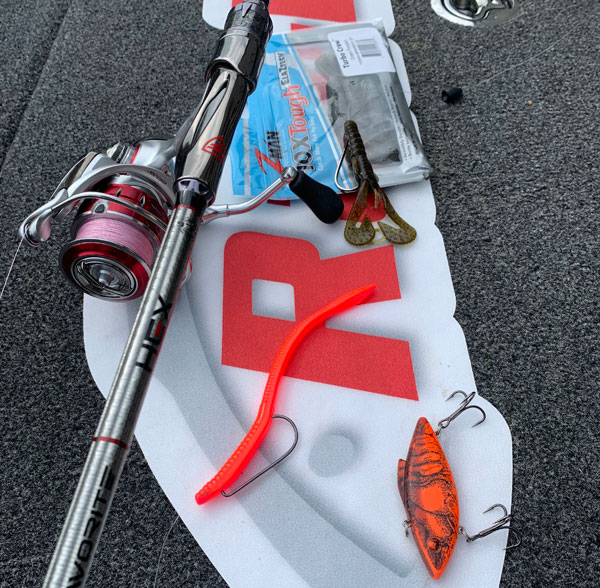 > Floating worm (merthiolate) — “It’s just an old-school color…growing up on the CA Delta, it’s always been a springtime thing. I feel like it’s a color a lot of people have forgotten about. I’m big on old-school stuff. It worked 50 years ago and it still works today. I keep these little things in my back pocket….”

> 4/0 Owner All Purpose Worm Hook — “That’s key…the [wire] gauge and size of that hook. When I was coming up, guys put a swivel on there…used it as a little bit of weight to help get that worm down. But I found that if you use a heavier-gauge hook, it will get down [8-12″] more natural on its own.”

> “It’s a 4-inch craw-style bait that has 2 big oversized pinchers on it that swim [and floats]. It’s not ribbed [like a Beaver but has] subtle ribs, It holds a big flipping hook very well, but the action is what separates it from any others out there.”

You can watch the whole thing go down on MDJ’s YouTube channel — here’s the vid: