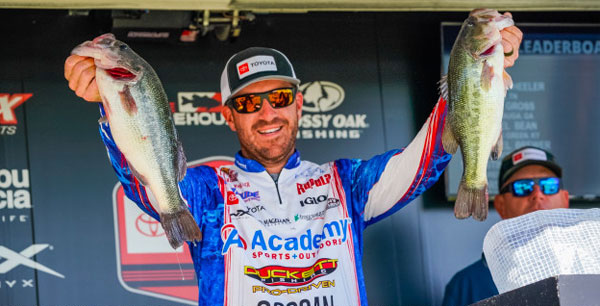 Jacob Wheeler — anyone ever heard of him? HAHAHA! Dude almost can’t not do well in a tourney at this point. Here’s how he won the FLW Toyota Series on Pickwick:

> “Basically the big thing I wanted to do was learn the lake. I wanted to fish the whole series if I could — a couple good friends of mine are fishing it, and I just felt like it’d be a fun time to get out there and compete, and learn something. Chickamauga I’m familiar with, Pickwick is on every tournament schedule…and Dale Hollow is a great fishery and lots of fun.

> “But on top of that, I wanted to learn the lake. And I also like fishing offshore tournaments. I enjoy looking at my graphs and trying to find them suckers, find place others don’t know about.”

Why he’d try to learn a lake during a tourney instead of just fun-fishing it:
> “With a little one [daughter] at the house, at this point I don’t want to leave as much as I used to. I think that’s the biggest thing.”

> “…seeing a lot of fish trying to make their way out [deeper] but were getting held up by the shad spawn. A lot of fish were in 4-8′ of water. It got to the point where I knew the shad spawn would be a major player.

> “I think a lot of lakes are behind this year, at least where I’m at. Floods, cold fronts — I think it’s definitely held them back.

> “…current running really hard. On the TN River you normally want current, but if you get too much, it makes it difficult because the fish don’t want to set up offshore where you can catch them easily.

> “They wanted to be out there, but the current was making them adjust and go places maybe they don’t want to go…. Sometimes they’d be behind a stump, sometimes on the front edge of the current — it wasn’t like it was always the same. It never was always the same pattern. So the goal was to find as many places as possible.

> “Tourney pressure was a large consideration — what I thought I might be able to get on, what I wouldn’t get on. It’s getting tougher and tougher to win offshore these days, so I like to find something not real obvious.

> “But some things I thought were obvious didn’t get fished, and some I thought were less obvious got fished a lot more. My goal was to have as many places as I could run….”

> “Cranking also is a way of catching big ones…reaction bite….” 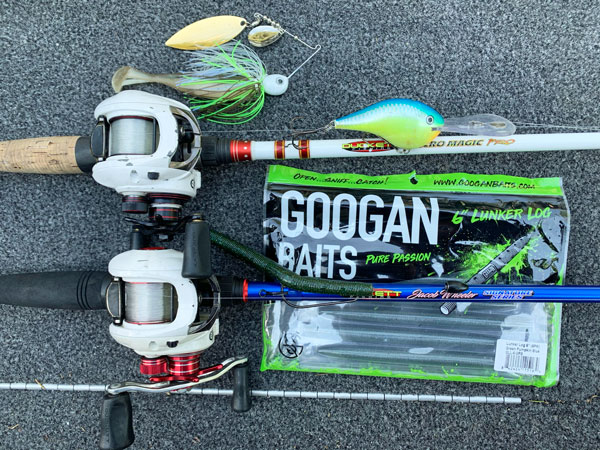 > “When the fish were a little tougher, or not as grouped up, and I couldn’t get them to bite a crankbait, I used an old-school worm. A TX rig is something we’ve thrown on ledges for years, but sometimes we forget about it. It was something not everybody was throwing. I could go behind guys and get a few bites.”

> “My 3rd presentation was the old-school spinnerbait I caught ’em on at Eufaula [his MLF BPT win this year]. …4″ Storm Largo Shad on the back to imitate a little-bit bigger-profile gizzard shad. That’s what I felt like a lot of those bigger fish were eating. I got a couple really good bites on that, but not a lot of bites.”

Jacob calls that spinnerbait the “Ole Big.” It’s made by a bud of his in IN who owns Accent Baits. It’s a 1-oz bait with a big CO/willow combo, listed on Tackle Warehouse as the J Wheeler Custom. He fished a few colors but his #1 was chartreuse shad. 7′ 3″ MH Duckett Wheeler signature rod, Duckett 360 Reel (6.3), 20-lb Sufix Advance Fluoro.

Most of his casts were upstream and he retrieved the bait with the current, “bumping it down through there.”

> He wanted to shout out TN’s Ricky Robinson (10th) for taking the time to follow Jacob back to the weigh-in one day because fouled spark plugs were giving Jacob motor trouble. “I ended up making it but he was a safety net…very nice of him to follow me in and make sure I was okay.”