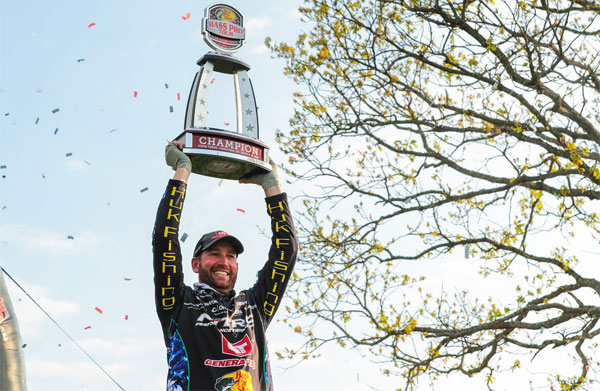 Ott went after ’em pretty much like everyone else at the Bass Pro Tour on Lake Fork, TX — with maybe 1 important exception — then under way different conditions at Athens caught ’em the way he likes to. Here’s the deets.

> “For me at Fork it was all about spawners. I kind of felt that way going in. …days of practice were really warm and the weather was going to be fair throughout.

Maybe why he caught ’em better than other guys to get into the final round:

> “Probably a little bit the baits — the fish were definitely pressured — and a little bit about areas. Certain pockets had more fish in them or were getting less local pressure, So many people down there were fishing.

> “You could run down the lake, think that’s a good-looking pocket and if there wasn’t someone in there you’d probably catch 1-2.

> “You couldn’t really run around because of all the timber. You can’t just run from pocket to pocket. I think that’s why more guys didn’t do well — you couldn’t run anywhere you wanted.

On the clouds during the tournament (cloudier than practice):

> “The swimbait is something I’ve used on beds before. Sometimes it really gets ’em aggravated.”

Why the Tokyo Rig:

> “The Tokyo Rig with that little dropper keeps that swimbait right off the bottom. It’s not something I’ve done a lot — I think those are the first ones I’ve ever weighed in competition on it.

> “When I first saw it and played with it some, that was my first thought — to do that…swimbait for bed fishing….

> “…how it holds the bait up…swimbait looks just like a fish…. It’s pretty much torture on ’em.

> “…75 miles south [from Fork], didn’t realize…how much further along everything was. When I put the boat in [for the 1 practice day] I was going around the banks looking for spawners, and saw a lot of empty beds and the fish on the beds were really small bucks.

> “I was coming around a point and fish were schooling on it. Threw in there and caught a 2.5, jumped off 5, caught a 4 — the 4-lber was pretty skinny and looked post-spawn. …no big ones on the bank, fish offshore in 7′ of water schooling — definitely post-spawn….

> “At that point I was fully committed to trying to fish offshore, and trying to find more schools like that.

> “I felt like I knew exactly how I would fish after practice. …thought it would be a lot of hard spots or edges of grass in 6-10′ of water with the jerkbait — that was my best bait in practice.”

How the competition day started:

> “…I tried the jerkbait, tried the crankbait, caught my first fish on a swimbait. Had the Neko Rig…kind of a cleanup bait for me offshore. So I had a bunch of options rigged up.

> “…once I got on that bridge [his winning spot]…wake bait on the surface and a bucktail [jig], but the crankbait was the main deal.” 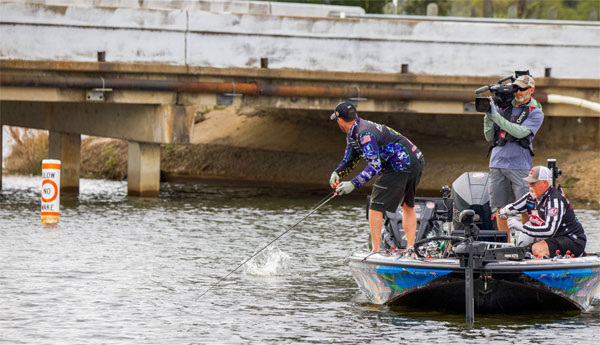 > “…practice…crossing the bridge to get to the ramp…fish schooling right beside the bridge. I idled through there, didn’t really mark anything so I thought a small pod of them was moving through.

> “I went [past the bridge] back into the creek and found a place where there was bunch of fish. …graphed on the way out and did mark a few fish, put a waypoint…didn’t even fish for them.

> “Pretty late in the 2nd period I went back in there. …idled through again, didn’t mark anything.

> “Over halfway into the 3rd period, I idled back out, nice and slow — I was hardcore looking at this point. And then right there they are, on side imaging, nearly where I made the waypoint that day in practice.

> “I stood up and threw my crankbait out there, The first 3-4 casts I could feel bait bumping across their backs, so many fish…. One finally gets it — a 2-lber. I get it weighed and…a million bass come up and some white bass.

> “I threw the jerkbait out there — I don’t know how I wasn’t snagging a bass…going nuts, yelling at the fish, “Somebody get on my hook.” Finally one grabs it, a 2.5-3 lber and I settled down.

> “I threw a hair jig and caught 1, then I got 1 on the wake bait…went through spurts like that…. 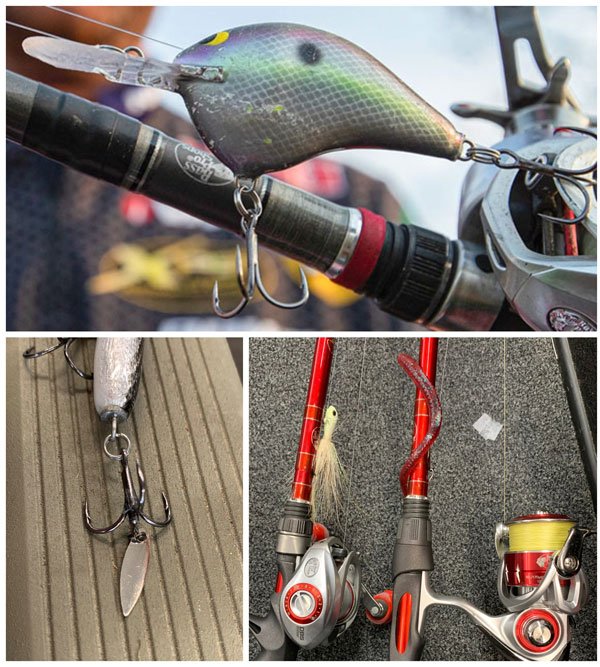 He said most of his better fish were caught on a crankbait:

He swapped the stock trebles with #4 VMC Hybrid Trebles:

> “It’s a hook I’ve got a lot of confidence in. I don’t use a treble-hook bait without that hook on it. A #3 is coming [possibly ICAST] which is what I’ll use in the future.”

> “One key — I should’ve done differently looking back, lesson learned — was using the VMC Hybrid Bladed Treble. I was putting the Bladed Hybrid Treble on the back of it, and I could actually watch the fish target that back blade. I should’ve put it on all 3 of them. They would target that one, which caused me to miss some because they were only targeting the back of the bait…dumb on my part. No question that bladed hook was getting the bites.”

> Only had I think 3 on the Neko Rig and a couple on a jerkbait. The Neko was the same setup as the wacky rig [on Fork] except a 1/16-oz Swagger nail weight and red bug worm.”

ALL the baits of the Guntersville 50th Bassmaster Classic!
How MDJ “won” Fork