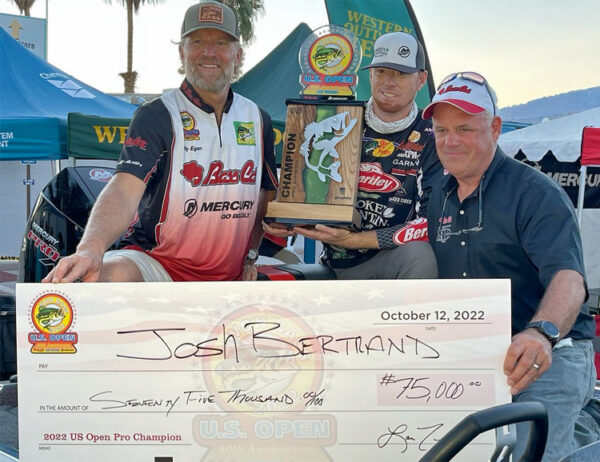 The WON Bass US Open is the biggest western tournament and has been won by some of the best ever. Pretty much every guy from the West wants to win that deal, including Josh. He’s stoked! Here’s how he got it done:

> “Going into it I thought the water would be a lot cooler than it actually was. …on Mead the weather is very similar – Mohave is a little hotter but not much. Typically it’s cool by now – you’re wearing pants and a sweatshirt or jacket in the mornings. It’s notorious that the first north front of the year always hits the week of the US Open.

> “…the weather forecast was clear and the water was warm, like 80, and the air temps were close to 100 all week. So basically a summer vibe.

> “I don’t have a lot of personal experience there. I was there 1 other time – I went for 2 days to scout in July….

> “You never know going into any tournament…my plan was to [fish shallow and deep] til I saw what I liked. I caught some fish shallow, but it was better offshore. And that’s a little more up my alley – if everyone’s throwing topwater down the bank, it’s hard to separate yourself. Plus I have more practice dropshotting for smallies than most guys out here.

> “The water level drops every year at this time like 10′ – for some native chub species. So it was dropping a 4-6 inches every day. That moved a lot of fish off the bank.”

> “The first day went as perfectly as you could imagine. I had a 23.5-lb bag and caught them all before 10:00. I had all day long to screw around and babysit my fish. It was great.

> “The 2nd day was a little harder but it was still pretty good. Not much happened in the first hour, but again I had most of my weight by 10-10:30. I was trying to save stuff because the lake was getting absolutely hammered. The shallow bite had dwindled and that pushed everyone offshore….190 guys fishing offshore you’re gonna have a lot of pressure.

> “These were not 100-fish schools. You might have a good spot and it has 3 bass on it. I felt like I saved a couple things.

> “Day 3 started really slow, I didn’t catch much. I started rotating through some less obvious stuff and occasionally checking my better stuff, and was lucky enough to get about 10 keepers throughout the day. I lost the biggest fish of the day with about 20 minutes to fish…but 5 minutes after that I caught a 4 and culled a 2.75-lber.

> “…was a lot of variety there, 20-45’…dirtier water you wanted to be a little shallower, and clearer water a little deeper. Earlier in the day you’d be up shallow, and later in the day maybe you’d have better luck out deep. I was running and gunning a lot. I probably hit 50+ places a day.

> “That lake is primarily rock and lots of zebra mussels. That’s why the dropshot is so good.

> “It’s got some grass, and that’s a really key deal. I don’t even know what they call that grass – it’s the same type of desert grass they have in those places. Get around that grass and there’s bluegill, baby smallies, baby stripers – there’s always bass around. Lots of crawfish too.”

> Berkley MaxScent Flat Worm (gp). “I started catching them on gp at the beginning of the week so I stayed on it. The last day I caught a couple on ‘brown back’ and black, just to show them something different.”

> “A lot of times you’d see them under the boat and drop…if you could see them a little further out and put it on their head I think your chances were better, especially later in the week when they were pressured.” 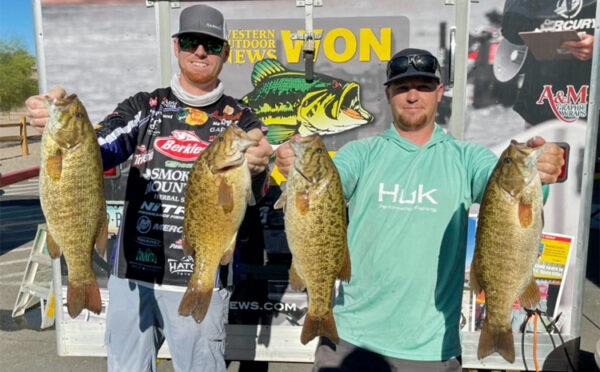 > “This lake has tons of carp, catfish and smallmouth. …LVS34 LiveScope transducer you’d be able to tell the difference in the fish…saved so much time. If you cast to every carp and catfish…would take so much longer to fish a spot.

> “2D…lot of times when the fish are down below you, 2D gives you a really distinguishable mark for a smallmouth vs a carp or catfish. A lot of times during the week [he used 2D for that and was like] ‘Wow that’s smallmouth’ and ended up catching the fish.”

> “This was emotional. This western tournament…doesn’t have near the press you get off wining a national-level tour event, but in my head it’s even more important. I’ve never been so nervous as I was all day [on day 3].

> “You look at the list of guys who have won [this tournament] – not that many have won. They’re the who’s who of western fishing. This is the most important tournament for me since I was a kid.

> “All the western fishermen I’ve been able to grow up around and learn from – I said it was like winning amongst my family.”

How Keith Poche won the Red River Open – after overcoming some sabotage??
How Keith Combs won another one at Rayburn