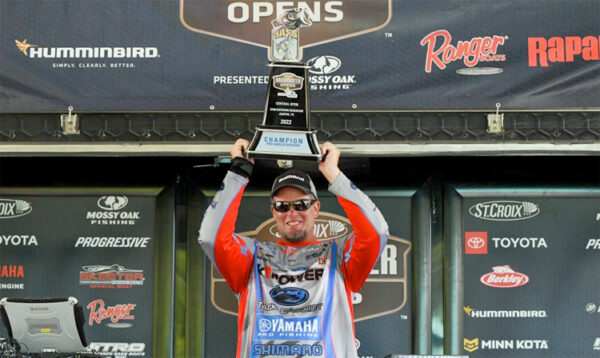 Keith Combs + 6XD + Sam Rayburn = win. That little piece of bassin’ math has been re-proofed many times over the years, and the most recent was this weekend at the last Central Open of the season. This time it wasn’t all about the 6XD though. Here’s how it went down.

> “I practiced probably 6 days, and every day it was 1 of 2 things. If I tried to fish a normal Rayburn pattern, it was very slow. I could catch a few big ones, but I couldn’t fill out a limit. I realized pretty quick that I had to find a few ways to catch keepers to fill out a limit…couldn’t catch big one doing it, I just had to piece it together.

> “Until this week we hadn’t had much cool weather…the baitfish usually would start to relate to the bottom – drops and channels in the fall – but they weren’t doing that yet. They were just out there on flats in relatively open water. The fish were out there chasing them but were not schooled. With how flat that lake is, those were expansive areas. It’s hard to target a big population of fish when they’re out there doing that.

> “I had a couple places where I was casting a worm to catch a few keepers, then I’d throw a crankbait and a jig on 1-fish type places hopefully to catch a big one every day.”

> “The first day I had a real late boat number and there was definitely a good bite in the morning. That day I felt like my timing was really bad. I think I boxed 3 keepers pretty quick, one 3-lber, and mid-day I caught one about 5 on a shallow ledge on a worm. I had a late weigh-in but my afternoon was nothing….

> “On the 2nd day I had a real slow morning despite getting out early. Mid-day I just randomly decided to stop on a place – I hadn’t practiced on it – and caught about a 5.5 on a crankbait. That was key.

> “Then later on in the day I filled out a limit…decided late in the day I had to make a few upgrades so I fished grass with a Thunder Cricket [bladed jig] and caught 6-7 keepers late. I thought that’s probably what I have to do – start out deep and go shallow.

> “So I was figuring out as the tournament progressed where I needed to be at certain times of the day….

> “…a variety of depths – no pattern out there honestly. I caught a couple fish on brushpiles in 15′ of water and a lot of my fish off hard-bottom areas. Some of those were in 4-5′, one was about 12′ deep and…had some isolated stumps in 6-8′ where I caught several key fish. The Thunder Cricket fish were in about 3′. Overall it was pretty shallow for Rayburn.” 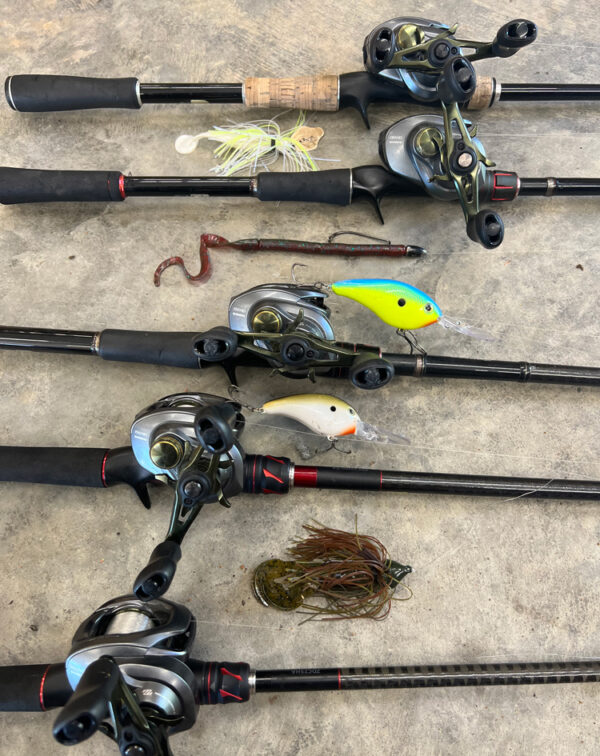 > “Mornings in practices I would fish to try to get a pattern going, and realized it got slow late in the day. So I sat down and graphed. The lake is 6′ low so a lot of my history is thrown out the window.

> “I was just graphing and trying to find something away from other competitors. I found 2 places that were out on flats – places I would never really think to fish, but I was looking for isolated cover. What I ended up finding was hard-bottom areas out on flats…small schools moved up on those places early in the morning and that was key.

> “Without really good side imaging to see those differentiations in the bottom, I would not have found ’em. I use Humminbird Side Imaging…that was everything.

> “I did use Mega Live – it just made me a lot more efficient. When I pulled up on places, like the area where I was fishing stumps, it just made it a lot easier to make those perfect casts. As far as seeing fish and targeting fish, I wasn’t doing that. I wasn’t fishing that way.”

> “Everybody. It’s been a trying last couple seasons, but all my sponsors, family and friends have been very encouraging – ‘Just do what you do,’ and that kind of encouragement really helps out…to get your butt in gear and go catch ’em.”

How Josh Bertrand won the Mohave US Open