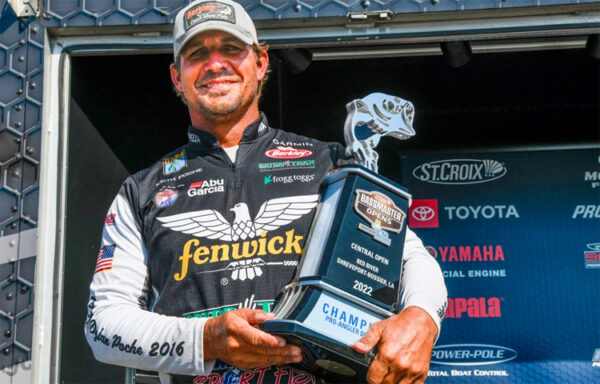 Congrats to Keith for bringing home an Open trophy after getting mighty close the last several years – but it almost didn’t happen because it sounds like one or more folks tried to sabotage his deal. Let’s get into it:

> “I found a little backwater deal off the grid with my Gator Trax boat with a 90-horse Mercury – 2 deep holes way back in there. There were a few fish in there and I was able to catch a decent limit each day…tried to manage them.

> “I had 11.5-12 lbs the first day, then I got out and went in the river. I didn’t fish much in practice… had Covid the week before….went out in the river, just fishing, just looking. I get on this rocky point, and catch one almost 3 lbs on a shakey head. I culled out a little one….

> “[Day 2] I go back in the hole and try to get a good little limit again. I catch about the same [weight and he went to the river again]. I fished the same place I got the big one, nothing. So I go up the river and fished laydowns – boom I catch one over 3 lbs. I weighed 13-03 again, how about that? I was leading, life is good.

> “I show up the third day, excited – I think I’m about to win this thing. I just need a solid limit outta there, 9-10 lbs. I get there and someone put rocks in front of my deal.

> “There’s rock levees all up and down the river…cuts in [them, some natural, some people did]. The Corps have left some of them open…. I didn’t touch a rock. I was going through a little opening in the rocks – you couldn’t get a big boat through there.

> “I get there that day – the water [level] hadn’t changed. There’s a moss line on the rocks, and you could see the rocks all the way around there had been turned up. Rocks were all sideways. [Someone put] rock all the way across [the opening], 2 inches under the water.

> “I’m trying to jump these rocks, and I’m on the phone with Hank [Weldon, Opens TD]…. These [spectator] guys are following me, and then they jumped in the water and started pulling those rocks out of the way like it originally was. I had a marshal with me [to verify what was going on when on the phone with Hank]. …filmed me going in and posted it on my social media.

> “I went in there – by that time it was 8:30-9:00 – and just stayed in there all day. I ended up catching a couple chunks. I was pitching laydowns in deep holes with a Berkley Pit Boss and I ended up with 11-something.

> “I got out early, weighed my fish, went and took a polygraph – I didn’t do nothing, didn’t break any rules – they gave me my money and the trophy and I left. They tried to get me bubba! They and didn’t succeed.”

> “The last day I ran outta gp Pit Bosses. I tried to throw another little bug, but I just have a lot of confidence in the Pit Boss. I had black/blue Pit Bosses – I put that dude on and they started eating that thing.” 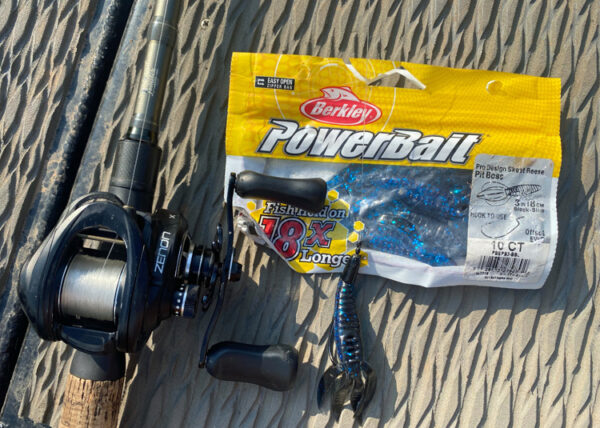 > “I’ve got a graph on my console so I could see where I was going, and I saw the water temperature and the time….” [He was laughing saying that.]

> “My Garmin Force trolling motor was a big key. I ran that 36 with a Lithium Pros, which is real light.”

> “I just want to thank the guys that pulled those rocks out. I don’t even know who they are. I don’t have a clue.

> “Gator Trax boats and my Mercury 90-horse motor. Without those 2 tools [and a pushpole] I couldn’t have gotten into those places.”