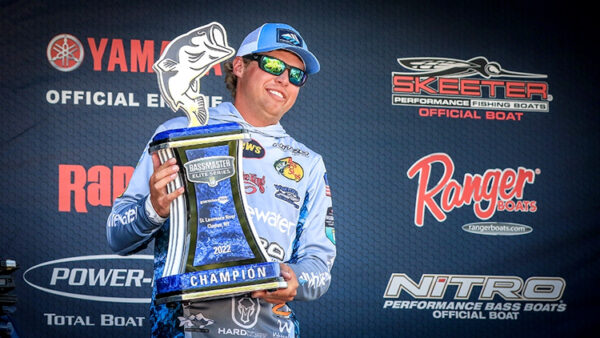 Someone maybe do this math: How likely is it that an Elite Series rookie wins an event, at a place he’s never fished before, with over 100 lbs of SMALLMOUTHS 🤯 when a Johnston brother also catches 100+ lbs??

Practice and his starting spot

> “Practice was a lot different. The tournament was perfect conditions, but in practice we had about a day and half to effectively fish the lake. I figured out what I figured out when the conditions were right.

> “It changed a good amount in the tournament – I was able to expand on what I found. I thought [his first spot] was good enough to keep me in contention, maybe a top 20 or top 30…. I didn’t think it was the winning spot til I realized how many fish were really there, and I had it to myself, and I could get there every day [about 35 miles] and catch ’em.

> “It was pretty subtle…basically a little bump out in a long strip of rocks, a ridge that came out of a bay…comes out into the main lake. On that bump-out, bait was everywhere for whatever reason…wads of bait in there and it never left.

> “The water quality was a little different – almost more tannic than the rest of the fishery, and I think helped a little bit. It was harder for the fish to get scared of boats [including the spectator boats he had]. …the Black River Bay – the Black River actually feeds the bay and shoots out into the lake…that water color is completely different than entire lake.

> “[He found the spot through] a lot of map studying and I have good experience with Great Lakes situations like that – i know how the fish like to set up.

> “The biggest thing is I knew what phase of the spawn they were in – basically every one of them was done spawning. The water temperature where I was fishing was a lot warmer than a lot of the rest of the lake was. So I knew they were coming out of the bay when they were done spawning…first stopping point before they got out to 30-40′.

> “There just happened to be bait on the spot that never left, and neither did the fish.”

> “The 1st day I struggled a little bit in the morning…. I ended up seeing one jump out of the about 50 yards out, slid out there and re-found what I found in practice.

> “Day 2 the wind picked up a little in the morning – they were still biting. I caught a low-20s bag, then the bite got kind of slow – it got really slick and calm.

> “I made my way to my secondary area, on the way back to the launch. It was completely different – super clear, almost sight-fishing…. It was a similar setup to the first spot – outside of a bay, about 3/4 of the way out…little bump-out of rocks [in 8-12′]…. There were hundreds of smallmouths on a bump-out that was maybe 80 yards.

> “Day 3 I ran the same pattern again. I started at my starting spot – slow day, I had 2 close to 5 lbs, then ran back to my 2nd spot to finish it out. They were still there, and I caught my biggest fish of tournament, almost a 6.75. I had almost 25 lbs again, and was done about noon. I was just excited to get back out there the final day, and was going to run the same pattern again.

> “You had to be persistent with them. They definitely got educated after a while, but every once in a while you could trick a big one into biting. You had to move around and find the active, feeding fish.” 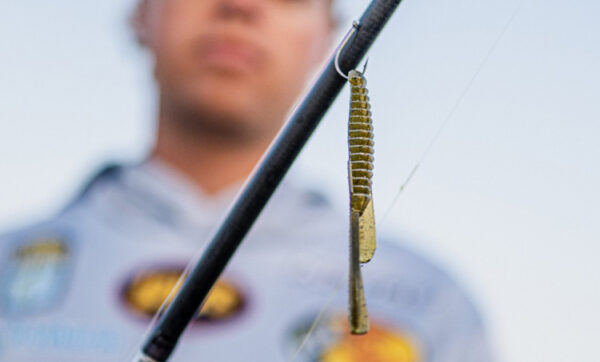 > “I was dropping it on them. If you could see them out 60-70′ [on forward facing sonar], that was the easiest way to get them to bite.

> “Another thing I figured out during the tournament was to speed up the dropshot pace. If they followed it down to the bottom, I’d rip it up a couple cranks, then let it fall down [etc.]. They’d chase it 2-3 times til they committed  to it – where if you let it sit on the bottom, they’d inspect it and just leave.”

> “I was using forward-facing sonar. I used it to find bigger groups [4+] of fish that would bite. …single out ones by themselves, they didn’t seem to bite as good.”

> “Strike King and Lew’s for sure – they went out of their way to get me that spinning reel and everything I needed for this tournament.

> “…Whitewater Fishing – it’s a new clothing brand that’s coming out with pretty cool stuff in the near future. They helped me out to get into Elite Series [meaning $].

> “I sight-fished about 1/4 of the fish at the 2nd spot because it was so calm. The WaterLand sunglasses I was using were a big key, especially for the sight-fishing deal. I was using the green mirror, which is basically an amber lens.” [Model he wore was the Waterland Ashor.]