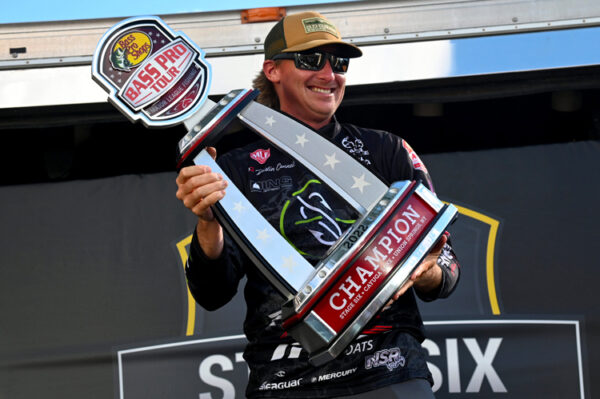 This was Dustin’s SECOND win this year, meaning he’s won 1/3 of the regular-season Bass Pro Tour tourneys so far. Fo sho not a small feat, and how he won this one was no small feat either. Here’s how it went down.

> “Going in I thought I’d be smallmouth fishing. Cayuga is predominantly a largemouth-known lake. It’s got grass in it – tournaments are won there with largemouth. Not a ton of people target predominantly smallmouth. But some big ones get caught….

> “I don’t think a lot of people know what lives in there. I thought if I could tap into that smallmouth deal it’d be awesome.

> “I basically committed my tournament to that after I saw that…. I didn’t know what the weights would be, I just knew it was a dang good deal.

> “As the tournament progressed I saw the largemouth weights start declining – 80 lbs, 50 lbs, 40 lbs. All that stuff was getting beat up because there was too much pressure.

> “By the time the Knockout Round came around…it was like I had the whole lake to myself [because he was just fishing for smalls]. I could run to any area I wanted to – I didn’t have any boats in my way…zero worry that anyone would be there.”

He dropshotted smallmouths every day:

> “I kind of transitioned from hard structure like stumps and maybe one boulder out on a flat, even brushpiles: Some places it looked like some people sunk brush. Anything that came up off the bottom…went from isolated places to catching suspended fish.

> “I was looking for them in 20-25′. I very seldom caught ’em deeper than 30. When I got out past 30, that’s where the majority of perch and rock bass and all that were staging. Shallower up in the grass [were largemouth]. But that transition in 20-25′, every fish was a carp or a 4-lb smallmouth.

> “The suspended fish were 3-4′ off the bottom. A lot of them were swimming, grouped up in groups of like 2-3. The best ones were bigger groups…get a little competition in there. You had to make the most accurate cast you could, and they’d all just swarm down on your bait. …key was using [Lowrance] Active Target and making really accurate casts.

> “The cloud cover helped out a lot, and those calmer days man it was so good. The biggest key was being stealthy because that water is super clear. If the boat was crashing on the waves, by the time you got near the smallmouths they would be spooky and wouldn’t bite your bait.” 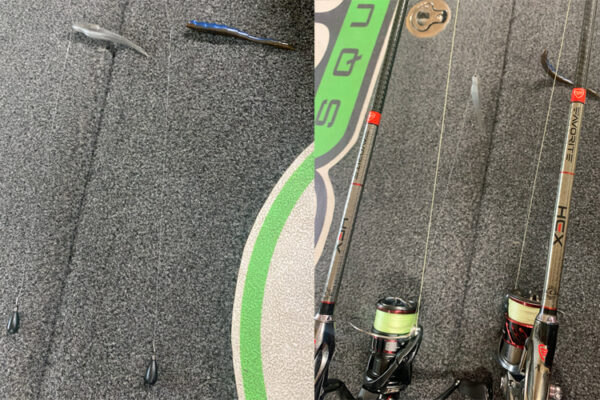 > 3.75″ soft jerkbait (grey ghost) and a Googan Drag n Drop (brown gill “for a goby-style bait – I weighed several key fish on that bait”). “When I got around structure – logs, rockpiles – and the fish were sitting still, I’d pitch way past them and drag that Drag n Drop through them…slow bite.”

> About the Gold Label fluoro: “That was a huge deal. That stuff is super strong. I could have used lighter line, but in our format that’s not very efficient so I got away with the biggest line I could. Gold Label is super strong but has a very small diameter.”

> “Active Target was a huge player…big key for me was to get on those flats and pan around. They would be sitting on the smallest isolated…anything on that flat: a stump a foot tall would have 3 big smallmouth suspended around it. It just gave them something to get around.

> “I couldn’t really see it on side imaging [small target], so I’d pan around and look for it, then mark it…isolated fish on small targets and suspended fish.”

How he caught the suspenders:

> “I’d drop it a few feet away and when they saw it I’d let it freefall to the bottom. …wanted that bait to get near the bottom – they’re way more comfortable near the bottom. If I got the group to go down on it, one of them would get it. The only way to do that was to see their reaction…with forward-facing sonar.

> “Anytime in the summertime, electronics will play big time.”

> He said the first hour or 2 of the day was generally the best.

> He weighed 4 largemouths and had a 4-lb smallmouth average.

> “The largemouths were just out there with the smallmouths…looked a lot different on my graph. They roam the grasslines. They use those grasslines as a highway…roam those edges. If want to slide up and eat something, they will.”

> “I wanna shout out Miller Tech [MTech Lithium] batteries. Man those batteries – I would stay on my trolling motor, panning, looking for fish all day long, and I never ran my batteries dead one day other than a [dawn to dusk] day practicing. I had 100% battery all the way til the last second of the tournament and that was a big key.”