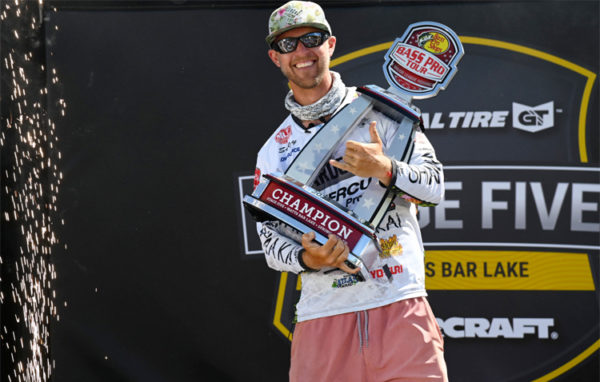 Whoa! AL rookie Ryan Salzman beat a final-day field hammers (including sizzlin’-hot Jacob Wheeler) to get his first major win last week. He did it fishing like he did in college, when he couldn’t afford the gas to make longer runs. Here’s the deets:

> “I was guiding a lot on Pickwick and Guntersville, and we were starting to catch a lot of fish dropshotting a pink Roboworm on the ledges. I was like, Man if I can figure out a bite [on Watts Bar] with that setup – on boat docks, points, brush or something – I think I’ll be good just catching fish.

> “It turned out to be really tough when we got there. First I went to the Ft Loudon dam…the closer I got to the dam [the water] got dirty. So I turned around, put the boat on the trailer and went down to the [Watts Bar] dam…scanning, marking brush and whatnot – finding structure, seeing where the fish were.

> “I got to that wall [where he won the tournament] at 2:30 in the afternoon. TVA was generating about 40,000 cfs and thousands of 1-inch minnows were along the edge of the wall in the current – and literally hundreds of bass were feeding on them, schooling. I camped there and decided to figure it out.

> “In the springtime I fish a lot of dams when I’m guiding. The ‘high side’ is the top of the dam – in college we used to fish those a lot in local tournaments. We didn’t have a lot of money for gas so we’d catch them close…. We figured out how to catch them close to those walls…in Wilson Lake especially.”

> “I had 14-something lbs day 1, and day 2 came in with 10 lbs which was enough to make the Knockout Round. But I lost 2 that day that would’ve given me 18 lbs so that gave me confidence to go back there….”

The first 2 days TVA didn’t pull current and the bass didn’t school like they did in practice, but days 3-4 they did and that was all she wrote:

> “The key to winning was TVA pulling current the last 2 days like in practice and the fish starting to chase the bait.

> “The sun was really key to getting them on the wall, and the current. Every morning the baitfish were off the wall about 20-30′ in their balls, 5-8′ deep. As the sun came up the baitfish would slowly rise to the surface…bass would come out and eat them a little bit and I’d pick them off with Active Target.

> “[When the sun came around to where it was full on the dam it] would put the baitfish right on the wall. Then bass would come up and feed on them, school and chase.” 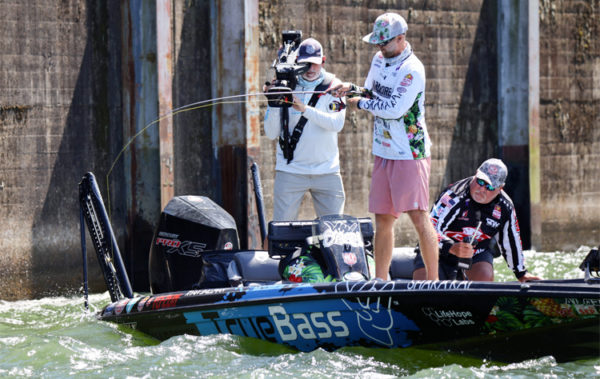 > Why the weedless rig sometimes: “I was fishing high side of the dam, straight vertical, 40-50′ deep. …metal grates that were intakes – they stuck out 4-5′. If I used an open hook I would get hung up on them.”

> Dropshotting: “I used [Lowrance] Active Target to see how deep they were, then I’d free-spool it to whatever depth they were at and just hold it and let it pendulum back. Some hit it on the initial drop, and some would follow it off the wall and eat it. If there wasn’t any current I’d pitch to individual fish and work them with the dropshot. 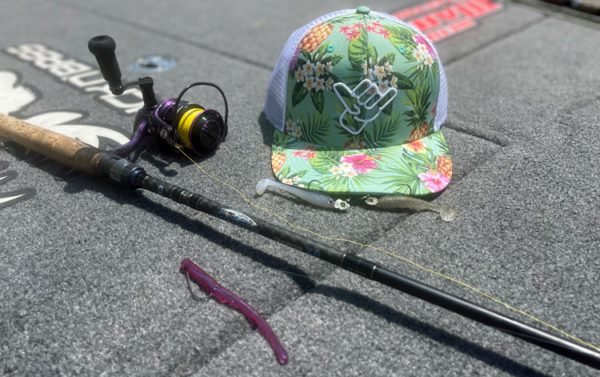 > “When they ran a lot of current, you couldn’t see the fish because they were so tight against the wall.

> “The key for me to catch extra fish was to pitch to fish roaming off the wall [using] Active Target.

> “The swimbait deal…the wind was blowing into the dam, creating lot of chop and distortion on the surface of the water. If the wind would blow, I would throw the swimbait – or [sometimes] if the current was on.”

> “Just shout-outs to all my sponsors and everyone who’s supported me along the way, especially my parents.”

How Brandon Lester won at Pickwick